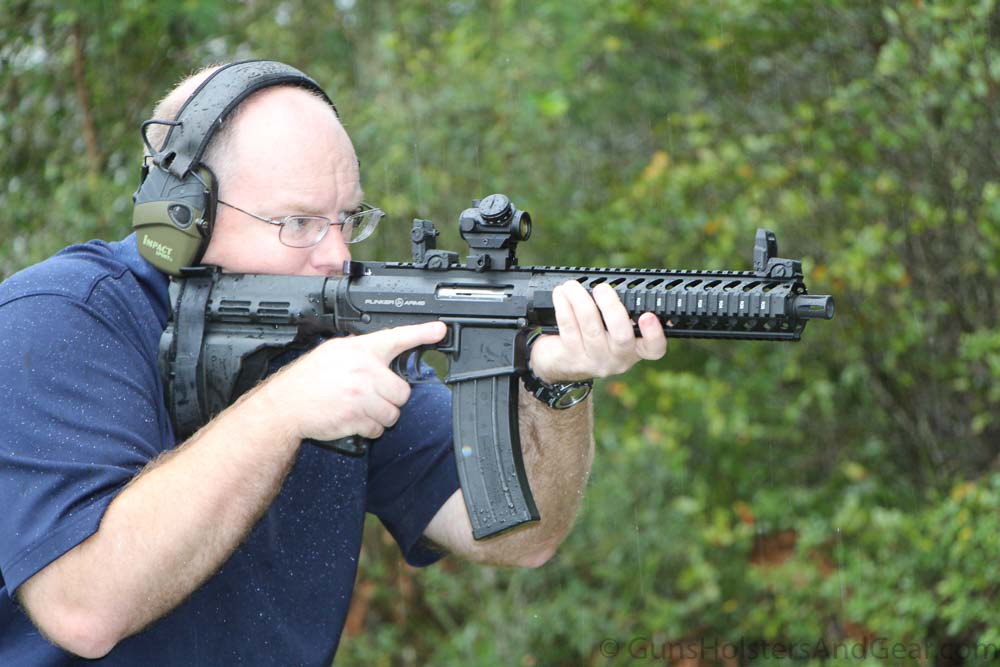 Looking for the perfect AR-15 training pistol? Plinker Arms has a new AR-style pistol with the SIGTac SB15 stabilizing brace that might be your ideal solution.

It has all the standard AR controls plus compatibility with a wide range of normal AR parts including triggers, pistol grips and more. But, it has something special that makes this gun exciting as a .22 LR handgun.

Plinker Arms (aka Plinker Tactical) appear to have gone out of business. None of the company’s websites appear to work. Additionally, I can no longer find any of the company’s guns, magazines or other products in stock at any retailer.

I know that Magpul sued Plinker Arms, but beyond that, I have no knowledge of what happened to the company. If anyone has additional information, please let us know in the comments section at the end of this review.

From a shooter’s view, the Plinker Arms .22 LR pistol operates identically to a standard AR-pistol. The charging handle, bolt release, selector switch and magazine release all work the same as a centerfire AR-15. The bolt holds open after the last round is fired.

When you pull the gun apart, you see some additional similarities and a number of differences. The lower appears identical. It also appears to use a standard trigger group, magazine release, pistol grip and bolt catch.

Plinker Arms designed this to be a blowback-operated pistol with a bolt carrier group that does not reciprocate. All of the motion is captured within the BCG. Consequently, there is no buffer tube assembly. Instead, a block is threaded into the lower. 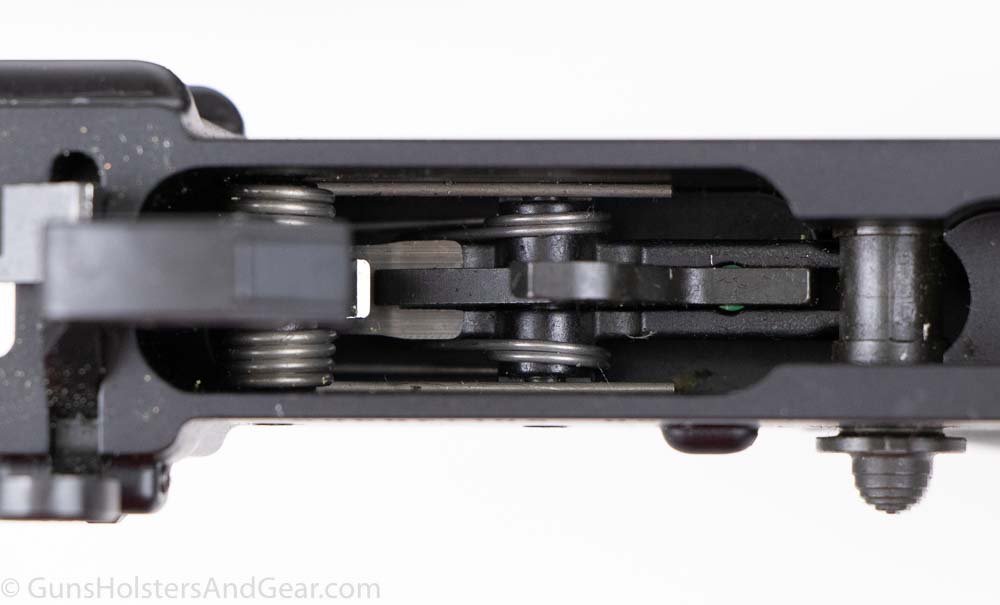 A 12.5″ barrel has an A2-style muzzle device. As you might expect, there is no gas block or tube.

Plinker Arms uses aÂ free-floated quad-rail forend to accept any number of accessories. Quad-rails are not light and with an empty magazine, the gun weighs in at 6 pounds 13 ounces. 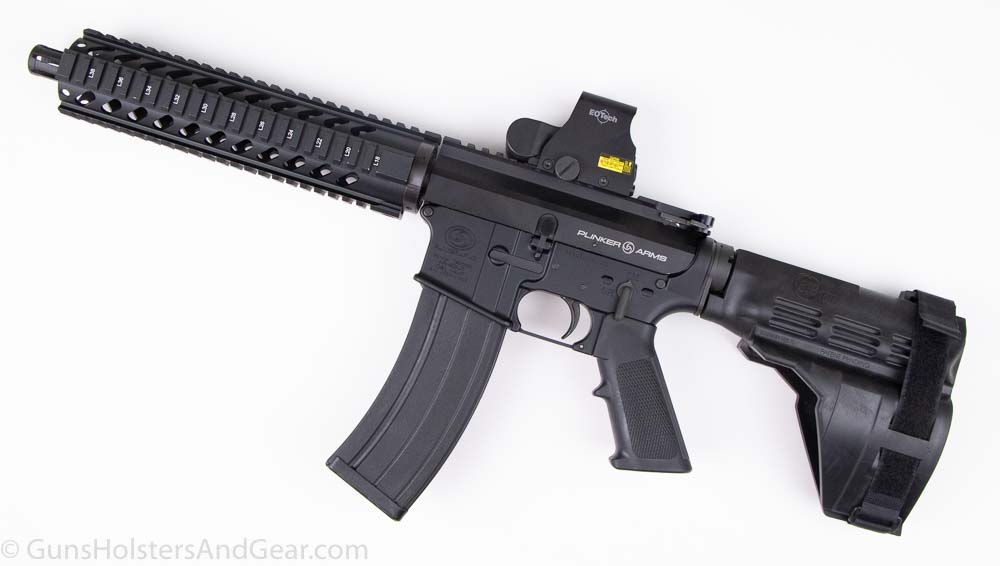 As it ships, the gun has no sights. I added a set of Magpul’s MBUS flip-up sights. I also tested the gun with the Bushnell TRS-25 red dot sight and the EO Tech XPS2 holographic sight.Â With a UTG medium profile riser mount, the MBUS perfectly co-witnessed through the Bushnell sight.

Since I tested the gun with the brace hooked to my forearm, I also attached a Streamlight TLR-2G to a side rail. This added a white light to the mix and would allow me to aim from unconventional positions with the integral green laser. 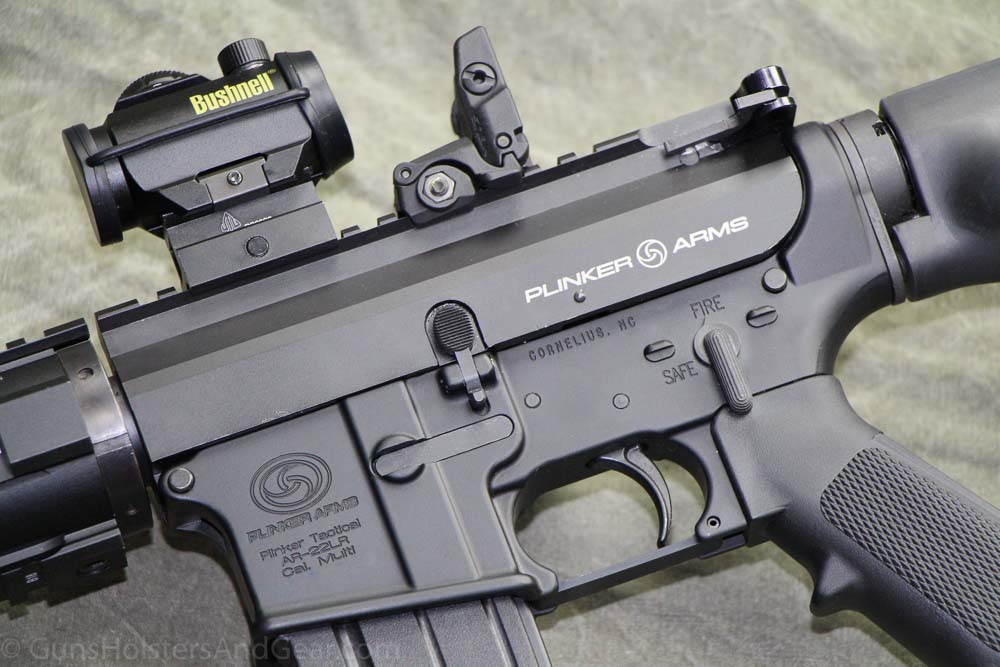 The gun uses proprietary Plinker Arms 10- and 25-round magazines. Mine shipped with a single 25-rounder.

I’ve shot a number of AR-style rifles with .22 LR conversion kits. Most of them worked well, but I was curious to see how different a purpose-built AR pistol would run when designed for the .22 LR cartridge.

Rimfire ammunition can be a bit finicky no matter what gun is involved. For me, the Federal and Winchester brand bulk packs seemed to provide the best reliability. During the first 50 or so rounds, I had about 10 malfunctions. After that, things smoothed out, and I had less than 1 problem in every 200 rounds fired. That’s not bad for a semi-automatic .22.

The only CCI I had handy was the company’s popular Stinger loads. These ran flawlessly in the Pinker Arms pistol.

As I mentioned earlier in this review, Plinker Arms ships the pistol with a SIGTac SB15 arm brace attached. An arm brace is designed to allow for better control of a large pistol when shot with a single hand. This can be of special assistance to anyone with upper body strength or injury issues. 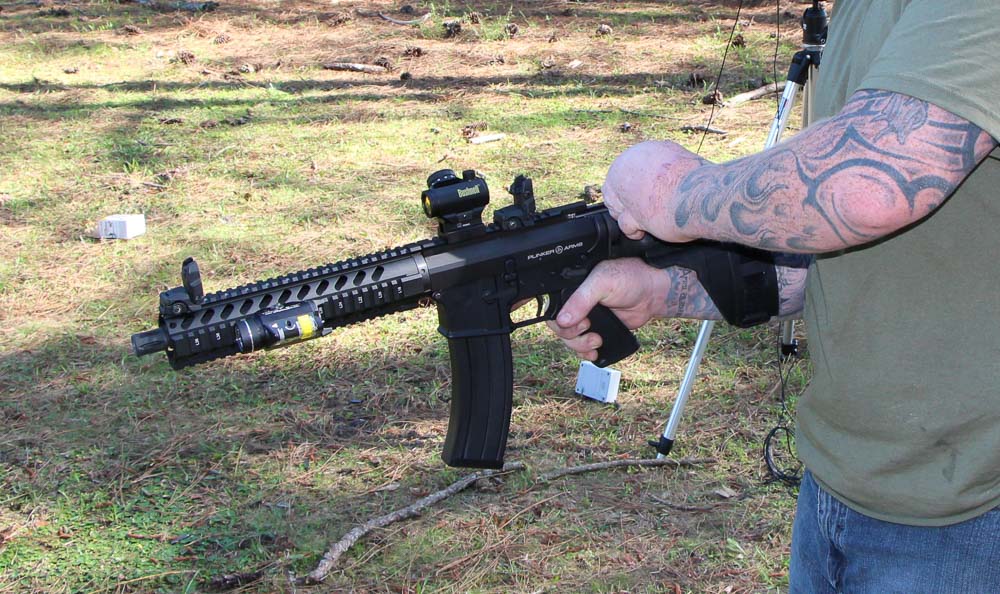 A friend of mine is a combat-injured retired Marine with significant injuries to one hand. He gave the gun a try with the brace and found that it helped his aiming and control of the pistol.

I also tried shooting the gun with the arm brace in its intended configuration.

If you are not familiar with the SB15, it is a bulky rubber brace that can strap to the forearm of the shooting arm to increase control of the gun while shooting one-handed. With the brace strapped to my arm, I could not use a traditional sighting method with the iron sights or red dot. However, if I canted the pistol about 45Ëš, both could be used.

With the SB15 brace attached, I found the best sighting method was using the Streamlight laser. The laser allowed me to accurately aim the gun in nearly any position. Probably the best control I had with the gun using the brace was from a â€œtuckedâ€ position close to the body. With my elbow tucked to my side, and the gun at just above waist level, I found the brace gave me excellent one-hand control of the gun. At the same time, the laser allowed for accurate shooting. 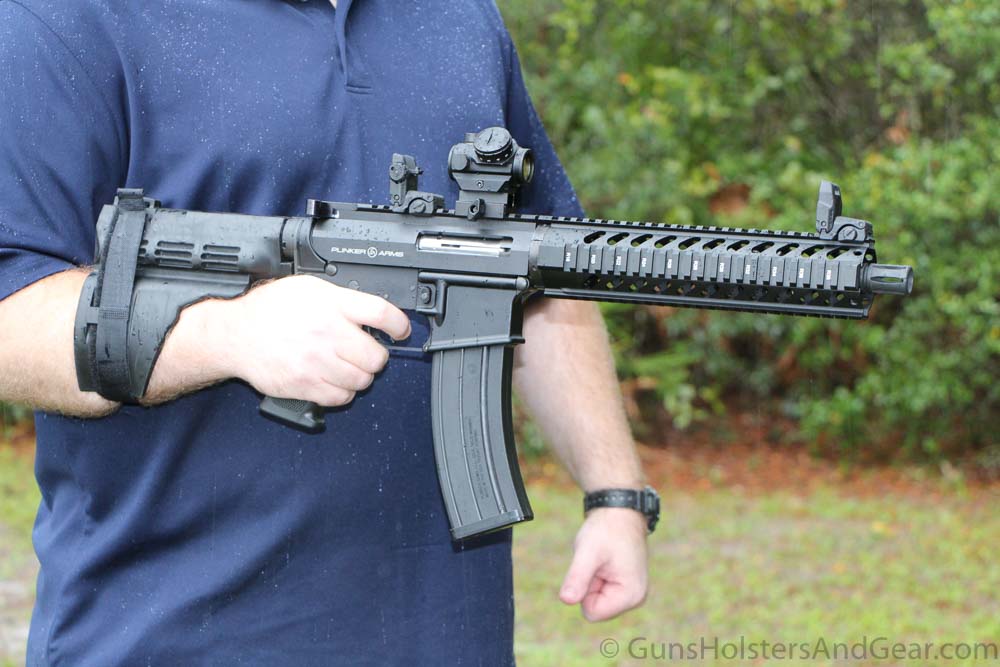 (Update: SIG Sauer no longers makes the SIGTac SB15 arm brace. I recommend checking out SB Tactical for any arm brace pistol projects you have coming up.)

Shooting without the brace clamped to my arm allowed for regular use of the sights and shooting positions.

Of course, many people use the arm brace as an improvised stock. Although not intended for this purpose, the gun can be fired in this way. For me, it provided the best control and accuracy. (If accuracy and control are improved by having a stock on a pistol, it makes one wonder why it is illegal to add one…) 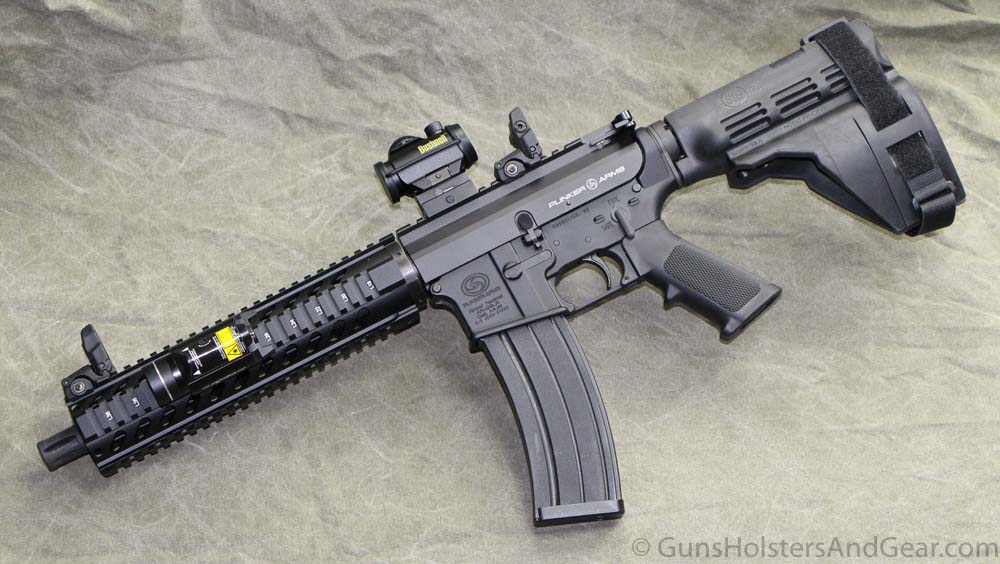 If you are looking for a rimfire analog for your centerfire AR-15, this pistol is an excellent choice. Operation and controls closely mirror that of a standard AR, allowing a shooter to keep his or her tactical skills sharp. But, unlike the centerfire equivalent, keeping the Plinker Arms pistol fed with ammo only nibbles at the wallet.

As I mentioned at the start of this Plinker Arms review, the company appears to have gone out of business.

If you are looking for an alternative .22 LR chambered AR pistol, I suggest looking at the HK 416 pistol. I’ve shot this gun and found it to be easy to operate, extremely accurate and even more reliable than the Plinker pistol.

The pistol in this article was provided by Plinker Arms for review. I also wrote an article about the gun for Harris Publications.

I was not paid by Plinker Arms to write the review, nor was I asked to provide a positive evaluation of the gun. All of the opinions are my own.

I do not have any financial interest in any firearms manufacturer.

Questions? Comments? Concerns? I welcome them all. Your thoughts are very welcome below. I just ask that everyone stay civil and refrain from the use of profanity. I want this to be a family-friendly site where everyone can find quality information on firearms.