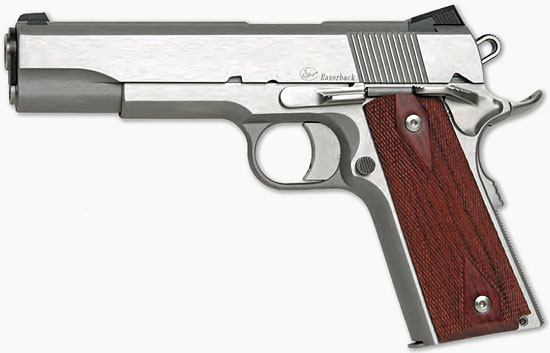 It’s back. Â For 2012, Dan Wesson is bringing back the Razorback 10mm pistol.

The Dan Wesson Razorback RZ-10 is a 1911-style pistol with a forged stainless steel frame. Â The slide and frame are both polished to a “soft” finish on the flat areas, while the rounded areas are sandblasted.

The RZ-10 has a 5″ match grade barrel. Â The grips are double-diamond cocobolo. Â The magazines take eight of the potent 10mm rounds.

Weight is measured in pounds: 2.40 of them to be exact.

Dan Wesson states the Razorback will be made in limited numbers, so don’t expect they will flood the market. Â I imagine the company will gladly ramp up production if demand outpaces production, though.

Discontinuing the Razorback, and then bringing it back due to customer demand mirrors what happened to Colt with their 10mm handgun, the Delta Elite.

The Delta Elite had been out of production for a number of years before it was reintroduced in 2009. Â See my article Colt Delta Elite Reintroduced at 2009 SHOT Show.

We expect to see the rebirth of the Dan Wesson 10mm at the 2012 SHOT Show.

When it was introduced, the 10mm Auto cartridge seemed to be the answer to everyone’s concerns about stopping power in handguns. However, concerns about controllability and accelerated wear on guns ultimately led to the development of the .40 S&W cartridge.

Nevertheless, the 10mm retains a significant group of fans. The 10mm is versatile allowing for hunting, self-defense and shooting matches.

While the Dan Wesson gun is a semi-auto pistol, the 10mm can also be had as a wheelgun. Check out my Smith & Wesson Model 610 review to see what a 10mm revolver can do.

I urge caution when reading some online 10mm reviews. While the guns have a greater amount of felt recoil than a .38 or 9mm, the recoil is very manageable. These guns have far less recoil than many people suggest. So, don’t shy away from them if you have a chance to shoot one.