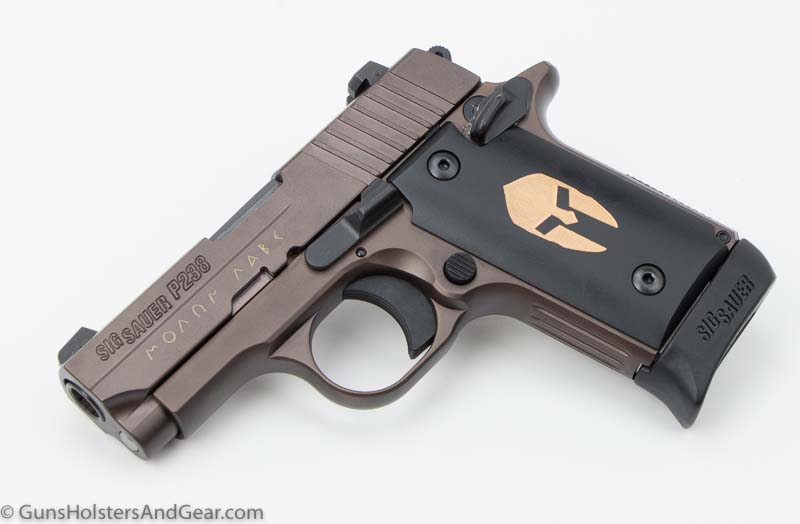 The SIG P238 pistol is a single-action, semi-automatic pistol chambered for the .380 ACP cartridge. Â The pistol is considered to be very similar to the workings of a 1911 pistol and is said to have borrowed heavily from the design of the Colt Mustang pistol. Â Most likely, SIG SAUER purchased the rights to manufacture the Mustang from Colt, though under their own label: the P238.

The P238 was introduced by SIG SAUER at the 2009 SHOT Show in Orlando, Florida. Â At that time, there were few quality .380 ACP pistols on the market, but the 2008 introduction of the Ruger LCP proved there was an untapped market demand for them. Â Unlike other manufacturers who were mostly bringing DAO polymer guns to the .308 ACP pocket gun market, SIG SAUER went with a high-quality gun on a metal frame.

The SIG P238 has an anodized aluminum frame and a stainless steel barrel and slide. Â The pistols are single action guns that have a frame mounted safety. Â P238 handguns also have a trigger bar disconnect safety, an automatic firing pin block and a Â hammer safety intercept notch to enhance the pistol’s overall safety.

In the first year of production, SIG only offered two variations of the P238: Â a standard black finish and a two-tone finish. Â The basic model was called the “Nitron,” which is the name of the special corrosion-resistant finish that gave the gun it’s black appearance. Â The Nitron was available with standard SIG “contrast” sights or night sights.

The two-tone model had a black frame with a stainless slide, slide stop, hammer and safety. Â The P238 grips were a stainless steel (silver) color. Â Both the original Nitron and the two tone models are still available from SIG SAUER.

The SIG P238 saw exceptional sales in it’s initial year, and sales of the gun have continued to be very positive. Â Since being introduced, SIG SAUER added numerous variations to the P238 line including various finishes, different grips and a variety of custom etchings.

At the 2010 SHOT Show, SIG SAUER introduced five new models of P238: Â the Rosewood, Blackwood, Rainbow Titanium, Equinox and the Tactical Laser. Â All five of these models remain in the current line-up.

The Rainbow Titanium P238 has an amazing multi-hue finish applied to the slide and other external parts. Â As the gun is turned, light reflects off of it in various colors, giving it a brilliance unlike any other in the SIG SAUER line. Â The frame is black Nitron and night sights are standard.

The Rainbow was formerly introduced at the 2010 SHOT Show, which was in January of ’10. Â However, the company had quietly released the gun in October of 2009.

The P238 Equinox was designed by the SIG SAUER Custom Shop, and features a number of things that make it unique in the line. Â First off, the front sight is a TRUGLO sight that combines tritium (night sight) with a fiber optic pipe, which gives incredible brightness in daylight and reduced lighting conditions. Â The slide and frame are finished in black Nitron, but the slide has a two-tone appearance as the high points have been brushed to a natural color. Â The slide stop, magazine release and the safety are nickel.

In 2010, one model of P238 was released with red laser: the SIG P238 Tactical Laser. Â The Tactical Laser model uses a unit that mounts to the front of the trigger guard, similar to the Crimson Trace Laserguard. Â The activation button is on the side of the unit. Â This pistol is otherwise almost identical to the two tone P238. Â The only other change is the grips. Â When originally released, the pistol had grip panels that were also two-toned. Â Current versions of this P238 have simple, black grips.

Introduced in 2010, but after the SHOT Show, was the SIG P238 SAS. Â The SAS has the same general design characteristics as other SIG SAUER handguns in the SAS line. Â The idea behind the SAS series is to remove all sharp edges (aka dehorning) so that nothing interferes with a draw when being carried for self defense.

Also introduced in 2010 was the P238 HD. Â HD stands for heavy duty. Â This model is the only P238 that has a stainless steel frame. Â All other P238 handguns have an aluminum frame. Â The HD also has G10 grips.

SIG later introduced the P238 HDW. Â This variation uses the same stainless steel frame as the HD, but features a set of rosewood grips instead of the G10 grips.

The SIG P238 Extreme was the only new pistol in this line announced at the 2011 SHOT Show. Â The Extreme was Nitron-finished and added numerous features the the pistol. Â The most obvious upgrade to the P238 Extreme was the addition of the Hogue Piranha grips made from G10. Â The grips have a unique color pattern and a fairly aggressive texture, allowing a better grip on the small gun.

At the 2012 SHOT Show, several new models were introduced, but the most significant change was the addition of ambidextrous safeties to a wide variety of the P238 models. Â Prior to this, ambi safeties were purely custom work on the handguns. Â Ambidextrous safeties are now offered as an option on many of the P238 pistols, while all of them can be retrofitted at the SIG SAUER Custom Shop. Â A retrofit includes the replacement of the grips to accomodate the new hardware.

Three new models were introduced at the Show: Â the Scorpion, the Black Diamond and the Desert.

The SIG P238 Scorpion follows the design cues from the company’s other pistols with the Scorpion finishing. Â The P238 Scorpion has a custom flat dark earth (FDE) finish and Hogue Piranha grips. Â The grips are made of G10 and have a unique, multi-colored pattern. Â The safety, slide stop, trigger and hammer are all a flat black. Â An ambidextrous safety is standard on the Scorpion.

The P238 Black Diamond is very similar to the original Nitron P238. Â This pistol has a diamond plate Â finish on the slide, giving the gun its name and distinctive appearance. Â The gun also has plain black grips. Â The Black Diamond can be purchased with the original manual safety or with the new ambidextrous safety.

The SIG SAUER P238 Desert pistol is a two-tone tan gun with a light tan frame and a darker brown slide. Â SIG describes the coloration as a “…two-tone Flat Dark Earth finish…” Â The pistol’s trigger, safety, hammer and slide stop are all finished in flat black.

The P238 Desert has a rubber Hogue grip that wraps around the front of the grip frame. Â The Desert can be had with the ambidextrous or right-side-only manual safety.

Not shown at the SHOT Show was the P238 Lady. Â The Lady is definitely a different looking pistol than the others in the line. Â The frame is finished in red Cerakote, while the black slide is emblazoned with gold scrollwork and a flower inlay.

At the 2013 SHOT Show, SIG Sauer showed several new P238 models including the P238 Tribal. Â The new Tribal has a black frame and natural stainless steel slide. Â The wood grips feature an engraved tribal symbol. Â The same symbol isÂ repeatedÂ on top of and on the sides of the slide. 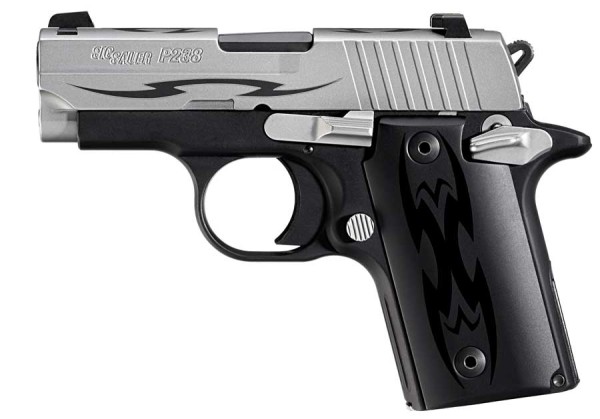 In addition to the standard variations, there have been some limited production runs including models commemorating the US Marine Corps, the Liberty Bell and the Gadsden Flag. Â Here is information on a few of these.

The P238 Liberty is a Rosewood model with a 24k gold inlay of the Liberty Bell on the top of the slide. Â The bell is between the rear sight and the ejection port. Â On the right side of the slide, the words “We The People” is also printed in gold.

The Gambler is similar to the Liberty model above. Â It is also a Rosewood model, but has a hand of playing cards on top of the slide where the Liberty Bell would be on the other model. Â The cards? Â The dead man’s hand of course: Â a pair of aces and eights. Â That is the same hand that “Wild Bill” Hickik supposedly had when he was killed in 1876. Â On the right side of the frame are the words “The Gambler.”

The Gadsden model of P238 was shipped from SIG SAUER with the words “Don’t Tread On Me” printed on the slide. Â On top of the frame was the famous coiled snake found on the Gadsden flag. Â SIG also made a P226 with the same theme.

The US Marine Corps edition was another Rosewood model with gold inlay. Â On this gun, the traditional USMC bulldog was on the slide with the words “Semper Fi” on the right side of the slide. Â SIG sold this model alone or with a commemorative knife.

I purchased a Sig Rainbow 238 and now the finish is wearing off, and it was bought new. I haven’t carried it maybe, once a week. Should it last more than that??? I paid a lot of money for the finish to already be already visibly wearing off. I will be calling Sig…