Ruger announced a new piston-driven AR-15 rifle: the Ruger SR-556. Â Announced at the NRA convention, the SR-556 is a completely new line for Ruger, and part of an obvious effort to redefine the company.

The SR-556 has a host of quality features, the most significant of which is the two-stage piston system. Â But, in a market that seems to have an overwhelming number of AR-15 makers, will the SR-556 be interesting enough to survive?

The “black rifle” market is clearly hot, as AR-15’s have been selling extremely well throughout the United States. Â Some manufacturers have stated that orders are backlogged six months or more. Â Bringing a new AR-style gun into the market now may be good timing for Ruger, as a scarcity of all AR rifles may push more customers intoÂ their rifles. 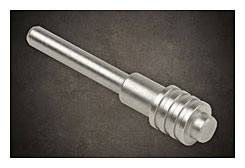 The piston system promises enhanced reliability because you are not sending all of the by-products of a fired cartridge right back into your bolt. Â While good weapon maintenance is still the best way to guarantee a functioning firearm, a piston system does, in theory, make sense.

The SR-556 features a hammer forged, chrome-lined barrel, and is chambered for 5.56 ammunition (and will shoot .223 also). Â The barrel is just over 16″, and has a 1:9 twist, helping to ensure the stabilization of heavier bullets.

Sighting is handled by flip up/down iron sights from Troy Industries. Â This is the same style sights that I have on my own AR. Â I much prefer a front and rear I can flip down, rather than the more common AR sights. Â However, the SR-556 is a true flat top rifle, so adding a EO Tech or other optic is extremely easy.

The SR-556 also offers a number of other nice add-ons. Â For example, the rifle comes standard with a quad rail from Troy Industries and a Hogue grip.

Retail is set at $1995. Â While there are some nice features on this rifle, even in the currently inflated market, I don’t think this is a terribly aggressive price point for Ruger. Â First, there are already a lot of AR-15 manufacturers on the market, with a great number of them selling rifles that are half as expensive.

Second, Ruger is not known as a “tactical gun” manufacturer. Â The closest thing Ruger has in their line is the Mini-14. Â While the Mini-14 does fill a niche, it is not known for great accuracy, especially when stacked up against a lot of standard AR-15’s. Â While I suspect the SR-556 will prove to be very accurate, Ruger will have to overcome the accuracy shortcomings of the Mini-14 in some peoples’ minds. 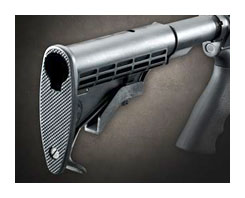 Another negative for me on the SR-556 is the plain M-4 style buttstock. Â I’ve never been a fan of the six position, collapsible buttstock found on the majority of AR’s out there. Â I much prefer the Magpul CTR-style buttstock. Â As Ruger is already working with Magpul on this rifle, the CTR seems to be the no-brainer addition to the SR-556. Â And, at almost $2000, having a nice buttstock would be more likely to get my wallet out of my pocket.

My overall, initial impression of the SR-556 is that it has a lot of nice features, including a piston system, which will make it attractive to a lot of potential buyers. Â I just don’t know if a $2000 price tag on a new, untested firearm will scare off most of the buyers.

Eric Shelton at the Handgun Podcast (no longer produced) has a great interview with Todd Wilkinson, the Chief Engineer for Rifles at Ruger.Â  The interview covers the new Ruger SR-556 that was introduced last week at the NRA Meeting in Arizona.

For those just hearing about it, the Ruger SR-556 is Ruger’s new AR-style rifle that uses a two-stage piston rather than direct impingement, which promises greater reliability.Â  In the interview, Wilkinson states that they have been running one of the SR-556’s without cleaning or lube for 15,000 trouble-free rounds.

Other information that Wilkinson provided:

Shelton also notes that Ruger is not making the lower receiver (no surprise, as a lot of manufacturers are not).

Something that may be of interest to a lot of current AR owners: Ruger may sell the upper assembly alone in the future.Â  This would allow the average guy to bolt on a pistol system with little fuss.Â  (Yes, I know other companies are selling retro fit kits, etc., but I think Ruger would be the only major manufacturer to do so.) 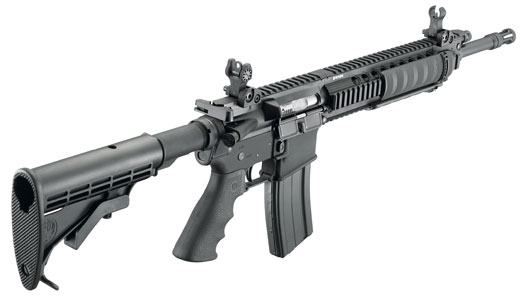 Ruger announced the release of a new SR-556 rifle chambered in 6.8 SPC. Â The rifle is based on the original SR-556 design, using a two-stage piston for improved reliability and clean running. Â The design has proved to be quite popular with the buying public, and the new 6.8 SPC version has the potential of really opening up this cartridge to a broader audience.

Wow. Â I knew Ruger was ready to release a new product, but I believed we would be seeing the rumored SR40 pistol, not another rifle.

What I find to be very interesting about this product launch is two-fold. Â First, Ruger making a major product announcement for a 6.8 SPC rifle really gives this cartridge a big push into the mainstream. Â Secondly, Ruger has undoubtably sunk a significant portion of their money into this product meaning they believe there is a strong market for this gun. 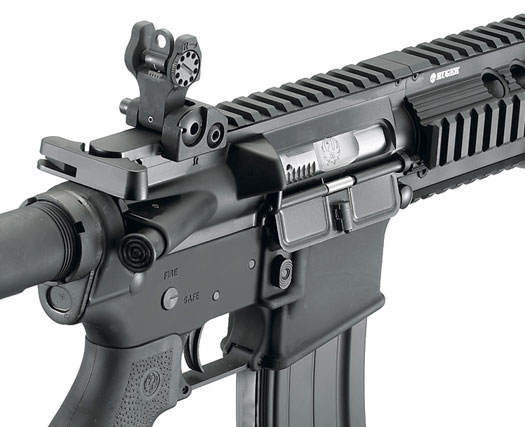 The Ruger SR-556/6.8 SPC will ship with a five-round magazine and two 20-round magazines. Â The 16.12″ heavy barrel is chrome lined and has a 1:10 twist. Â Additionally, the barrel is threaded and outfitted with a regular SR-556 flash suppressor. Â This is the same flash suppressor used on the Mini-14 and has proved to be quite effective at reducing the muzzle flash.

At some point, Ruger ceased offering 6.8 SPC chambered SR-556 rifles for sale. Â I can only assume this is because they were not selling well. Â However, the company still offers a 6.8 SPC upper. Â The upper specs are the same as they were when the rifle was being sold complete. Â The upper ships with the folding sights and retails for $1,499. 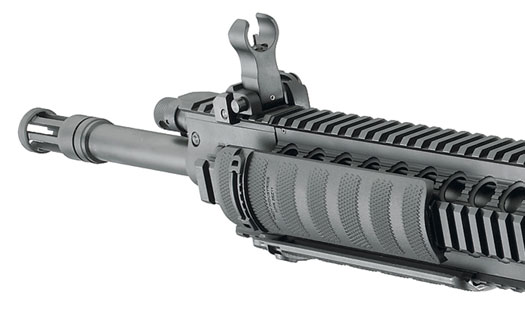 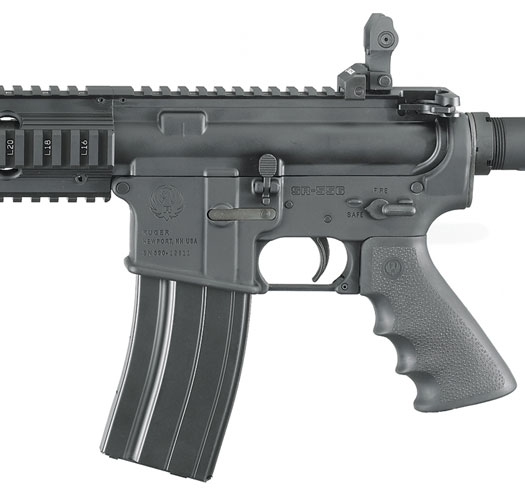 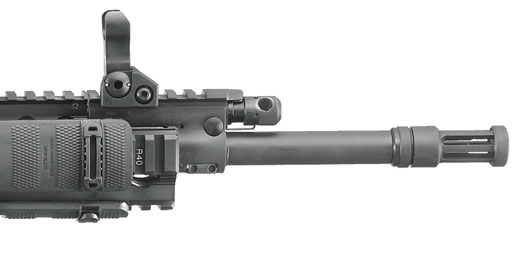 Another of Ruger’s new product announcements for 2013 is the new SR-556VT rifle. Â A variant of the company’s piston-driven AR platofrm, the SR-556VT appears to be set for long range accuracy shooting with a fixed stock and 20″ barrel. Â As you might guess, the VT stands for “Varmint Target.”

Since this model is designed for hunting, it sells with three, fice-round magazines. Â However, the mag well is standard, meaning the shooter can add his or her own 10, 20 or 30-round magazines.

The SR-556VT comes without iron sights, but has a full length Picatinny rail for adding any kind of optic or sight system you might like. Â I imagine most people would want to add serious glass on top of this one. Â Some type of back up iron sights might be a good idea as well.

The barrel is 20″ long and has a 1:8″ RH twist, which is generally good enough to stabilize heavy .223/5.56 bullets. Â The stainless steel barrel is cold hammer forged with a target crown.

The bolt and carrier are both chrome plated. Â The trigger is a two-stage that Ruger describes as having a short “take up” and a light, crisp break without creep orÂ over travel.

As with the other guns in the SR-556 line, this Ruger rifle uses a piston system and has a four position gas regulator. Â The adjustable regulator allows the shooter to tailor the rifle performance to the type of ammunition being used. Â One position even allows the shooter to effectively “turn off” the system, allowing for manual cycling of the action only. Â While this might be puzzling to some, anyone running a suppressor knows that the action cycling can create a lot of unwanted noise.

Purchased a sr556 for$1575.00 Wanted a piston ar But nothing else is avalable. Had good luck with my other rugers,this is a great looking ar and has a lot of nice features included.So realy this purchase was a no brainer. Took it to the range and at 50yds was already on the paper. A few tweeks of the Troy sights and I was shooting nice groups.The weapon worked flawlessly and is a lot of fun to shoot.
Can’t wiat to see how it works with some optics on it.For my money I could not be happier. Two thumbs up to Ruger.

Had my dad pick one up for me as im in afghanistan at the moment! Said the thing runs like a champ. Have used to gas operated systems for the last 11 years of my military service, am interested to see the other side of the spectrum.

I’ve been hearing good things about the SR-556, so I think you will be pleased when you get some time with it. Thank you very much for your service! Come home safe and soon.

Richard,
thanks, i heard good things as well and did as much research as i could for where im at. I acquired a decent military grade aimpoint and some other goodies for it. One of the perks to my line of work free stuff!! Will deffinately post the outcome of my testing when i get a chance to put it through the paces.

A new upgrade system for the Ruger team (military/LE)…a new SR556 with longer barrel, 2 lb drop in the 7 lb trigger pull, carbon fiber to replace rails making it lighter(and to deal with the rising heat problem from excessive shooting), ceramic bonding in piston unit to deal with carbon there, opt for panther grips and match grade butt. Ruger, you have a great platform and the piston system sounds like a winner. [I have four Rugers…and, now looking at a fifth.