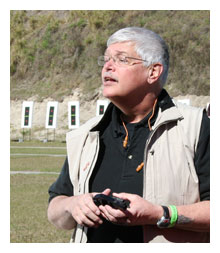 Each program is about an hour, and comes out on Wednesdays.

Podcasts, if you aren’t aware, are audio or video recordings published on the Internet in a fashion similar to syndicated radio or TV shows.Â  Most podcasts are free, and many are produced by the average guy or by a small business.Â  If you have a computer with an Internet connection, you can download and listen to podcasts.

Firearms podcasts used to be hard to come by, but that is slowly changing.Â  Folks like Mark Vanderberg and Kenn Blanchard pioneered firearms podcasting, and have since welcomed many more voices to the Internet “airwaves.”Â  Bane’s program is one of several I always listen to.

Always entertaining, Bane brings a diverse background of experiences in the shooting and outdoors world to the table.Â  Unlike a scripted TV show, he is able to talk freely about any subject that comes to mind.Â  The lack of script and time constraints allows the audience to hear more of the back story about the host or the product(s) and people he is reviewing or interviewing.

Because of this, I learned a great deal more about the recent Tennessee law allowing concealed weapons into restaurants.Â  On this specific topic, Bane was able to relate personal experiences from his time in Memphis, which gave me deeper insight into the issue.

Bane’s never one to pull his punches when it comes to discussing politicians and Second Amendment issues.Â  If someone is acting like a idiot, he’ll be the first to step up and say so.Â  In fact, he frequently states “If I haven’t offended you this week, don’t worry, you’re on the list.”

That being said, I get the distinct impression he will pull punches when it comes to sponsors.Â  Frankly, that is good business sense.Â  After all, he would be a fool to bite the hand that feeds him.Â  However, the listener should keep this in mind, and critically evaluate the information when Bane is talking about a sponsor’s new product.

An unexpected bonus to Down Range Radio is the intro music Bane plays.Â  An old-time writer for Rolling Stone, Bane has a keen appreciation for a wide range of music.Â  Bane starts the show each week with a different tune.Â  Frequently the tune will foreshadow some of the discussion topics.Â  More than once I have listened to his podcast, and then pulled up iTunes to purchase the intro song I just heard.

I think this is a great podcast, and it is worth listening to no matter what kinds of shooting you enjoy.Â  The podcast is free and worth at least double that!Â  Take a listen; I doubt you would be disappointed.