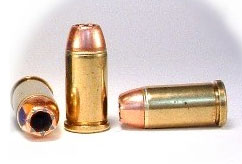 Buffalo Bore uses virgin Starline brass and low flash powder. Â It is not clear which bullets are being used in these loads, but Buffalo Bore tends to use quality JHPs for self defense loads.

In recent years, there has been a rise in interest in revolvers chambered for the .45 ACP.Â  The .45 Auto Rim is essentially a rimmed version of the ACP, allowing the shooter to shoot similar loads without the need for moon clips. Â In other words, these rounds drop into a .45 ACP chambered revolver just as a regular rimmed .38 Special round works in a .38 Special chambered revolver. Â For reloaders, having the brass for the auto rim cartridge has provided them an easy way to shoot these guns without the need for full- or partial-moon clips. Â If you’ve ever shot a gun that required any kind of clips, you know it is a pain to fiddle with the darn things.

In the past, the .45 Auto Rim has not had a large following, partially because of the lack of quality ammo loaded for it.Â  However, these loads from Buffalo Bore appear to be very powerful loads.Â  They should capture the attention of the .45 revolver enthusiasts.