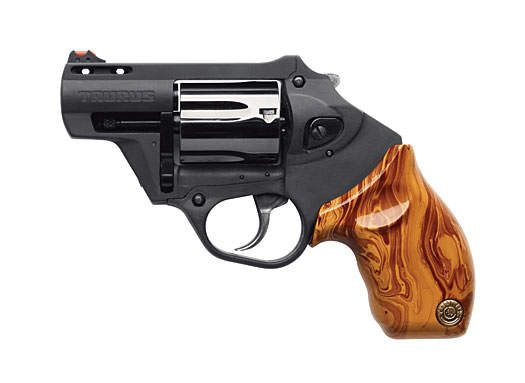 Taurus introduced a polymer revolver in .38 Special at the 2010 SHOT Show.  The “Polymer Protector” is a revolver with a polymer frame and blued steel cylinder and barrel insert.  The new Taurus revolver only weighs 18.2 ounces and is rated for +P ammunition.

Streamlined for concealed carry, the hammer is shrouded, but can still be cocked for a single action shot.  The grips are polymer, but are wood colored, and actually look good in person.

The front sight is a red fiber optic sight, and the rear is a notch.  The barrel is 2.5″ long.

I was very impressed with the way this revolver felt in my hand.  It was lightweight and pointed naturally for me.  I would prefer a DA-only version, but I am still impressed by what Taurus was showing.  I look forward to getting one of these onto the range. 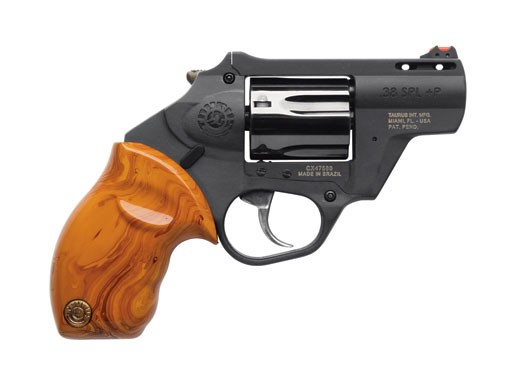 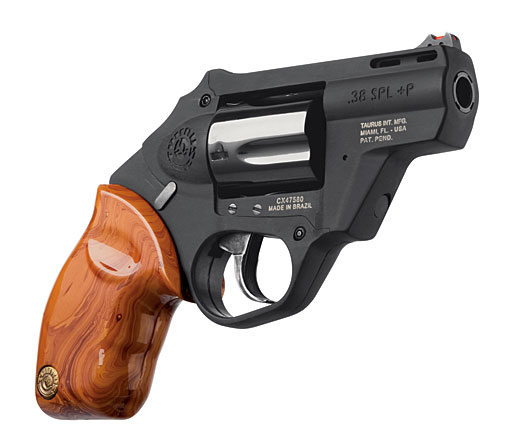 The original Taurus Protector Polymer has been replaced with a new revolver that ups the ante to .357 Magnum.  The new gun looks very similar to the original, but it is beefed up.

The new version of the Protector weighs a little more at 19.75 ounces.  The barrel length is now 2″ long.  The front sight maintains a fiber optic sight with a notch rear.

The gun keeps the partially shrouded hammer, which can still be cocked for single action shots.  As I’ve said before, I prefer a DAO (double-action-only) trigger on small revolvers for self-defense, but this is not a bad way of handling things.

The original wood-look grips have been replaced by more aggressive rubber grips which should help a shooter hang onto the gun and cushion the recoil from the Magnum rounds.  Of course, many people will prefer to shoot .38 Special from the gun instead of the full-bore Magnum loads.

The down side of polymer is the taurus 38 weighed 18 ounces, a SW model 637, 642, airweight all weigh about 15 ounces and cost about the same….I own several and the double action triggers are great….although the Ruger trigger is just as good…so my question is why buy the polymer when the SW is the same cost….I carry either the 637 or Glock 43 (19 ounces but 7 shots of 9mm instead of 5 at 38+P..) so it seems like other than some newer look you don’t gain anything. Am I wrong? Oh yea, I know a guy who dropped his Glock 19 while bow hunting…he went back and found it the next day and the rats had knawed the heck out of it…..