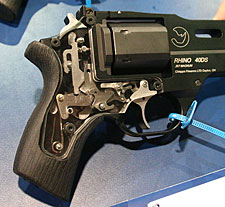 Lastly, the trigger and cylinders were very stiff.  This is likely due to the staff using early samples.  However, I do not understand why you would bring less than your best product to a trade show.  I hope that the production models will be smoother.

Retail runs from “about $750” to “about $950” depending on the model.  Chiappa believes they will begin shipping later this year.

This video is of the 2″ Chippa Rhino revolver chambered in .357 Magnum being fired.  The lack of muzzle flip is pretty impressive, as is the fireball that a short barrel .357 Magnum can make.

The load was the .357 Magnum Federal Classic 125 grain JHP.  Watch the target video in the upper left corner as it is fired.  Combat accuracy/speed appears to be very good.

The Chiappa Rhino revolver is now shipping to distributors, and should be hitting your dealer shelves very soon according to the Tactical Wire.  The 2″ Rhino chambered in .357 Magnum is on the trucks and rolling out, with the other Chiappa revolvers to follow in the near future.

MSRP on the different models: 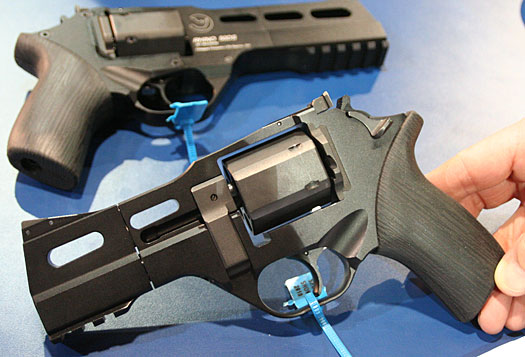 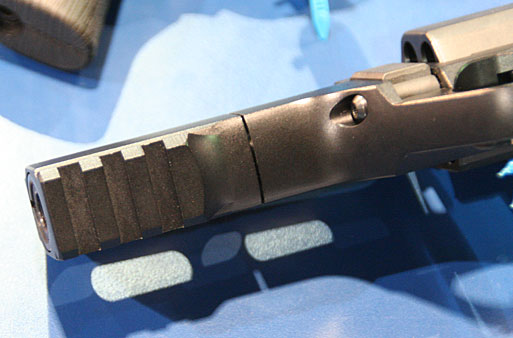 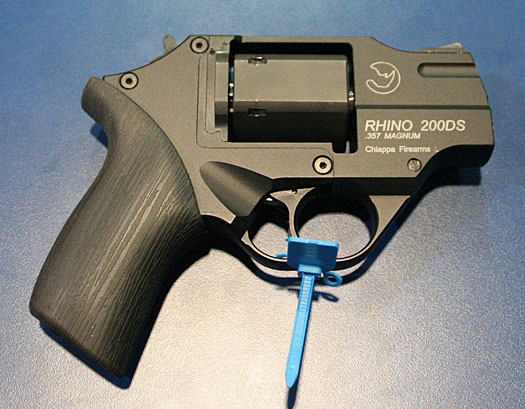 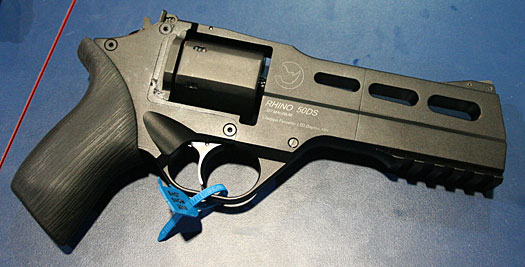 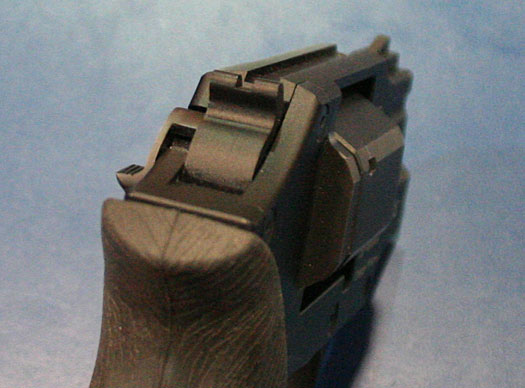 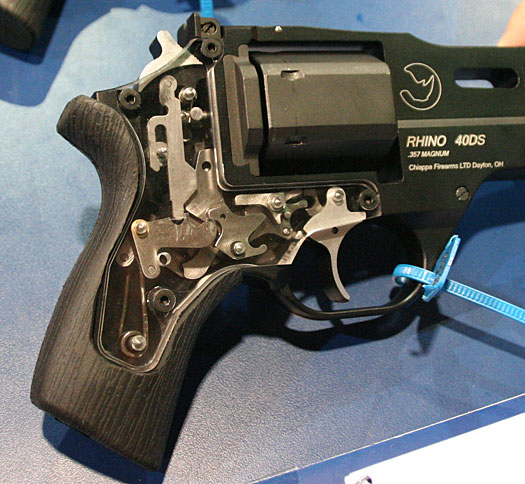 One of the most unusual revolvers on the market, the Chiappa Rhino, has taken another very non-traditional move by chambering the revolver in .40 S&W.

The .40-caliber version of the Rhino will be a six shooter, using full-moon clips to hold onto the rounds, since the cartridge is “rimless.”

While the .40 S&W version of the Rhino is interesting, it would have been far better to chamber the gun in 10mm.  The amazing recoil reduction achieved by the gun’s design would have been a great match with full power 10mm loads.  Additionally, the revolver could have also fired .40 S&W loads to give the shooter more flexibility.

In August 2011, Chiappa rolled out the above video showing a 9mm and .40 S&W Rhino at work on the range.

The Chiappa Rhino was in prominent display at the 2012 SHOT Show, including the new model chambered in .40 S&W.  Here are a few photos of what was on hand. 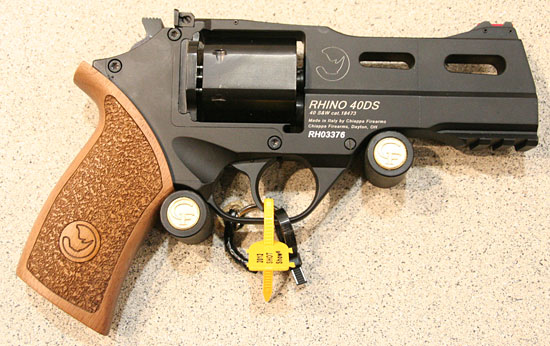 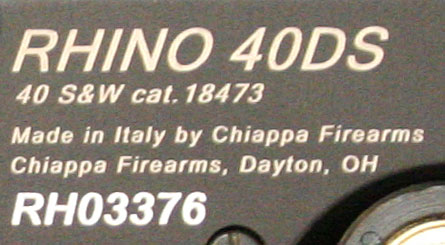 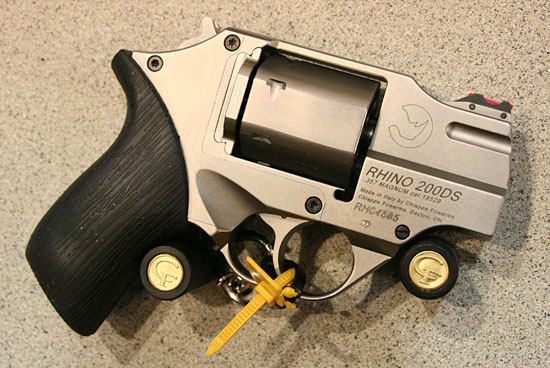 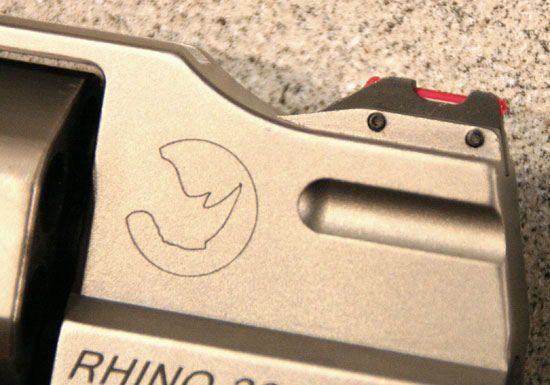 Something I thought was interesting was the pink grip sleeve on this Rhino revolver.  I was not able to obtain information from Chiappa if grip sleeves will be an option on their revolvers going forward. 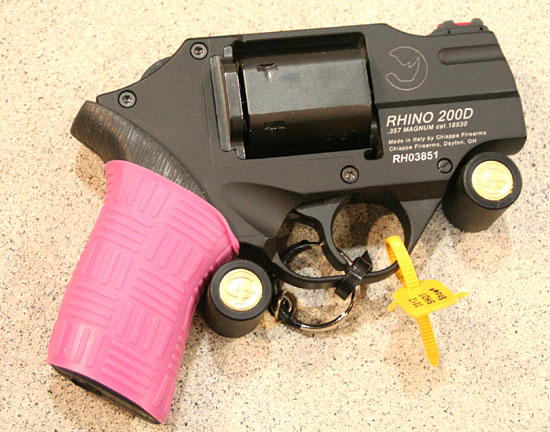 The Chiappa Rhino is now available in the 9×21 cartridge.  This brings the total number of cartridges the Rhino is chambered for to three: the .357 Magnum and .40 S&W being the other two.

A rimless cartridge, the 9×21 may seem like an odd chambering in this revolver. However, the 9×21 makes sense when you take a closer look.

Chiappa is an Italian company.  Certain countries, including Italy, ban the possession of 9mm Parabellum (9×19) by civilians.  The 9×21 was developed by IMI as a way around these arbitrary bans.  So, if Chiappa wants to sell the Rhino in a 9mm cartridge in certain countries, they have to chamber the revolver in 9×21.

Oddly, the Rhino is available for more rimless cartridges than for traditional revolver rounds.  While I like variety and odd-ball chamberings, I would really like to see a compact Rhino in .44 Special and/or .44 Magnum.

I had a chance to shoot one of these and I was pretty impressed. The recoil was very soft and the trigger wasn’t bad. It is just ugly as sin..

It’s not a good looker, but I’d like to get my hands on one none the less.

Bottom line…if you want a snub nose revolver that comfortably handles .357, this is pretty much the best choice. Long term reliability remains to be seen. For a full size revolver with a 4 or 6 inch barrel, I’d stick with a Smith or Ruger ( I love my GP100).

I shot a friends Rhino last weekend and I was impressed with how much it did not kick. I don’t know if I want one, but I can say they don’t kick much.