On the heels of its PDW announcement earlier in the year, Chiappa Firearms has another new gun based on the same design. Called the CBR-9 Black Rhino pistol, the new handgun will officially roll out at the 2020 SHOT Show in Las Vegas.

The new pistol uses a steel “upper” receiver that holds all of the mechanical components save the ejector and magazine. Those parts are housed in the polymer lower receiver that also forms the pistol grip.

Chiappa uses a blowback system in the Black Rhino. According to the company, the system is “improved and efficient” with a bolt that is about 50% of the weight of competing products.

Chambered in 9mm, the gun uses proprietary 18-round magazines. The company stated the magazine design is a patented design that prevents the deformation of the feed lips for improved reliability. In other words, don’t expect to slip a 33-round Glock magazine into place.

Good news, however. The company suggests larger magazine capacities may be available at a later date. This would seem to be an obvious play on its part.

One of the most interesting aspects of this new pistol is the collapsible arm brace. Similar to the shoulder stock on the PDW, the arm brace can make this gun extremely compact for transport and provide the additional bracing for someone to shoot the gun more accurately with one hand.

Low profile fiber optic sights are standard, while a top Picatinny rail allows for the addition of a red dot or some other optic. There are also side rails for lights and additional gear.

A few years back, Chiappa introduced the AK-9. That was an AK-style pistol that fed from Beretta 92 magazines. The CBR-9 pistol looks far more refined.

The original personal defense weapon that the Chiappa CBR-9 pistol is based on was unveiled at the 2019 IWA Outdoor Classics trade show in Nuremberg, Germany. To my eye, the CBR-9 Black Rhino pistol bears a passing resemblance to the HK MP7 PDW. I’m not suggesting the one is a copy or clone of the other – just that they have a resemblance. Here’s hoping the Chiappa is more affordable than the HK.

New for 2016, Chiappa Firearms will officially introduce the new CA612M shotguns at the SHOT Show. There will be two versions of the gun at launch: the Field and the Turkey.

The new shotguns share a number of features, but are customized to the needs of different hunters. Both guns are chambered for the 3.5″ 12 gauge shell and are semi-automatic. The semi-auto system is an inertia driven system that is designed to eliminate some of the problems associated with gas systems.

END_OF_DOCUMENT_TOKEN_TO_BE_REPLACED 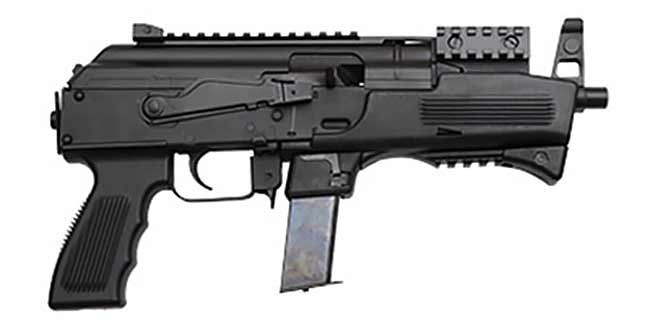 Chiappa equipped the pistol with a 6.3″ barrel. Overall, the gun is 14.25″ in length. Mechanical sights are included, though I suspect many people will prefer to add a red dot of some type using the built-in Picatinny rail. The rear sight is fixed, while the front is adjustable.

If you are not familiar with Chiappa, they produce a number of reproduction guns. Many people may be familiar with the Rhino revolvers the company introduced a few years ago. Although the Rhino is a nice shooting gun (even in .357 Magnum,) it is very much a niche gun that does not enjoy widespread popularity. Well, besides being one of the guns used in the remake of Total Recall.