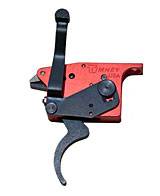 I love my Mosin Nagant rifles.  Like many M-N owners, I own several.  And at less than $100 for a fine shooting surplus rifle, most Mosin owners start small collections.

One of the common complaints from Mosin Nagant shooters is that the triggers on most of the rifles is somewhere between kinda awful and flat-out awful.  Considering  I only paid $70 each for my M-n rifles, the triggers aren’t bad, but they are heavy and gritty.  That’s about to change.

Timney Triggers introduced a trigger for the Mosin Nagant rifles.  Quoting consumer demand as the driving force behind this product’s development, Timney is selling the triggers right now on their web site for $89.95.

The trigger pulls are adjustable between 1 1/2 and 4 pounds, and a three pound pull ships standard.  Timney incorporated a trigger blocking side safety, heat treated components and an aluminum housing.

The cost of the Timney Trigger may be more than I paid for my surplus Mosins, but for a smooth, three pound trigger pull, I will easily part with my cash. 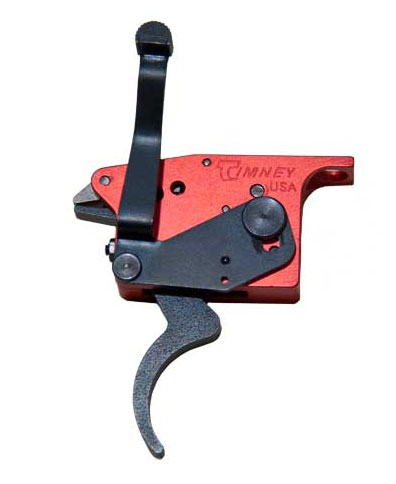 This trigger would probably work very well with the Archangel stock with the detachable magazine for the Mosin Nagant rifle.  With all of these things in place, you will probably have paid more than a good quality rifle at Walmart.  However, there is something to be said for getting your hands dirty and making a special rifle that YOU built up.  If you can take an old surplus rifle and make it into a 1-2″ shooter at 100 yards, there is a great deal of satisfaction in that.  It is somewhat similar to the guy who buys an older car and gets under the hood to make it something more than it was.  Sure, you might be able to get a “better” car for the same amount of money you will pour into it, but that is not the point.

If you do have a Mosin Nagant rifle (or a dozen), make sure you check out my review of the M-N book on these guns.  It is a great resource and has been updated since I did the review.

Nice! I’m building a scout rifle on an M44 and have the Huber Concepts trigger. It has a nice clean break. I may have to shell out for the Timney though since it is adjustable. Or maybe just buy another Mosin so I can use both.

Grab another Mosin (or five!) and compare the two triggers! I’ve got a M44 that I am thinking of doing into a scout rifle also. But, I’ve also thought about picking up another 91/30 to do a dedicated hunting rifle. Ah…decisions….

Found the Timney trigger on sale at E. Arthur Brown Company for $89.00. The website is http://www.eabco.com/store/products/Timney_Triggers_for_Mosin_Nagant_Rifles-2087-57.html

Thanks for taking the time to post the link.