After speaking to several members of Ruger’s management team, I feel comfortable in stating that Ruger will introduce a .40 S&W version of the SR9 pistol later this year.

The Ruger reps I spoke with stated the .40 S&W pistol (probably called SR40) was definitely something they have looked at, and they grinned knowingly and stated when asked about it “That’s a good idea!”

Ruger management said they were committed to only announcing those products they were ready to launch, and that they did bind themselves to artificial dates like the SHOT Show or the NRA Convention to make announcements.Â  Ruger staff said when they have something ready to ship, they will make the announcement then, not sit on it for the next big show.

Is Ruger set to announce the SR40 pistol? Â Yep. 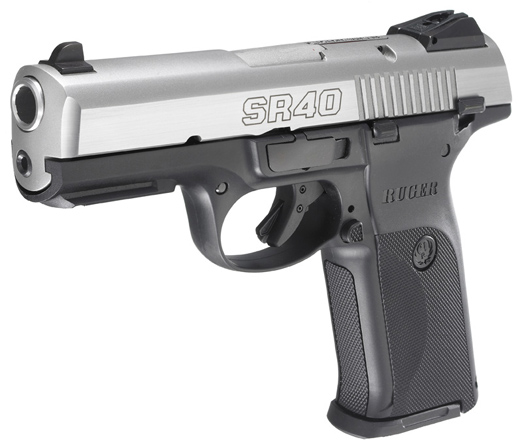 During the past several years, Ruger has become one of the more popular firearms manufacturers by introducing products consumers want and shipping them on time.Â  In fact, Ruger has a solid policy of only announcing a product they are ready to ship.Â  Keeping with that policy, Ruger would only announce a new .40-caliber pistol when they were ready to get them into the dealers’ showrooms.

Ever since the introduction of the SR9 almost two years ago, people have asked about a .40 S&W version.Â  The Internet hopeful have even named the pistol the “SR40”.

When I spoke to a Ruger V.P. at the 2010 SHOT Show, he stated that a .40 S&W chambered version of the SR9 would be a “good idea.”Â  What doesn’t translate very well into the printed word is the smile and knowing look that went with his statement.

On the May 23, 2010 broadcast of GunTalk, Tom Gresham hinted at new product coming from Ruger.Â  Could this be the new SR40?

That, or a 9mm version of the LCP…

I wouldn’t be surprised if Ruger waits until all the dust fron the Supreme Court’s decision on the 2nd Amendment settles, before introducing a new 40S&W version of their SR9: no 10-round limited magazine for this bad boy.