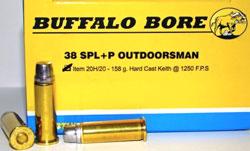 Buffalo Bore rolled out a new .38 Special load called the Outdoorsman. Â The Outdoorsman is a Keith-style, hard cast lead 158 grain semi-wadcutter bullet loaded to +P pressures. Â The load is designed for deep penetration and it should make for an adequate (not superior) round when carried for self defense in the back country.

When trekking in the wilderness, predator animals are a genuine concern. Â Penetration to vital areas is much more difficult to achieve with a handgun against a bear than it is against a human. Â Therefore, caliber and load choices are different in the woods than in the suburbs.

Carrying a .38 Special revolver is not ideal for the outdoors, but it may be the only tool you have to back up your hunting rifle or the only handgun you can carry while hiking. Â In these cases, the Buffalo Bore Outdoorsman is a good load choice.

The Keith-style hard cast bullets are more likely to achieve deep penetration that softer lead or hollowpoint bullets. Â Additionally, the velocities that Buffalo Bore is able to achieve with these loads also help to ensure the bullets get to the vital organs.

Buffalo Bore continues to offer the Outdoorsman ammo in .38 Special. Â The ammunition is still loaded to the same specs. Â Prices have gone up slightly to $28.79. Â Considering the crazy ammo prices in recent months, this small increase is not anything to get upset about.