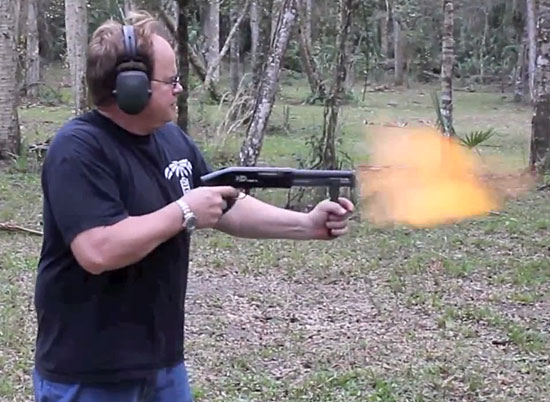 Safety Harbor Firearms is rolling out several new shotguns ahead of the 2012 SHOT Show. Â All three are short-barreled shotgunsfrom the company’s KEG line.

Two new models of KEG 12 (Kompact Entry Gun) shotguns seem to live up to the line’s name as they are outfitted with breacher-style muzzle brakes. Â Watching the video (below), it would appear the brakes do a respectable job of limiting recoil.

Rounding out the new firearms is the new KEG410, a short barrel shotgun chambered for the 410 shell.

Safety Harbor Firearms will be at the SHOT Show again this year, so I hope to be able to see these great new guns there.

Safety Harbor Firearms, aÂ Florida-based firearm manufacturer, updated their website recently, giving visitors a cleaner way to search the company’s guns and services. Â Make sure you go by and check it out.

Safety Harbor Firearms manufactures a variety of short barrel shotguns, .50 BMG rifles and uppers, plus a variety of other shooting accessories. Â I’ve always been intrigued by their KEG12 shotguns built on Remington and Mossberg actions. Â Who doesn’t want a 7″ barrel 12 gauge? Â (And you thought the Taurus Judge was the ultimate carjacking defense gun!)

But, I have to say, I am really liking the look of the magazine fed SHF rifles and SHTF uppers. Â These guns and uppers ride on an AR-15 type lower, have a five round box magazine and can be had with an 18″, 22″ or 29″ barrel.

I’ve shot a few .50 BMG guns, including a couple of uppers on an AR receiver, and they can be a lot of fun to shoot. Â I’ve never shot one with an 18″ barrel, though. Â That might redefine what “fun” is.

The magazine fed SHTF 50 upper starts at $1850, and additional options (like a fluted barrel) can increase the price.

If short barrel shotguns or long reaching .50’s are your thing, head over to Safety Harbor Firearms and check out their new site.

I like the 12, but why would you want a .410 as an entry gun? It’s no more powerful than a decent size handgun, holds fewer rounds, is slower to reload, and is larger. The only use I could see for it is as a survival type weapon for pilots, and maybe put a folding stock on it, but I would actually rather have a .22lr for that.