Yeah, I said AR-Muzzleloader! We here at Gunsholstersandgear.com try to bring you the latest and greatest in firearms and related accessories – especially during SHOT SHOW. So here it is. Being from Missouri I had to check out CMMG – especially since I heard they had some new rifles in the ever-increasingly-popular .300 Blackout cartridge (see my article on the Revolution and .300 Blackout rifles).

While there I talked with Larry Wayland at the CMMG booth about a very interesting development. Apparently the engineers at CMMG challenged each other to come up with the most outlandish ideas for an AR-platform. The result is a .50 cal. muzzleloader on the CMMG AR-platform. Yes, itâ€™s crazy! And get this … theyâ€™ve been sitting on the patent for this thing for a couple of years now!

Yeah, donâ€™t try finding this baby in the CMMG catalogue, and quite frankly Iâ€™m not sure if or when itâ€™s going to production. Larry told me that the CMMG guys havenâ€™t even named this beast yet, but I have to admit that my curiosity was peaked.

I have just recently entered the muzzleloading shooting and hunting field, and I will readily admit that my knowledge is somewhere just above novice. However, I have noticed that the AR-platform has become one of the most versatile rifle platforms for anything from Airsoft to .22 caliber to … well, .50 caliber. 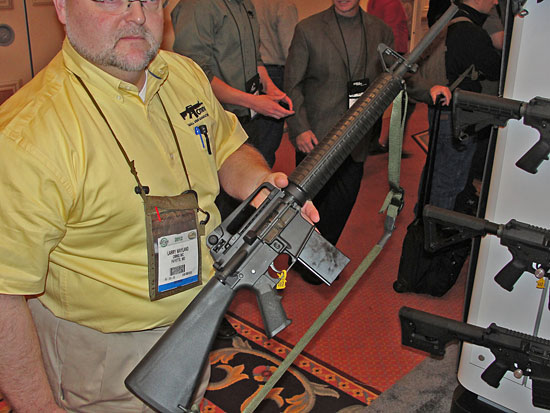 The CMMG creation is an in-line muzzleloader, that utilizes a 209 shotgun primer for firing. Pretty common primer in the muzzle-loading world, except for the fact that this primer is housed in a special .223 casing.
The .50 caliber bullet is loaded through the muzzle along with the desired amount of black powder, usually in pre-packaged powder pellets, just like other muzzle loaders. The ramrod is ingeniously carried in a special sleeve inside the sling.

Perhaps one of the greatest leaps in creativity is the magazine storage compartment. This muzzleloader has a â€œmagazineâ€ that fits into the magazine well just like other AR-platforms. However, the magazine does not feed cartridges into the chamber – this still has to be done by hand, one at a time. The magazine does hold four .223 conversion cartridges (with 209 shotgun primers), four .50 caliber bullets, and two black powder pellets per shot (or 8 total). Each compartment is neatly laid out to hold the particular components of a complete shot. 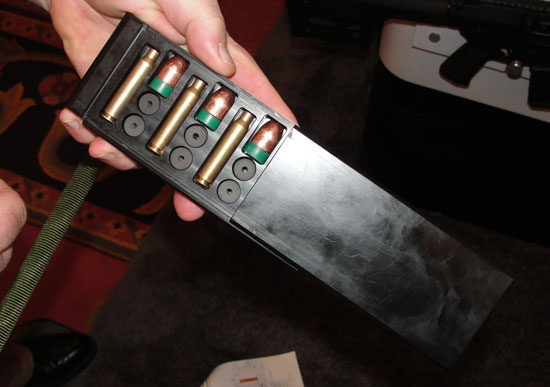 To access the stored firing components, the shooter simply slides the outside of the mock magazine cover down to reveal the necessary shot components. Fairly simple, and convenient. I imagine a trained muzzleloader could lay this AR- muzzleloader on its side (ejection port up), and be able to reload without moving much at all.

The firing process is fairly simple as well. Load the powder pellets and then bullet into the barrel from the muzzle and ram rod to properly seat. Lock the bolt back and manually insert the modified .223 cartridge into the chamber. Release the bolt, and youâ€™re ready to fire – using the sights of your choice (this version has the standard A2 sights on it). Once fired the casing should eject, but youâ€™ll have to lock the bolt back again to reload another .223 cartridge.

There may not be a market for this type of rifle, but I sure do appreciate the creativity of the CMMG engineers and thinkers. Having a muzzleloader in an AR- platform does provide modularity that most traditional muzzleloaders donâ€™t possess. Even with the usual shorter ranges of a muzzleloader, Iâ€™m sure there are plenty of hunters that would love to add a few accessories to make the hunt more enjoyable. 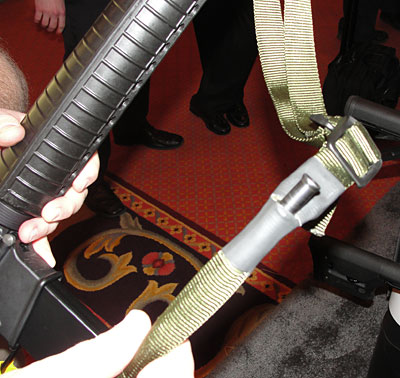 As far as how the firing process works … Iâ€™m not sure. I suppose that the bolt stays closed long enough to provide the time for the pellets to ignite and produce enough pressure to send the bullet downrange before opening and ejecting the spent casing. Iâ€™m guessing, however, as I was trying to believe my eyes at the CMMG booth and not paying too much attention to questions on details.

Iâ€™m sure the muzzleloading crowd will have more questions, but my head is still spinning from what I saw. Hopefully the pictures will help a little. You and I will just have to wait and see if CMMG brings this innovation to the market. Larry stated that it would be â€œlater this yearâ€ if that happened, and no, there isnâ€™t an MSRP yet.

Nice writeup! Thank you. I’m guessing that there’s no gas system so that the bolt stays locked into the star chamber until it’s manually extracted by operating the charging handle.

Finish this sentence for me, Please! “Dianne Feinstein will ….. !”

Iike the idea and the look of this rifle. I am looking for a black powder rifle and I am wondering when, if ever you will offer your rifle for sale.