There are many names in quality sniper rifles, and CZ now appears ready to add their name to the contenders. CZ was showing off their CZ 550 Urban Counter Sniper rifle at the 2012 SHOT Show. The rifle design showed a lot of promise, and the materials addressed many needs of tactical operators. If the CZ 550 is made with the same care and craftsmanship of the famous CZ-75 or the new CZ P-07 Duty pistols, this rifle should begin making a name for itself in short order.

This area of firearms is not one to be entered lightly, as the competition is fierce. There are heavy hitters in the form of Remington, Savage, Accuracy International, H-S Precision, and G&A Precision. In the European market, and a lessor influence in America, there is Steyr. The Remington 700 is perhaps the cornerstone of all American sniper rifles dating back to the 1960â€™s, and still holds a commanding influence and market share.

Chambered in .308 Winchester, perhaps the most widely used police sniper caliber in America, the CZ 550 looks to offer a few features to set it apart from some of the big names in this arena. At first glance the viewer immediately recognizes that this rifle is designed for compact carry and maneuvers. There seems to be a definite acknowledgment of Col. Jeff Cooperâ€™s ideas and requirements for a scout rifle. This rifle is compact, . 30 caliber, and has a 10-round detachable magazine. The rifle comes with a olive green coated barrel, and a black stock with green paint looking splashes. 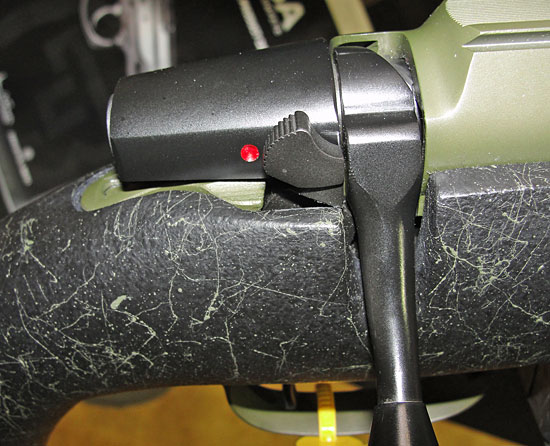 An interesting design is the bolt design. Most rifle bolts are smooth sided with the extractor located on the inside of the bolt face. The CZ 550 has a long metal attachment that actually runs on the outside of the bolt. At the tip of the attachment is the extractor that curls around the bolt face. I havenâ€™t been able to find anything on this particular bolt design, or its unique features and function. 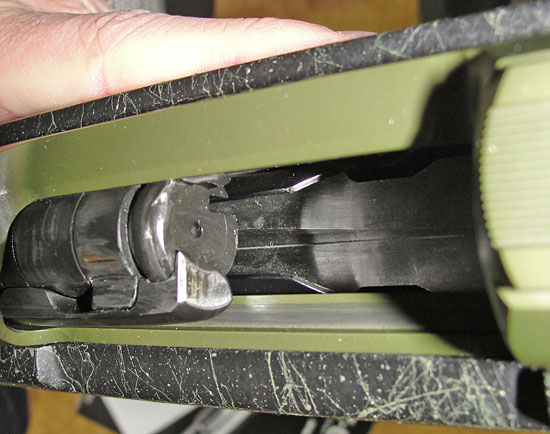 When the magazine runs dry, the sniper can begin combat loading (one round at a time), but has the option to make a quick reload with another 10-round magazine. This significantly reduces reload times and follow-up shots. 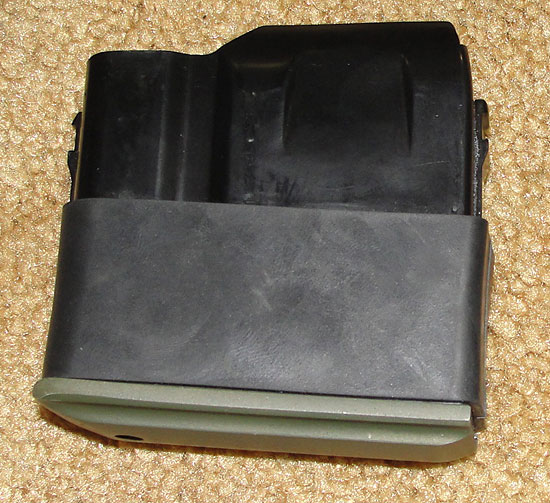 The Surefire muzzle break is another great addition. Many sniper rifles are finished at the barrel muzzle with a simple crowning. With the Surefire muzzle break the CZ 550 not only has suppressor adaptability, but has the ability to redirect expelled gases to help reduce muzzle rise during firing. In combination with a heavy bull barrel, and a decent overall weight, this should provide very nice recoil results for the shorter barreled CZ 550. 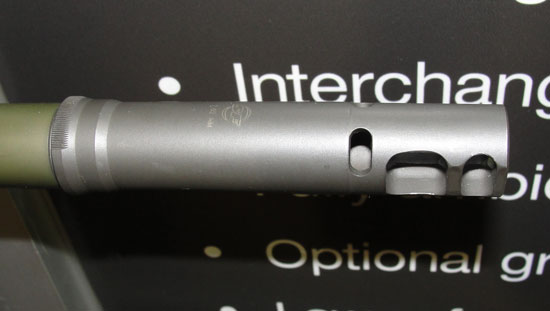 The CZ 550 has standard sniper rifle sling attachments. One is located towards the back of the stock, and there are two under the front of the stock for personal preference in set up.

The CZ 550 comes with a receiver that is designed to accept Picatinny rail style scope mounts. Some prefer mounts that are directly screwed into the receiver, but the Picatinny style mounts allow for easier mounting. There are many options for this style of scope mount, from Leupold, Burris, Millet and others.

One thing that I found very surprising was the fact that the CZ 550 does not come with a bipod or bipod mounts. The sling mounts on the base of the stock do not appear ready or capable of mounting a respectable bipod, like a fairly standard Harris bipod. Being an â€œurban counter sniperâ€ rifle, the CZ 550 should, in my opinion, have bipod capability. A departure from Col. Cooperâ€™s â€œscoutâ€ rifle, but in modern sniper rifle requirements, a must. 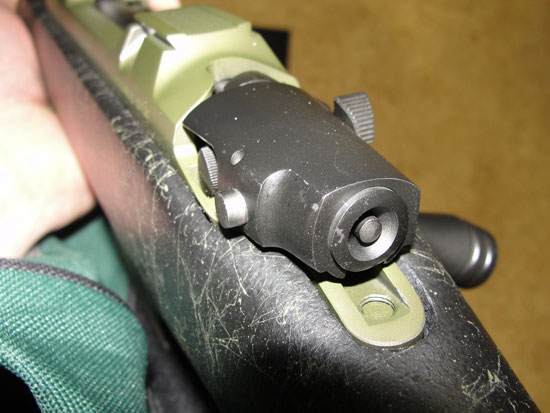 Not that bipod shooting is the best, or even the most widely used method of snipers, but the option should be readily available. Personally I find that I can make quicker follow-up shots shooting from a well placed carry bag, but having the bipod ready is a good option.

There are many other comparison rifles, but the ones Iâ€™ve listed are very common throughout America, and should give you a good framework of comparison. Many of the H-S Precision, Accuracy International, and G&S Precision rifles start in the range of $2500 and go up quickly. Donâ€™t expect to find a Steyr for less than $5000. 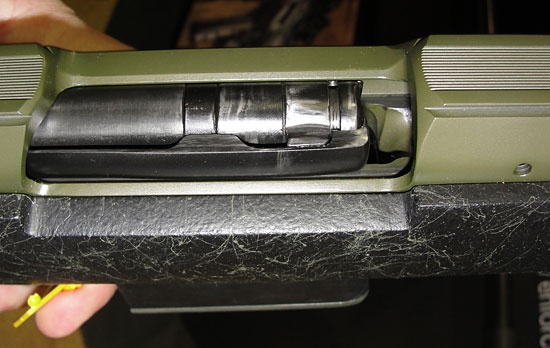 The CZ 550 features lend it to being very mobile regardless of the terrain. Adding heavy barrels for accuracy, and firepower through detachable magazines, there is a lot of potential here. I have not fired the CZ 550, nor have I read any reviews on its accuracy. Ultimately that characteristic alone will determine CZâ€™s stature in the field of sniper rifles. You can build a beautiful rifle, but if it canâ€™t maintain tight groups of follow- up shots the rifle will end up sitting on the shelf.

The MSRP of $2398 is noticeably more than several of the competitors, but I think CZ is proud of what theyâ€™ve produced and banking on it performing to the most stringent of requirements.

As an â€œurban counter sniperâ€ rifle the CZ 550 had better perform well. I know that snipers will not accept a rifle that cannot consistently perform, and in the tactical sniper world that means placing shots in the smallest of openings. When a hostageâ€™s life is on the line, there really is no room for error, and there is no room for a rifle that cannot succeed in those demanding situations. Weâ€™ll see if the CZ 550 is up to the task, but so far it seems that it is ready to go the distance.

$2398, OUCH, when compared to the Remmington, but looks good compared to the AI. As its targets, for sales as wells as bullet targets, will be in Europe its competion will be AI, Sig and FN, so maybe the price is reasonable.
Plus for the detachable magazine, but suprised it does not have rails these days. All rifles need rails nowadays, if anything just to look tacticool
Michael

You may be very right about the primary target audience being in Europe, but this was shown at SHOT with clear indications that CZ is eyeing the American market as well.

The price is a bit high, however, most police sniper rifles aren’t simply “out of the box” manufacturer rifles either. Many have been upgraded with heavier barrels, custom stocks, and sometimes advanced triggers. All that can easily bring the start price up $1000-2000.

The CZ 550 receiver does have a Picatinny-type rail on the top, however without slots for the tension bar it may not work with standard Picatinny mounts. It is manufactured that way so it is permanent and not modular. I would have liked the ability for rails on the fore end of the stock, to allow easy mounting of a bipod or perhaps a light.

Thanks for commenting Michael.

I purchased one in May 2012 and love it. It shoots as advertised sub MOA groups all day long. It was hard to track down though, I spent months locating one and then it was sent with one four rnd mag. I ordered another 4 rnd mag and two ten rnd magazines from CZ in Kansas City. $119.00 each for the tens, $59.00 for the 4 rnd. and I had to return the tens for an exchange. When the first rnd was loaded in the mag it was so loose it would just about slide out of the mag on its own and would cause a miss feed. It was as if there was not enough spring pressure exerting upward or the mag lips were not canted in enough. Other than the problem with the magazines the rifle is a smooth operating tight grouping sweet rifle. I can hardly wait for deer season to test it out. I topped it with a Trijicon 5-20 X 50 Accupoint, it’s a very handsome set up.

Iâ€™m quite late to this party but Iâ€™ve had mine for about 6 years now. Like stated above, the rifle shoots sub-Moa all day long. I even did 3 10rnd strings back to back, with no breaks, and the rifle was still able to ring an 8inch gong @ 300 yards. Doesnâ€™t sound impressive at first but these shots were fired consecutively, as quickly as I could work the extractor and all 30 rounds were lake city bulk ammo. This is my absolute favorite rifle. My trg and carbonlight I still enjoy but the UCS I can actually run drills with and it is an absolute blast to work it into my training.