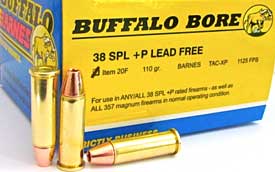 is loading .38 Special ammo specifically for short-barreled guns.  The load uses a Barnes 110 grain TAC-XP bullet, which is an all-copper bullet.  The ammo uses brass cases and a low-flash powder.

Until recently, snubnose revolver shooters made do with standard ammunition and the knowledge that the ammo would not be as effective as if it was shot out of a longer barrel handgun.  The amount of velocity loss varied with the load and the firearm, but generally, it has been understood that short-barreled guns are less potent than longer ones.

There are probably others out there, but the 135 grain Speer Gold Dot load for the .38 Special was the first short-barrel load to really get traction with the public.  The load uses a medium-to-heavy weight bullet for the cartridge (most bullet weights run 110 grain, 125 grain or 158 grain in .38 Special) and a special powder to maximize velocity out of short-barreled guns.  From what I hear the load has been effective “on the street.”

The load was developed by Speer for the New York City Police Department, and it has been adopted by many other law enforcement agencies as the back-up gun ammo of choice. The “halo effect” of police agency use often drives sales in the commercial market, and I suspect that is one of the reasons the Speer load has been popular.

By way of comparison, Ballistics by the Inch tested the Speer load and obtained 897 fps from a Smith & Wesson 642 (1.875″ barrel) and 928 fps from a Colt Detective Special (3″) barrel.  Keep in mind that the Buffalo Bore tests and BBTI tests cannot be directly compared, as they were not controlled environments, etc.Â  But for the sake of discussion, they are interesting.

The Buffalo Bore load is +P rated, and the company states the bullets are crimped, so shooting out of the ultra-lightweight revolvers should not be a problem.  Buffalo Bore also noted very tight groups with the load (check out their website for more information.)

Excellent! I wonder how it affects shooting out of a .357? I have a Ruger SP101 and I think I will find a box and test it out. Thanks for the info!