Russian arms manufacturer JSC Izhmash is gearing up to produce the Saiga-9 carbine, a civilian version of the Vityaz-SN submachine gun.  The new Saiga-9 will be chambered in 9mm (aka 9×19).

The new carbine was introduced at the 2012 Russian Hunting and Sporting Goods show in September.  Currently, I don’t have much information on the Saiga-9, other than it is the “civil equivalent” of the SMG.

Below is a video of the Vityaz-SN in action.  Expect that the Saiga-9 will look similar (with a longer barrel no doubt), but will lack the automatic fire.

The Vityaz-SN uses 30-round magazines, which I expect would carry over to the new Saiga-9 carbine.   I would also expect the standard iron sights, Picatinny rail on the receiver cover and the folding stock to carry over.

The only question is would Izhmash make a pistol version of this gun, dropping the stock and keeping the short barrel?  That might be a Saiga-9 that would be extremely popular.  But then again, I expect a carbine version to be very popular in the US as well.  (Assuming it is imported.)

The new Saiga-9 carbine is a civilian version of the Vityaz-SN submachine gun, and was first reported by GunsHolstersAndGear.com.  Since then, we’ve developed additional information on the new carbine.

The Saiga-9 will be chambered for the 9×19 (aka 9mm Parabellum and 9mm Luger) cartridge.  Standard magazine capacity is only 10 rounds, but I expect that aftermarket, high-capacity magazines would be available.  I presume the abnormally low round count mags is an intentional plan to assist with export/import regulations.  There will be a magazine coupler available for faster reloads.

There is a Picatinny rail on the receiver cover for mounting a range of optics.  Additional Picatinny rails will be on the fore arm for the addition of white lights, lasers and grips.

The buttstock folds to the left side of the receiver for transport and concealment.

Ishmash states that the rifle will be available in two models: one for the domestic (Russian) market and one for export.  The export version will have a “short barrel” and be chambered in 9×19.  No additional information was provided on the domestic model.

It is not known if “short barrel” means a 16″ carbine (probably) or something shorter.  I’m not an expert on the NFA, but I would believe that a true SBR would be difficult to import for sale to the civilian market.  So, until I see otherwise, I’ll assume the gun will have a 16″ barrel.

Ishmash expects the MSRP to be around $950.  That sounds pretty steep, but it is a strong indicator of how far the US dollar has fallen.

Note that this Saiga-9 carbine is not the same as the original Saiga-9 carbine that was chambered in 9x53R and designed for hunting.  That rifle was substantially different and bigger.  Needless to say the 9x53R and 9×19 cartridges are not interchangeable. I suspect that my readers will already know that…

I expect to see the Saiga-9 carbines at the 2013 SHOT Show coming up in January.  If they are there, we will have video and photos of them, along with all of the specs.

We’re getting out first photos of the new Saiga-9 carbine from Izhmash.  This photo was taken at the company’s demo booth at the Arms and Hunting Expo held in Moscow last month. 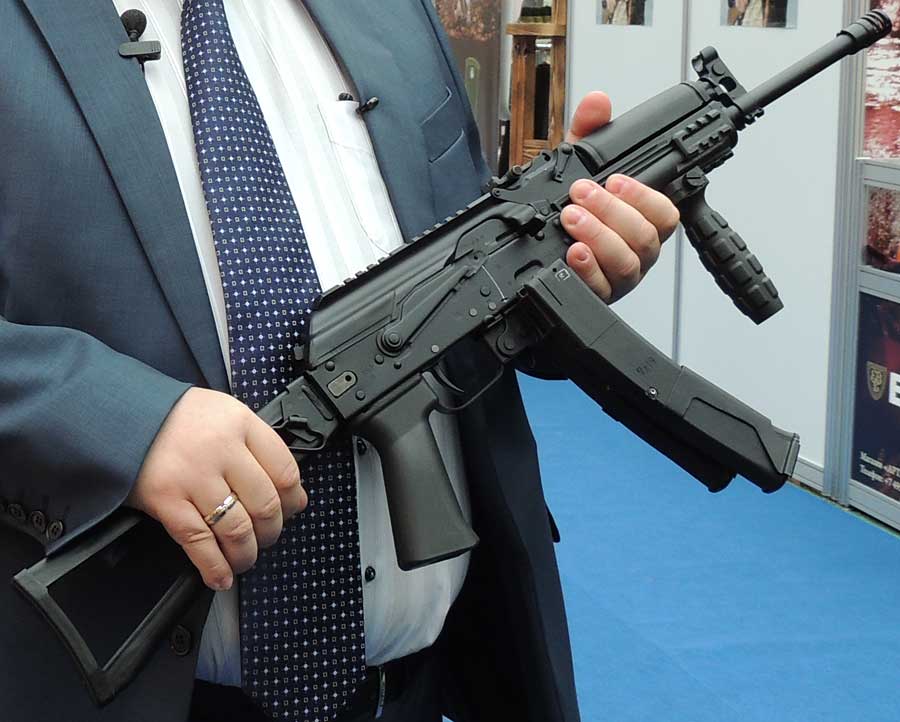 As you can see in the photo, the Saiga-9 retains many of the styling cues from the Vityaz-SN, on which the new carbine is based.  The folding rear stock retains the triangle shape and the pistol grip appears to be the same.  Like the military weapon, the Saiga-9 has a Picatinny rail on top of the receiver cover, allowing for the addition of optics.

Unlike the original Vityaz-SN, however, the Saiga-9 has three short rails on the fore end so you can easily add a vertical grip (as shown) or a white light, laser targeting designator or other Acme-certified Mall Ninja™ gear.  The barrel is also significantly longer, though the muzzle device appears to be the same.  If this gun is to be imported into the US, the company will have to make the barrel length a minimum of 16″ (not including any removable muzzle devices.) 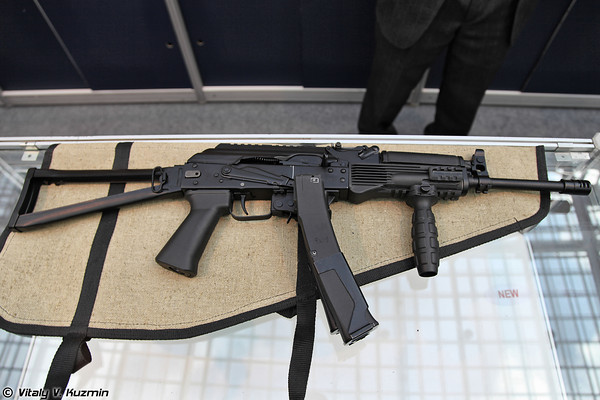 PredatorBDU wrote about the new Molot Vepr-9 carbine that is a likely competitor to the Saiga-9.  The civilian Vepr-9 has a similar configuration to the Saiga-9, but has some significant differences.  Among them is the use of a Magpul stock and an ambidextrous, reciprocating charging handle.  Definitely go over to the PredatorBDU site and check out the details.

The above measurements are conversions from metric to english, so slight variations due to minor rounding can be expected.  Also, the MSRP is converted from rubles to US dollars.  This exchange rate is in constant flux, so this number is very fluid.  As inflation continues to grow in the US, the MSRP can be expected to increase.

Oh Yeah! Keep em’ coming. The N.R.A. is fighting with a vengeance to uphold our second ammendment right, amongst others. If you haven’t already, join, acquire home protection that suits your family; and practice, practice, practice. Safety first!!!!!!