The Atomic Ammunition “regular” .357 Magnum pushes a 158 grain bonded hollowpoint to 1350 fps from a 4″ barrel. Â Similar loads from the larger ammo companies run at about 1200-1250 fps for a 158 grain bullet from an unknown length barrel. Â All of Atomic Ammunition’s loads fall within SAAMI specs, but I bet there isn’t much room for error.

The Coonan Silver Bullets are sold in blister packs of eight cartridges that are stored in a hardwood ash anti-vampire stake, which makes this kit a triple threat to the undead: Â werewolves, bloodsuckers and the humble zombie. 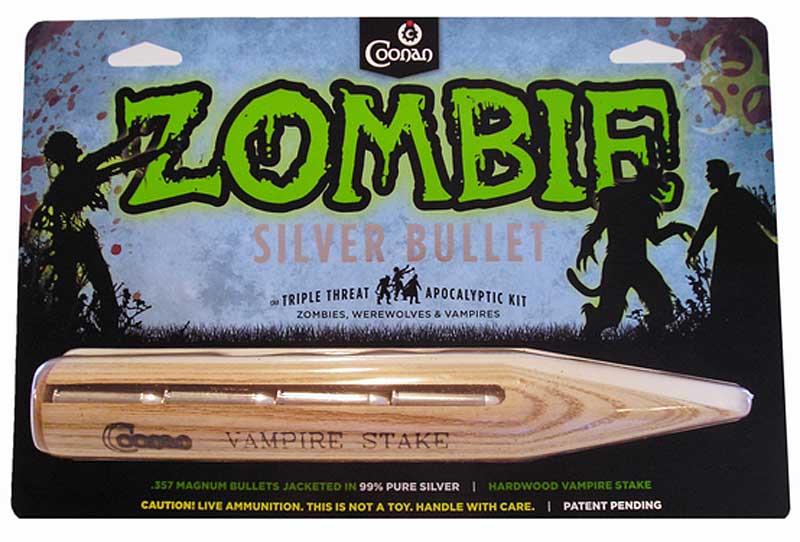 The whole zombie meme has been overplayed with green rifle stocks, knives and grips from virtually every manufacturer in the firearms industry. Â This, however, has style.

Developing the silver (real, freakin’ silver) jackets and vampire stakes took some effort and had to cost a fair bit of money. This is not a low-end product for the airsoft mall ninja. Â This is a cool bit of kit for folks with a few more dollars in their pocket. Â Coonan develops quality products, not cheap ones. 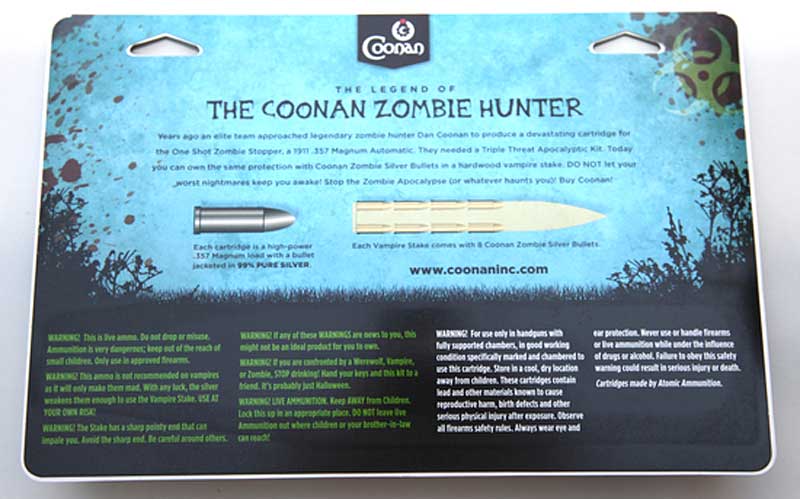 The package warnings are a riot, by the way. Â Understandably, there is a warning that these cartridges are live ammo, not toys. Â But from there, the warning gets much moreÂ interesting. Â My favorite? 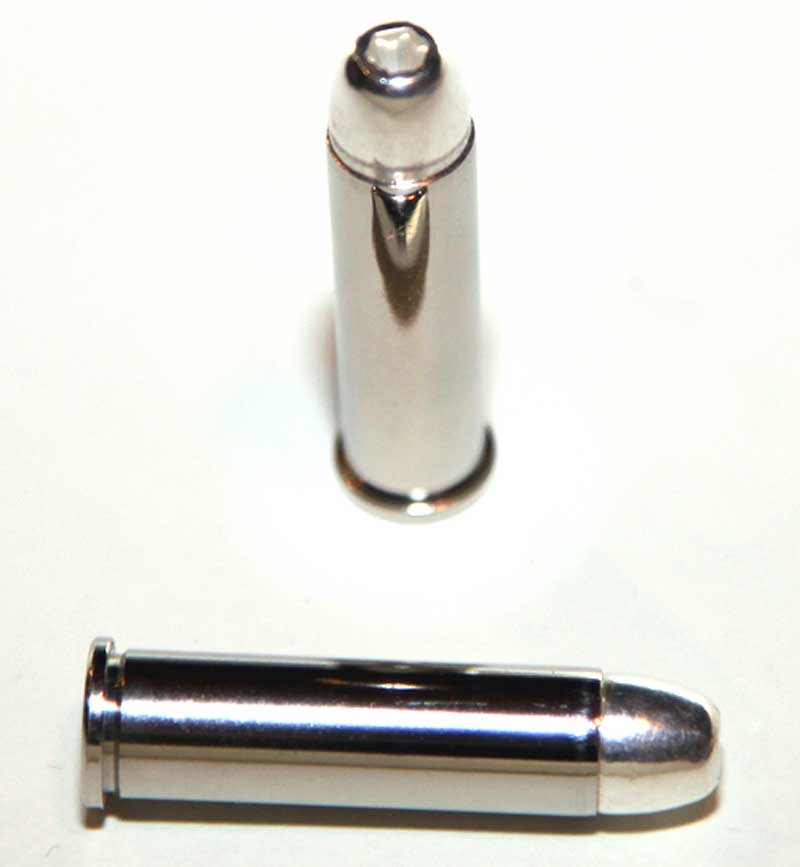 If you are thinking that someone else already makes a silver bullet, you are probably thinking about a Winchester bullet called the Silvertip, which uses a silver-colored jacket. Â Though silver-colored, it does not contain silver, which could be a fatal mistake should you rely on it for undead hunting. Â The Silvertip has been around for more than 30 years and is used in 17 different Winchester loads. Â The Coonan Silver Bullets are only available in .357 Magnum.

Eight rounds of Coonan Silver Bullets plus the ash vampire stake will cost you $49.95. Â Sure, it ain’t cheap. Â But, since silver is well north of $30/ounce nowadays, they simply cannot be made cheaply. Â Nope, there is not an ounce of silver in the package, but I imagine Coonan and Atomic likely went through a pound or two in the load development.

Below is a video of the Coonan .357 Magnum 1911 firing the Silver Bullets at a recent shooting event (SHTF-2). Â Check out the ring of fire…

It looks like Coonan has renamed and relaunched the Silver Bullets product I told you about in October. Â The package is now marketed as the Triple Threat Apocalyptic Kit, referring to the ability to take on vampires, zombies and werewolves.

You see, the package contains a pre-sharpened stake for the bloodsuckers and 99% pure silver jacket bullets for the lycanthropes. Â Either of the above can be used on zombies. Â Of course, so can a camp shovel, guitar, baseball bat, flamethrower and garden shears. 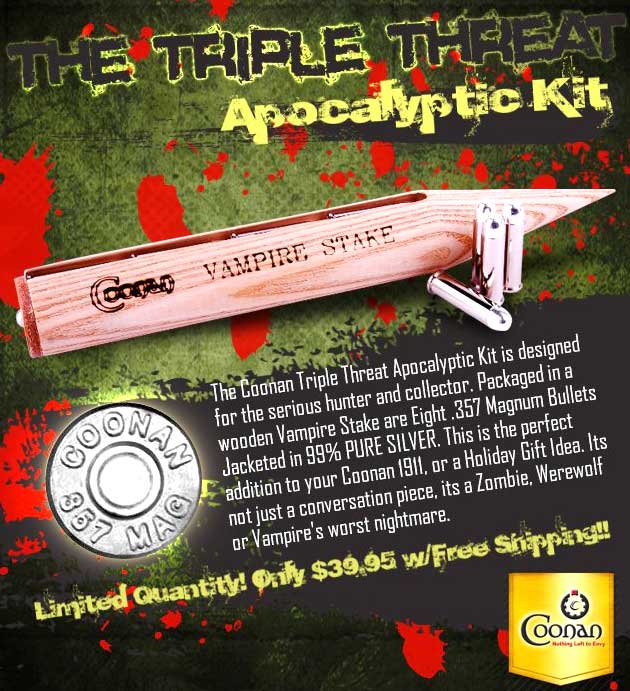 Do you have .45 long colt silver bullets?

We are a news & reviews site and do not sell anything. However, I checked with Coonan earlier in the year and they have discontinued these sets.

If anyone knows of a craftsman making silver bullets or ammunition with silver bullets, would you mind posting the information for Randy and other readers who might be interested?

Thanks Salvatore! They are not cheap ($65 for a one round box) but use 0.999 silver in the hand turned bullet.

Would like to purchase 100 rounds of silver tipped.40 and 9mm. Can be JHP or fmj… got a dogman running around these woods.

Jeff where are you located. I’m interested. Only one or do you have a pack of them?