Days before the NASGW Expo, news is starting to move at a much faster pace including announcements of new guns, shooting gear and even corporate acquisitions. Â Here are a few of the things that are leaking out ahead of this week’s show.

The Remington Arms Company picked up gun accessory maker TAPCO, expanding the company’s reach throughout the shooting market. Â TAPCO manufactures a wide range of firearm parts, mainly for rifles. Â I know a lot of people that have relied on their replacement AK and SKS parts to ensure 922r compliance.

TAPCO is based in the gun-friendly town of Kennesaw, GA. Â Back when I was a police officer with Kennesaw PD, I had a number of opportunities to interact with the TAPCO staff and always found them a professional bunch. Â Although they do all of their own manufacturing now, I seem to recall picking up some surplus stuff from them in the late ’90s. Â In fact, I believe I’ve got a whole slew of SKS stripper clips I picked up from them. Â But then again, my memory might be failing me.

Eagle Imports, the US-based importer of Metro Arms, will be showing a new line of 1911 pistols at the 2012 NASGW Expo this week. Â The new guns are said to have match-grade barrels, upgraded sights, ambidextrous controls and more. A total of five new models will be introduced including a double-stack 1911.

G&G Tools has designed and is now testing a new carrier cleaner for the AR15-type rifles. Â The new tool works without solvents by scraping away the carbon and finishing with a light polishing from a scrubbing pad. Â G&G Tools currently makes specialized tools for cleaning a AR15 and AR10 bolts.

CZ-USA will be showing the 527 Varmint and 527 American rifles chambered in .17 Hornet at the 2013 SHOT Show. Â The Varmint is a heavy barrel rifle, while the American is considered a sporter weight gun.

I believe the .17 Hornet cartridge is only loaded by one manufacturer: Hornady. Â The Hornady load uses a 20 grain V-Max bullet that is screaming along at 3650 fps at the barrel. Â It is a centerfire cartridge, not a rimfire like the .17 HMR 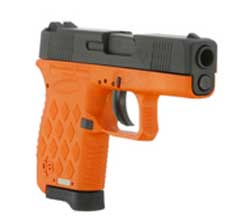 The popular single-stack 9mm pistol from Diamondback, the DB9, appears to be available in a variety of colors now. Â The company’s website shows options for pink, orange and teal frames to go with the basic black. Â Teal and pink frames can be had with nickel slides in addition to black.

I’m afraid the orange frame is only available with a black slide. Â Maybe it is a special Halloween edition?