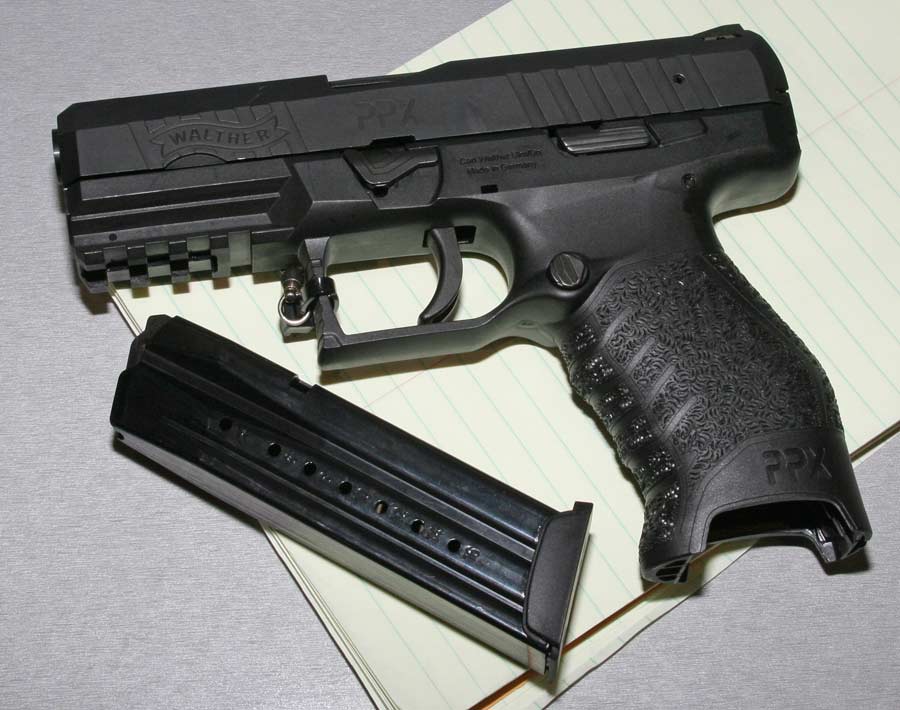 The new Walther PPX was on display at the NASGW Expo, and regular readers of this site have probably already seen some of the photos of the pistol. Â Here are some more details on the gun and some of my observations.

The new PPX will be available in 9mm and .40 S&W. Â The 9mm version will hold 16 rounds in the magazine. Â Alternatively, the .40 S&W will pack 14 rounds into the mag. Â Either way, you should have an adequate amount of felon repellant should it be needed. 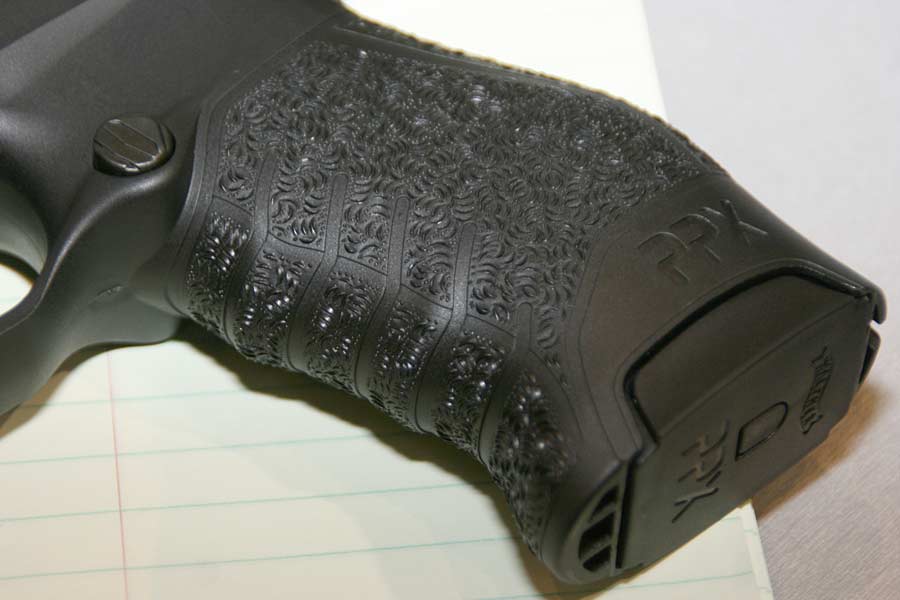 When swapping magazines, the shooter will use a conventional push-button style magazine release, not the lever/paddle type found on some other models of Walther pistols. Â The mag release button isÂ reversibleÂ for left-handed shooters.

Walther reps called the trigger pull on the PPX a “constant action” system. Â As I understand it, it is not a true double action pull, but rather a “prepped” pull with a relatively short, and perceptible reset. Â The system is hammer fired, not striker fired. Â A recessed and bobbed hammer can be seen at the rear of the slide. 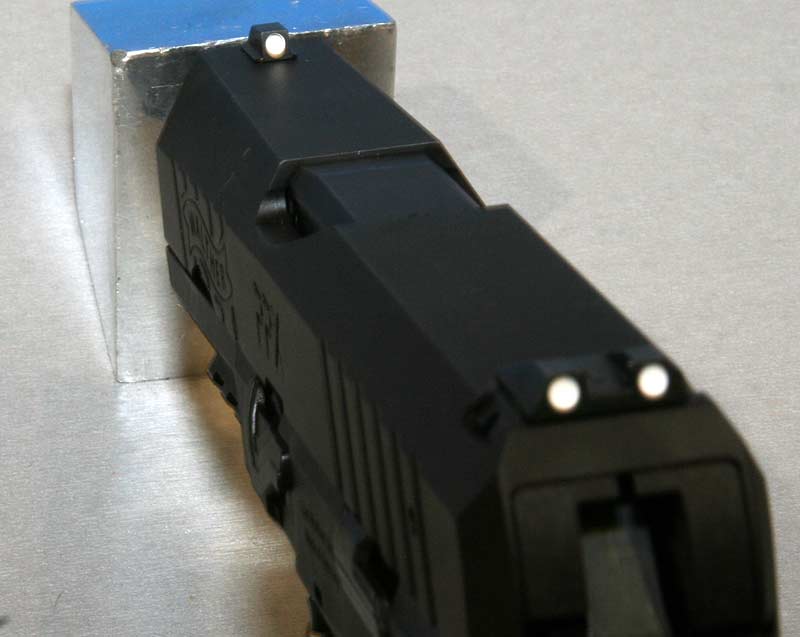 The sights on the PPX were standard three-dot. Â At this time, there are no night-sights available or planned for the gun. 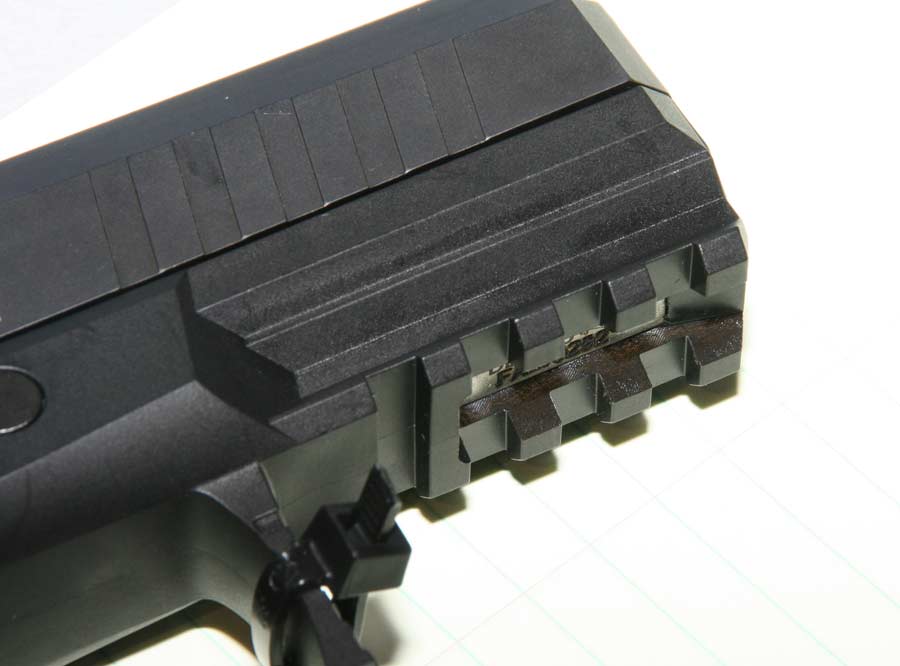 The Walther PPX has a Picatinny-style accessory rail forward of the trigger guard.

The overall shape seemed a bit blocky, and vaguely resembled a Hi Point pistol. Â I suppose the PPX is much more closely designed like the Walther PPQ, but I do not find the gun to be sleek or attractive. Â Of course, beauty is in the eye of the beholder and you are welcome to disagree. Â Certainly, the PPX’s grip and control placement follows the PPQ design mold.

Two versions of the gun will be made: Â all black and one duo-tone. Â The duo-tone will have a black frame and a stainless slide. Â Both versions can be had in either caliber. Â MSRP for the all black is $499 and $549 for the duo-tone. 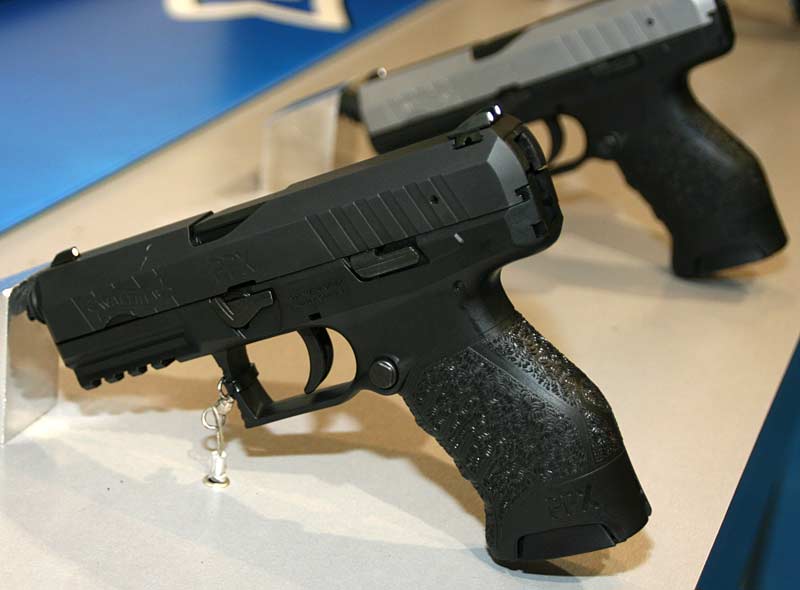 The Walther rep advised an additional version of the PPX would be released. Â This version would come with an extended and threaded barrel for the easy installation of a sound suppressor. Â Side note:Â  How popular are suppressors becoming for Walther to make a threaded barrel option for each of their new guns?

The sales staff at Walther were helpful, but busy with buyers. Â As the NASGW Expo is primarily designed to bring manufacturers and distributors together, they did not have any media materials on hand. Â My time was limited with the pistol, so I was not able to break it down and give you greater insight to the gun. Â However, it will be at the 2013 SHOT Show, and so will we. 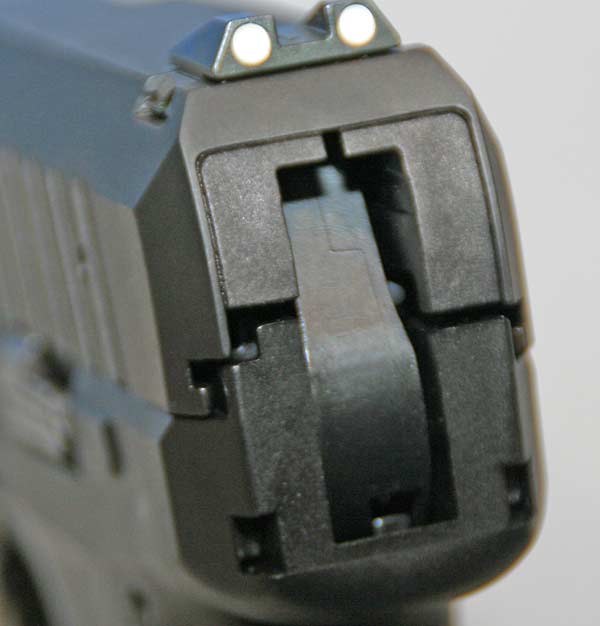 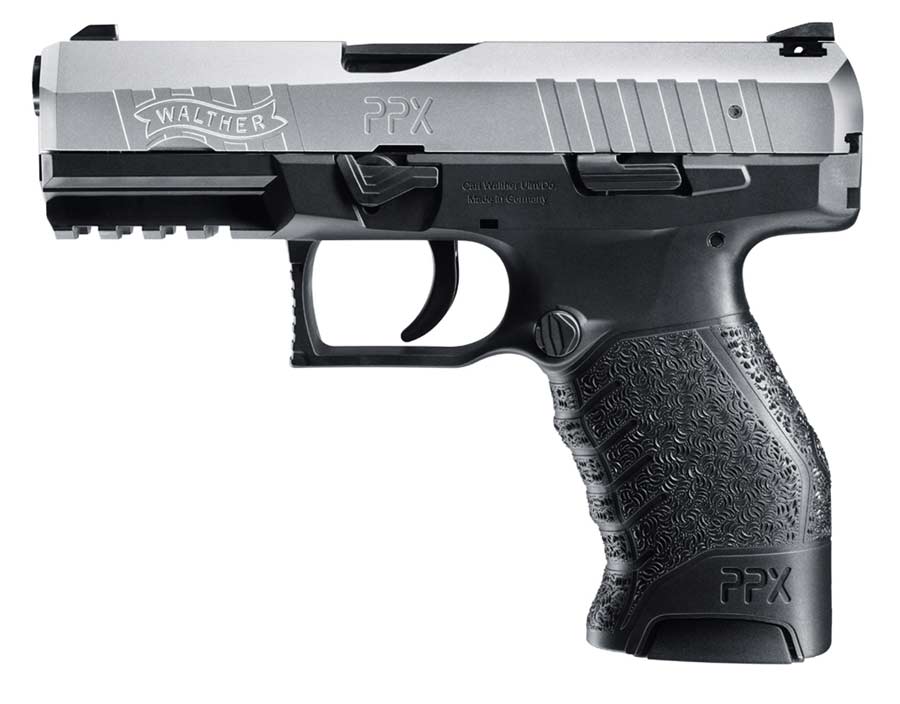 I was able to give everyone a sneak peak at the Walther PPX back in November when I was at the 2012 NASGW Expo. Â Now, Walther has officially pulled back the covers and is proudly showing their new duty-sized pistol.

Before we go any farther, I best address the obvious: Â the gun’s look is polarizing. Â Some people like it…others think it is an abomination. Â Seeing it in person, well, it doesn’t look much better than the photos. Â But, it does feel pretty good in the hand. At the end of the day, how it shoots is much more important than how it looks, right? Â Who’s with me?

The Walther PPX is a polymer-framed gun, but is hammer fired, not striker fired. Â Most polymer guns are sporting a striker system, so this is a bit of a departure. Â The good news is the trigger pull is consistent, with about a 6.5 pound pull each time. Â When I was at the NASGW, the rep I spoke with described the action as being “kind of” pre-loaded, so the pull will always be light. Â The proof, though, is on the range. Â Hopefully, I’ll get a crack at one of these in the near future. 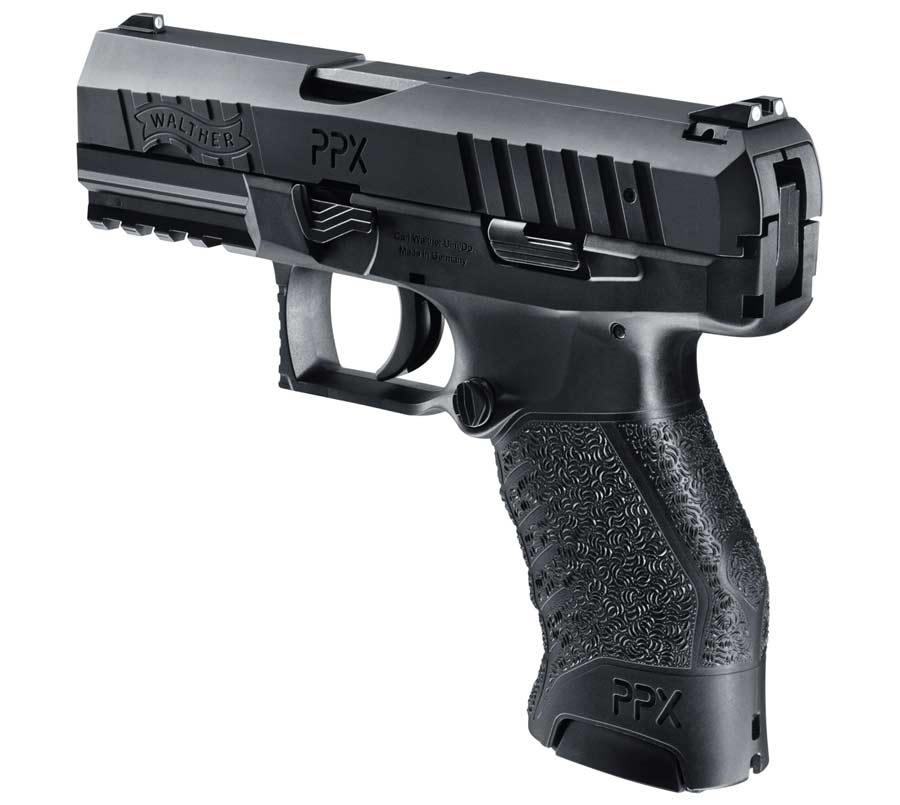 Thankfully, the magazine release is a traditional push button release. Â I know many people profess to like the other lever-style releases that Walther has on other pistols, but I much prefer the push button style. Â The magazine release on the PPX is described as ambidextrous, so southpaws get an equal shot at it.

The first models will be available in 9mm and .40 S&W. Â When I spoke with the Walther rep about additional calibers, like .45 ACP, he seemed very non-commital. Â So, I would not plan on seeing a .45 in the near future. 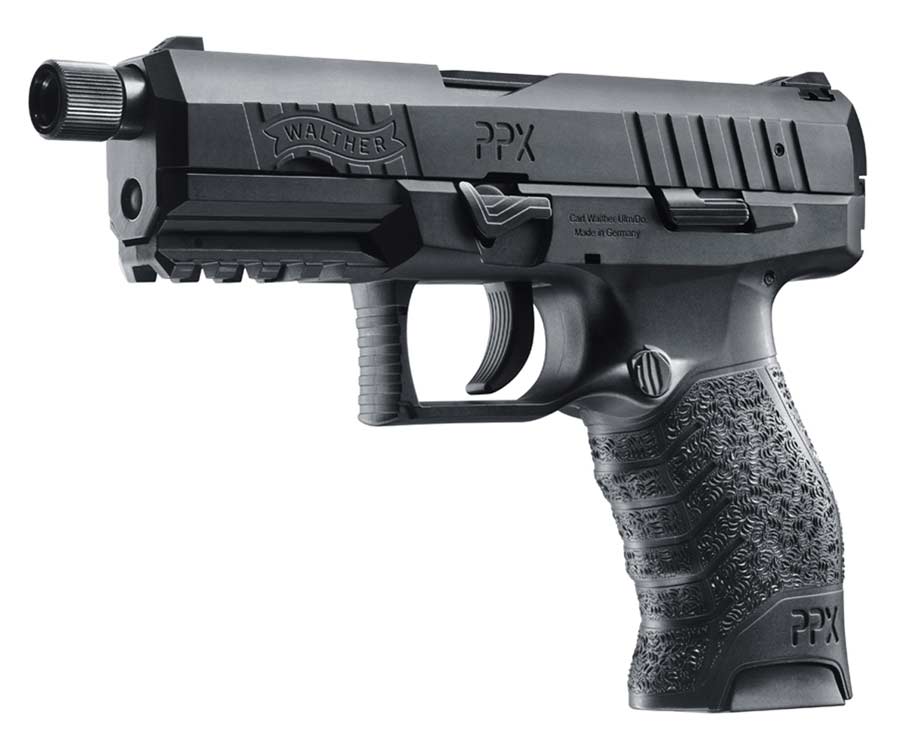 The fifth gun will be in 9mm, will have a black slide, but will also have an extended, threaded barrel. Â This version is called the “SD”. Â All barrel lengths are 4″, with the exception of the SD. Â That barrel will be 4.6″ long.

Magazine capacity is 16 for the 9mm and 14 for the .40 S&W. Â Low-capacity ten-round magazines will be available for people living behind the iron curtains of the less-free states. Â Total weight on the standard guns is given by Walther as 1.7 pounds with an unloaded magazine. Â That works out to be a little more than 27 ounces. 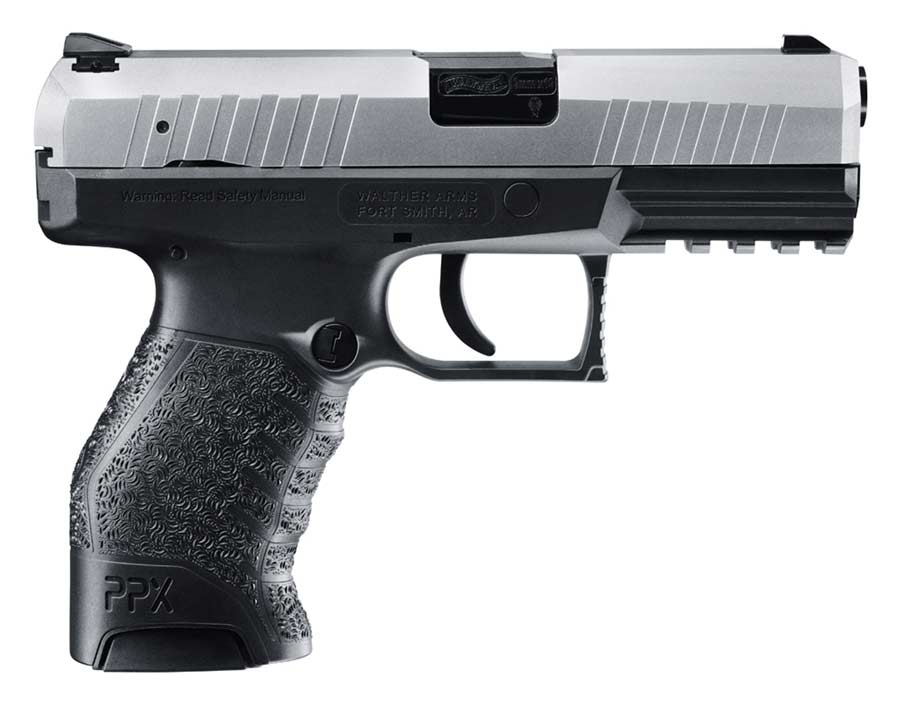 I should be able to get more information on the Walther PPX this week at the SHOT Show. Â Walther is listed as an exhibitor at Media Day, so hopefully I will get some trigger time with this gun then.

The Walther PPX is a new gun being introduced at the 2012 NASGW Expo this week. Â The new pistol is a polymer frame, hammer fired handgun. Â Right now we have limited information on the new gun, but here are some of the things we know.

The magazine release is frame mounted and reversible, suggesting a conventional push button release instead of the lever-style found on Walther pistols like the P99, PPS and P22 models.

The Walther PPX will also have a loaded chamber viewport, which could be very similar to the ones found on the Smith & Wesson M&P pistols. Â Even though the relationship between S&W and Walther is winding down, there is likely still some sharing of ideas and technology.

The new PPX is said to have a consistant trigger pull, suggesting a DAO (double action only) gun. Â The gun is not a striker fired pistol: Â it is hammer fired.

Right now, I do not have information on the size of this pistol. Â It could be a “duty” sized gun, or something more compact. Â However, the PPX is supposed to have a Picatinny rail. Â While compact guns can definitely have an accessory rail, a subcompact gunÂ generallyÂ cannot.

We’ll be at the Walther booth during the next couple of days, so expect to get more information on and photos of the new Walther PPX pistol.

Good luck finding a level two or higher duty holster if your left handed which kinda sucks because I like this gun but will probably have to sell it because of that!

Take a look at the new level III from Dara Holsters: http://www.daraholsters.com/d3-level-iii-duty-holster-owb-only/ They are being introduced this month and are being offered for the PPX right out of the gate.