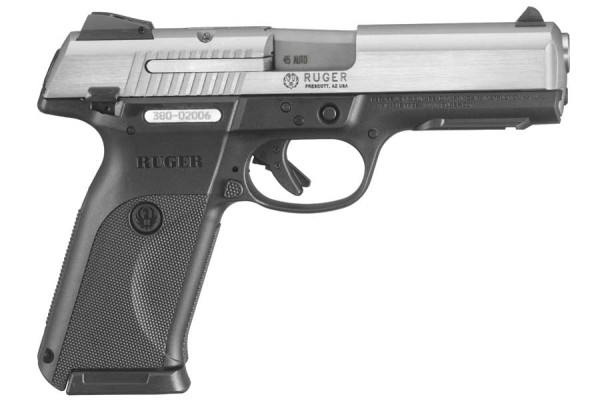 The Ruger SR45 is now a reality. Â Just days ahead of the 2013 SHOT Show, Sturm, Ruger & Co announced the big bore addition to the company’s popular “SR” series of handguns.

Chambered in .45 ACP, the new SR45 comes standard with 10-round magazines, giving the shooter a lot of firepower. Â Yet, Ruger claims the SR45 remains a relatively thin pistol like the SR9 and SR40. Â According to the specs, the SR45 is 1.27″ wide, which is just 0.07″ wider than a Smith & Wesson M&P. Â The grip width is not specifically mentioned for the SR45. 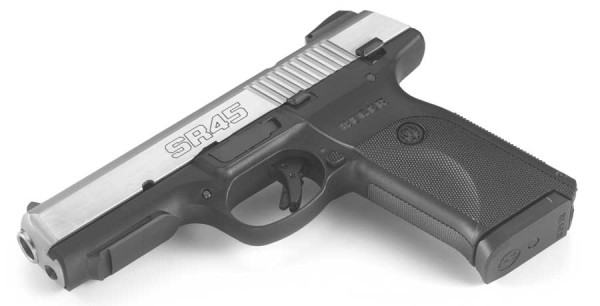 The gun ships with two 10-round magazines. Â It also comes with a magazine loader and ships in a hard plastic case for storage and transport.

Like other models in the series, the Ruger SR45 has a reversible backstrap, allowing for an arched or flat rear grip frame. Â This allows a shooter to better fit the gun to his or her hand. Â The thumb safety and magazine release button are both ambidextrous.

Like many modern pistols, the new SR45 comes with a mounting rail for attaching accessories. Â So, feel free to add a white light, laser or another doo-dad to your new Ruger pistol. 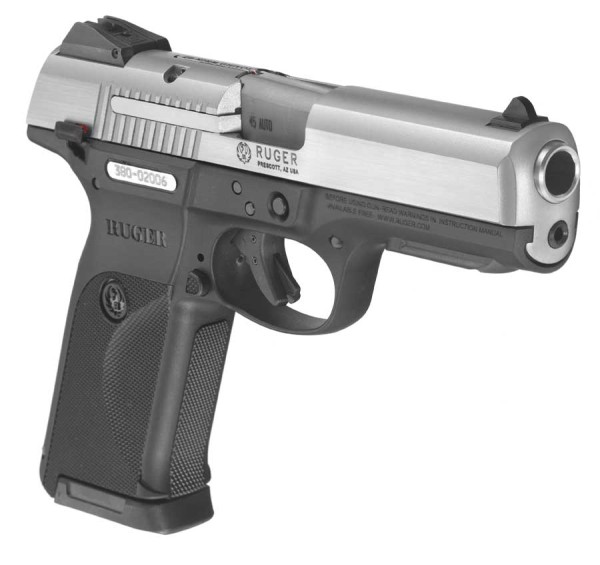 Sights are standard three-dot with the rear sight being angled to reduce the chances of it catching on anything during a draw. Â The rear sight is adjustable for windage and elevation.

No doubt a lot of Ruger fans will appreciate this addition to the SR line. Â It seems that ever since the first SR9 was announced, that people have been clamoring for a .45 ACP version of the gun. Â The problem is the .45 is so much a larger cartridge, merely upsizing the caliber, as many do with the 9mm to .40 S&W, is not generally possible.

Time will tell how popular the SR45 will become. Â However, Ruger has done a very good job in recent years in identifying what new guns to bring to market. Â Clearly this gun has been under development for a while, and it will be interesting to see how it is received. Â We will be at the SHOT Show again this year and bring you all of the details, including more photos and videos, of the gun then. 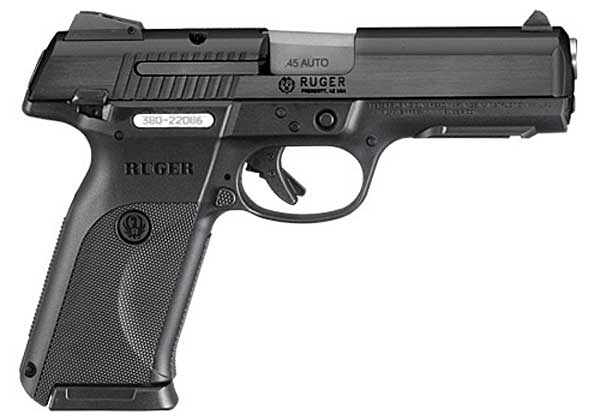 Ruger is an exhibitor at Media Day, so we should be able to get some trigger time with the pistol and give you anÂ initialÂ evaluation of the gun then. Â Meanwhile, we will keep everyone informed on any new developments regarding the Ruger SR45 that happen before then.

Any idea where I can get a descent holster? Perhaps something like the Sherpa…

I paid 322 plus shipping and tax