“The next generation of submachine gun is here,” states a SIG Sauer video demonstrating the all new SIG MPX.  The SIG MPX is a new submachine gun that the company is expected to show off at next week’s SHOT Show.

There are a number of features that really set this gun apart from others in this category.  First, according to the video, the SIG MPX is the world’s first submachine gun to work with a fully closed and locked rotating bolt system.  The gun uses the SIG Sauer short stroke gas piston system that the company has used on their other rifles.  There is a last round hold open.

(Ed. note:  A huge thank you to Scott for sending me a link to this video.)

Something else that is pretty distinctive about the SIG MPX is a shooter can quickly change barrel lengths, caliber and stock configurations in the field.  When you watch the video, you will see someone swapping out a barrel fairly quickly.  According to the company, the SIG MPX is “an entire system that can be configured for any operation.” 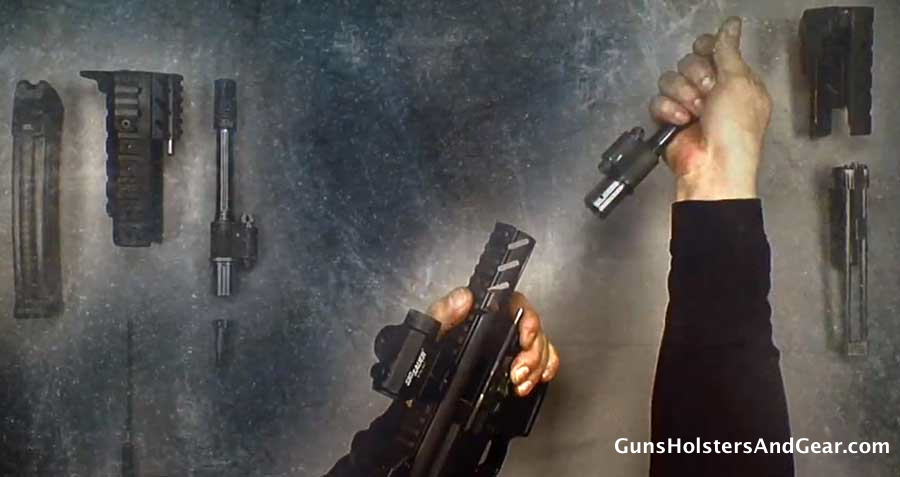 The gun will be available in multiple configurations.  Select fire versions are limited to government buyers in the United States, but several semi-auto versions will be offered also.  One will be a short barrel rifle (SBR) configuration with a 6.5″ barrel and telescoping stock.

The other semi-auto version has a 6.5″ barrel with a permanently attached 9.5″ long muzzle brake.  If you take a look at the photo below, you will see the muzzle brake is essentially a wide open skeleton that appears to be more about getting around the stupid National Firearms Act and less about decreasing muzzle rise.  Frankly, I love it. The SIG MPX will be available in three pistol calibers:  9mm, .40 S&W and .357 SIG.  I’ve speculated before that this gun chambered in .357 SIG would be a great SMG.  The .357 SIG rounds are already fast out of pistols.  With a slightly longer barrel (6.5″ instead of 4″ or 4.5″), one could expect them to be even faster.  Using the data at Ballistics by the Inch, I would guess that a standard Federal 125 grain JHP would jump up about 150 fps by shooting it from a 6.5″ barrel.  At about 1550 fps, that round would likely defeat soft body armor.  For a SWAT team, this might make an excellent alternative to the MP5 and AR15 platforms.

Meanwhile, I am going to try to get a carbine version for review.  Shooting a SIG MPX  is going to be a blast! 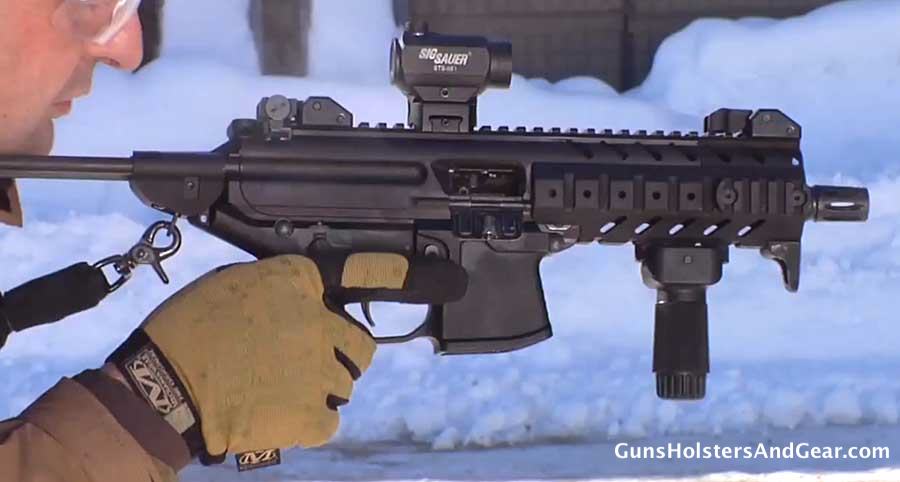 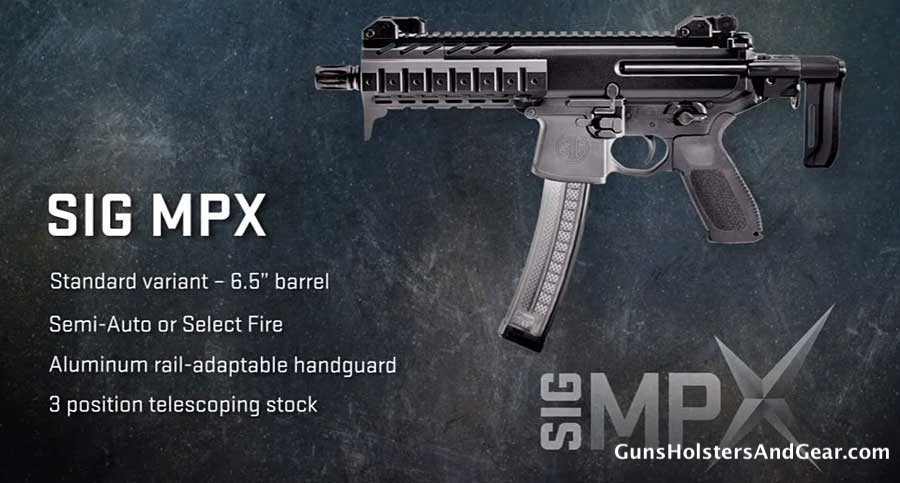 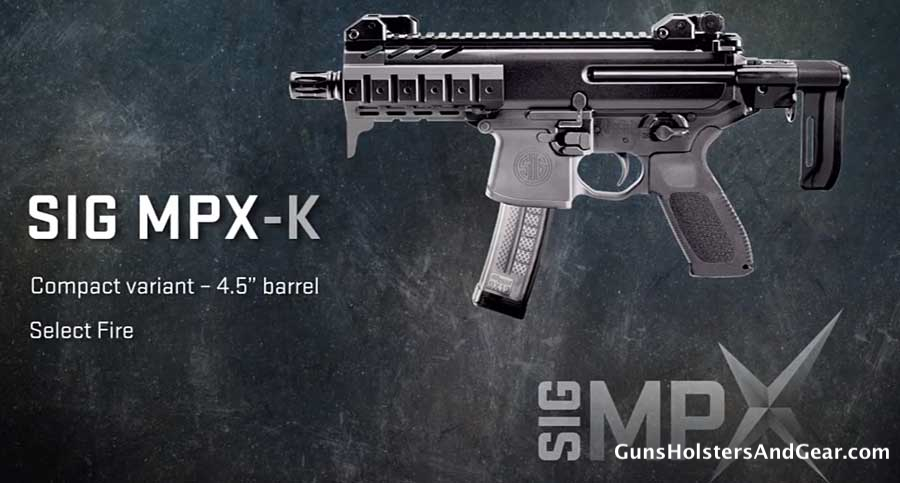 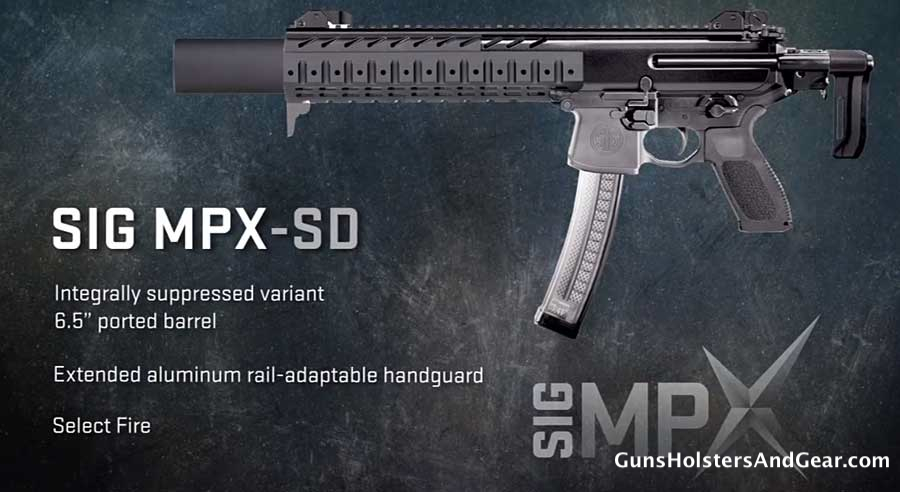 The SIG MPX was a “no show” at the 2013 Media Day, but I have been promised that the guns will be on the floor of the SHOT Show tomorrow.  So, I will be able to get my hands on them then and let you know how they feel.  I will also bring you more pictures of the guns then.

I’m still loving the 9.5″ muzzle brake used on the 6.5″ barrel to skirt the “short barrel rifle” designation.  While I think it is abhorrent that a law prevents citizens from owning an arbitrary barrel length firearm without any good reason, I also like it when a manufacturer uses one of the many ways around it to build a gun people want.

The very large openings in the brake are likely to help keep the civilian SIG MPX better balanced.  I’ll let you know how it feels after I handle one tomorrow. 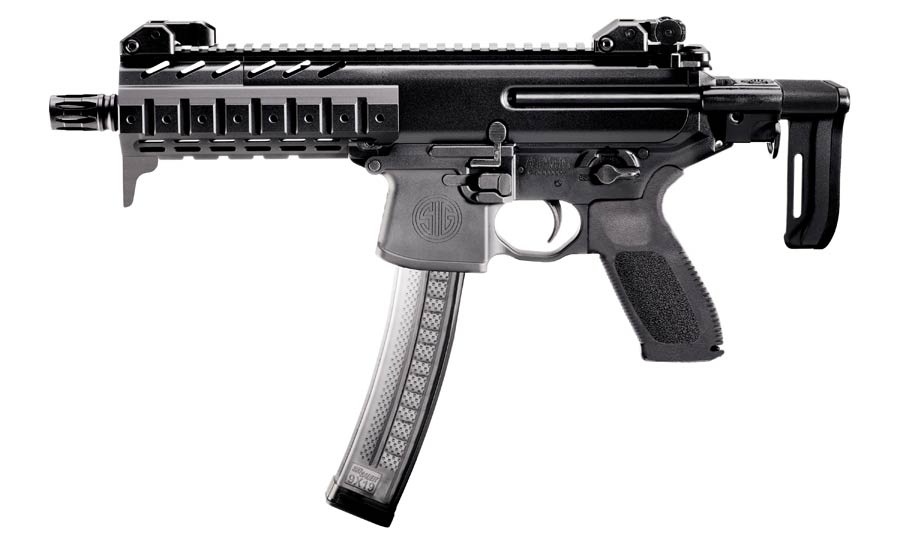 SIG MPX is the official name of the new SIG Sauer submachine gun that has been rumored ahead of the 2013 SHOT Show.  I have been in contact with sources at SIG Sauer, who have confirmed both the gun and the new name.

For those not familiar with the information on this new SMG, the SIG MPX will be a pistol-caliber sub-gun with controls very similar to those of an AR-15.  The first run of guns will be chambered in 9mm, .40 S&W and .357 SIG.

A full auto version will be available, though restricted to government buyers in the United States.  However, there will also be two civilian versions of the SIG MPX:  a 16″ barrel carbine and a short barrel rifle (SBR) version with an unknown length barrel.

Pistol caliber SMGs have been popular with various military and law enforcement units, with the HK MP5 being the standard by which all other modern sub-guns are judged.  However, I have seen a migration away from the MP5 to short barrel AR-15 carbines by many SWAT teams.

Only time will tell how popular the SIG MPX will be.  However, I can see the .357 SIG version as fitting into a neat position between the MP5 and the AR-15.  It would maintain many of the benefits of the MP5, such as size and less report than a SBR AR-15, yet provide more “stopping power” than a 9mm.  Also, out of a longer (than a pistol) barrel, the .357 SIG cartridge is likely to defeat most soft body armor.

Just when I think I can’t be surprised, I get an e-mail about the new SIG SMG.  The new SIG SMG is a submachine gun being introduced by SIG Sauer at the 2013 SHOT Show in Las Vegas.

According to the photos I have seen, it looks like the SIG SMG has a folding, collapsible stock, a full length Picatinny rail for sights, a quad rail fore end, and an AR-style flash suppressor.  The bolt release, pistol grip and selector switch all look very similar to AR controls.

The uppers will be changeable in a manner similar to the AR platform.  This will allow the shooter to swap calibers and barrel lengths.  Initially, the SIG SMG will be available in 9mm, .40 S&W and .357 SIG.  According to SIG, the gas system is self regulating and can handle swaps between the above calibers without problems.

I am told there will be three versions of this gun (not including the different calibers.)  A full-auto version will be available for military and law enforcement.  Two semi-auto versions will also be made for civilian purchase:  an SBR (short barrel rifle) and a 16″ carbine.

I imagine this gun is a screamer with the .357 SIG rounds loaded.  The bottlenecked SIG cartridge offers a significant step up in velocity when compared to the 9mm, and in an SMG, I believe this would be an awesome CQB round.  Although not designed to do so, the .357 SIG would likely defeat soft body armor, while maintaining the gun size benefits associated with a pistol caliber SMG.

Many law enforcement agencies have been turning in the MP5 SMG and going with short barreled AR-style rifles.  While the 5.56 offers some distinctive benefits for an entry team, a more compact SMG loaded with .357 SIG might be a good step up from the MP5 without running into some of the negatives associated with the very short barreled AR guns.

According to the company, the new SMG is still without a name.  They could go with the SIG Sauer Ass-Kicker or the SIG Blaster, but I expect they will use some number for a model designation like “P226”, “P238” or “Seven of Nine.”

Tip o’ the fedora to Tactical-Life.com for the photos.  They have more, and you should immediately go check them out.

The SIG MPX and SIG MCX are looking like fine pieces of engineering. Can’t wait for the releases. Time to stock up on ammo,magazines, and new range toys. Stoked.