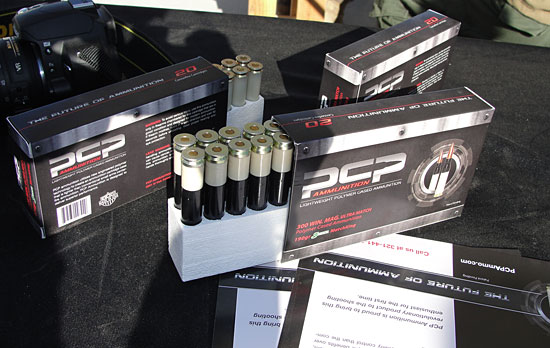 As of December 2013, PCP Ammunition announced they are ready to start commercial sales of a polymer-cased .308 Win round. Â The new ammo will use a 168 grain Sierra MatchKing HPBT bullet, by far the preferred bullet for law enforcement snipers. Â Additional specifications have not yet been released. Â The following is the original article we wrote on the ammo from the 2012 SHOT Show.

One of the most interesting ammunition vendors at Media Day 2012 was PCP Ammunition, out of Reston, Virginia. What immediately strikes the eye is the multi-colored casings. What those colors mean may very well revolutionize the way we shoot in the future.

PCP Ammunition is now offering Match Grade ammunition using polymer cases and top quality bullets from Sierra, Barnes, and Berger. In addition to reducing overall cartridge weight by 30%, PCP claims that the new polymer casings actually increase accuracy across the board in the different cartridges it manufactures. The revolutionary polymer case design has a patent pending.

PCPâ€™s literature states that the company has â€œcreated a revolutionary loading and inspection system that far surpasses anything available in the worldâ€. The company uses â€œbest in classâ€ loading equipment and integrates this with a fully automated loading, primer, and bullet sealing system. The system continues to an â€œevery roundâ€ quality control process that uses machine vision to verify that the cartridges have the correct appearance, sealing, and dimensions.

PCP states that this patent-pending technology is based upon the latest military brass sorting and inspection system. These cartridges are designed to meet SAAMI specifications in dimension and pressure.

The development of a polymer casing is huge to the ammunition industry for several reasons. First, as weâ€™ve seen in recent years, ammunition costs have been much more volatile with the rise and fall of the precious metals market. 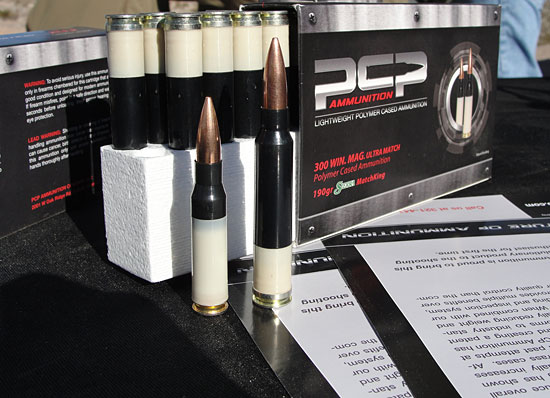 Second, for anyone who has to carry a lot of ammunition or carry ammunition long distances, weight becomes a critical consideration.Â  Humping a few hundred rounds up and down some mountain in Afghanistan sucks, and lightening the load would be a welcome relief for many a soldier or Marine.

A 30% reduction is huge! Even if you donâ€™t carry or haul a large amount of ammunition, the reduced weight should have a big impact on ammunition prices due to the saved costs from buying metals, and the reduced shipping costs due to lighter weights.

Third, the reducing or elimination of heat transfer to ejected casings has big implications for military and law enforcement shooters who often are firing multiple rounds in close proximity to other shooters.

Finally, if, as PCP claims, the polymer casing can seal better in the chamber during firing this could result in a more consistent discharge of the bullet at maximum pressure and resulting in greater velocity and accuracy.

I got to talk with PCP Senior Adviser, Pete Forras, at Media Day and he provided me with some interesting information on a very interesting new development in ammunition.

In addition to being 1/3 lighter than traditional brass-cased cartridges, the polymer cartridges have little or no heat transfer. What this means is that as multiple rounds are fired through a rifle (currently PCP only makes rifle ammunition) and the barrel heats up, the heat will not transfer to the casings that enter the chamber.

Forras told me that, in essence, you could catch a polymer casing in your hand that had been fired through a barrel with hundreds of rounds through it in a short amount of time.Â  Having been on the receiving end of burning brass many times this is definitely a benefit of polymer casings!

Forras explained the science behind the polymer. When a cartridge is fired the brass casing expands slightly outward engaging the chamber and then releasing the bullet from the pressure thatâ€™s built up. According to Forras, brass casings often do not completely engage the chamber due to minor deficiencies in the casing or wear in the chamber. This causes the release of the bullet before or after maximum pressure is reached, which causes differences in velocity and ultimately accuracy.

The PCP polymer casings are designed to completely expand and engage the interior of the chamber to maximize the pressure of the cartridge during firing. The bullet leaves at the ideal pressure which increases velocity and accuracy.

Foras stated that PCP has conducted itâ€™s own tests and discovered an increase of 65-75 fps consistently across all their different cartridge calibers.

According to Forras, the prices of each caliber will correspond approximately with the prices of â€œpremiumâ€ brass cased ammunition. However, Forras did say that PCP is currently seeking contracts with the military. If those contracts go through, Forras said that production will increase and the price will go down. 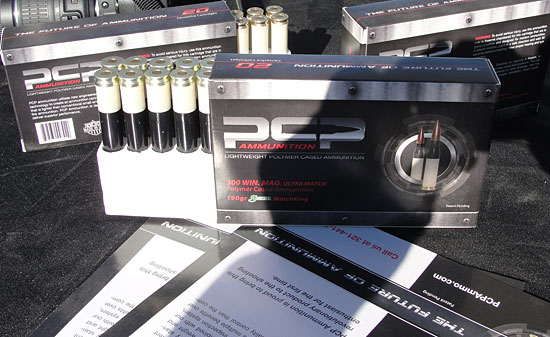 I was able to fire some PCP .308 Winchester ammunition at Media Day. I was able to hit a steel target at 100 yards with no problem, and the recoil seemed to be less than traditional ammunition. The casings did not jam, or become disfigured upon ejection after firing. With their casings topped with Sierra, Barnes, and Berger bullets Iâ€™m excited to do more testing of these cartridges under more controlled circumstances than Media Day allows.

Forras advised that the PCP polymer cased ammunition will be ready for commercial sales in March, 2012. I plan on buying a few cases in 5.56 mm and .308 Winchester to test on the rifles I own and use. Iâ€™ll let you know how it turns out.

Will you have a great point there.

I think Richard touched on that point when he talked about failure to fire issues and the potential for the 2-stage polymer cases to become destabilized from heat – especially in military applications where 100’s or even 1000’s of rounds could be fired in a single engagement. It may be that one of the great benefits from polymer casings could be one of its greatest detractors as well. Less heat in the ejected polymer case (great) means more heat left behind in the chamber and barrel (bad).

I think that is why we still have a few more innovations to go before polymer casings become a reality. However, many of my friends who have shot the piston systems on AR-15’s (a system that is traditionally very hot after only a hundred rounds or so with the gas impingement) have found them to be remarkably cooler in firing. Not to mention that they have been incredibly more easy to clean after shooting.

It could be that the polymer case must find a match in a piston system or at least find a platform that finds an innovative way to disperse the heat without losing the pressure needed to maintain velocity and accuracy.

Sounds like a very daunting engineering problem, but one that I think has a lot of merit (and profit) should the solution be found.

Thanks so much for you insights!

Hello Aaron, Will
As I mentioned earlier, I have done some tests in the past with the PCA, which is (was) the same concept. To the benefit of the Polymer case, I can tell you that it really does not matter much (regarding the heat of the gun) because in both cases that barrel ends up going to 900’s , depending on the amount of rounds fired and the interval.
When a polymer case fires, and with the polymer being a less conductor of heat than brass, what happens is that this “non-conductivity” transforms the “gain” of heat into more energy, obviously pushing forward towards the only open “de-pressurising” zone. That is why the polymer case (I am always talking abt the 223 here because the time I tested those that was the only caliber) needs less powder (I believe ard 22 or 23 gr if I remember well) to achieve same velocity out of the nozzle as the brass case. Which is fortunate for the Polymer case, because they cannot make those walls as thin as the brass case, it will not hold. The walls of the polymer case are thicker (by a few “thousands” of an inch)
I will be testing the PCP as soon as I can get them in the amounts needed, but that might be only in Spring, I am away for the next 3 months !! Hopefull by then we might see something new from PCP.
Take care and happy holidays.

More great information Richard. Thanks for all the insight. It really helps us get a feel for how close, or far, this type of ammunition may be for shooters.

I obviously meant to write muzzle, not nozzle [email protected]@!

Hi Guys, two years have passed since we last spoke (wrote) about this, and still no PCP ammo on the market. As a matter of fact, I believe they are facing the same problems that the PCA was facing, especially when it comes to fluted chambers. Have a look at this report from TLB, it says plenty ! And yes.. be careful!