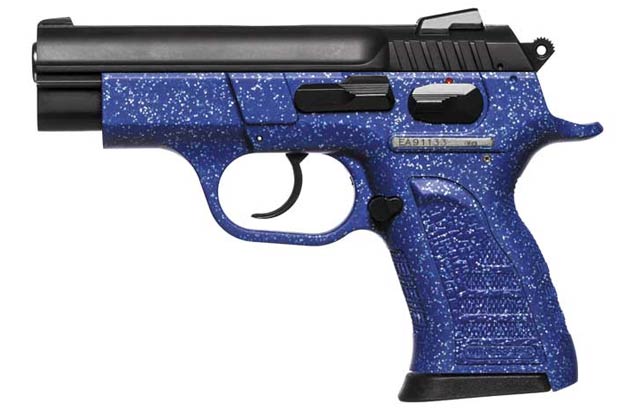 EAA is now selling a line of pistols designed for women shooters. Unlike some companies that simply paint a gun pink and deem it a “woman’s model,” the new Tanfoglio Witness Pavona guns are seemingly more than just flash. Â Tanfoglio enhanced aspects of the gun’s operation to make it easier to operate, especially for people who may lack upper body strength.

One of the common complaints that I have gotten from women shooters is that a pistol slide can be difficult to operate. Â Many times, this problem can be overcome through technique and training. Â However, for some people – especially those who are elderly, ill or handicapped – no amount of technique can make up for the basic lack of strength. Â This is one reason that tip-up barrel handguns like the Beretta Model 21 and the Taurus 25 PLY tend to sell well. 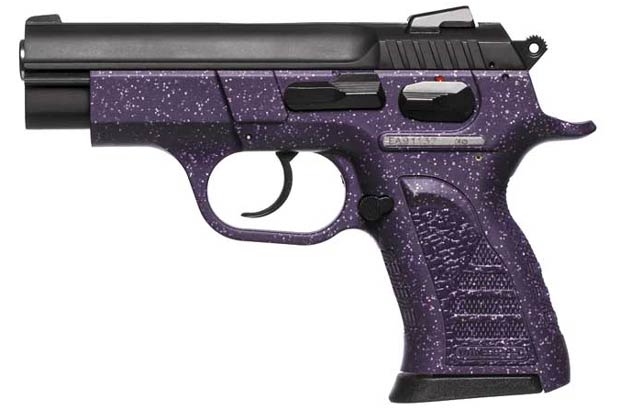 I am not an expert on Tanfoglio pistols, so I do not know if the third item is a normal ability in the Witness line. Â Comparing the Witness Polymer Compact to the Witness Pavona, I do not see any obvious differences between the two slides that would cover the first item. Â It is possible that EAA is comparing the guns to another product. 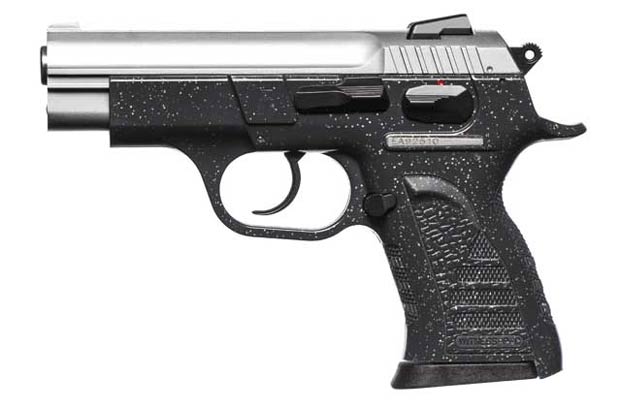 The guns sport a variety of unique color combinations. Â The polymer frames have a base color of black, charcoal, imperial (dark purple), sapphire (blue), or fandango (light purple). Â Then the frames are infused with some kind of metal flake that give the frame a sparkle. Â The flakes can be gold or silver. Â As a final finish option, the slide assembly can be either blue or chrome.

The new guns will be available in three calibers: Â .380 ACP, 9mm and .40 S&W. Â Note that the Witness Pavona instruction manual states that +P ammunition should not be used in these handguns. Â So, that will preclude the use of many popular self-defense loads in 9mm.

Compared to the Witness Polymer Compact…

The Pavona pistols look very similar to the Polymer Witness Compact line of guns. Â In fact, the external dimensions listed on the EAA website are identical:

However, there are four differences (other than color) that I see: Â weight, the elimination of an accessory rail, magazine capacity and MSRP.

Magazine capacity is reduced in the Pavona as compared to the Polymer Compact. Â This is a bit perplexing to me, as the external dimensions are the same. Â However, here are the differences:

Lastly, the Pavona pistols have less expensive price tags. Â Pavona models with blued slides carry a MSRP of $476, while the chrome versions retail for $528. Â The Polymer Compact retail for $571 across the board.

I originally wrote aboutÂ the Pavona line of guns in NovemberÂ after EAA showed them at the National Association of Sporting Goods Wholesalers exposition. Â We will get by the EAA booth and get photos of these new guns at the SHOT Show next month.

Thanks to one of our readers, Jay, we discovered Witness updated the slide serrations have been updated. Â The following photos are of the updated pistols from Witness. 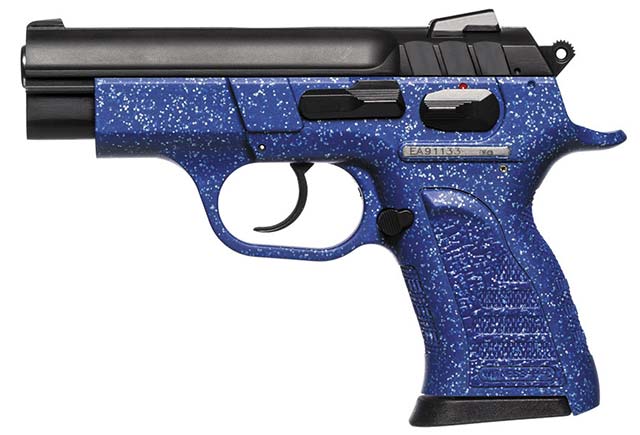 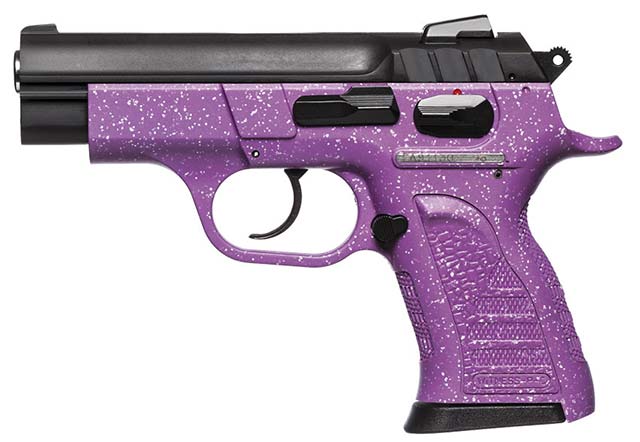 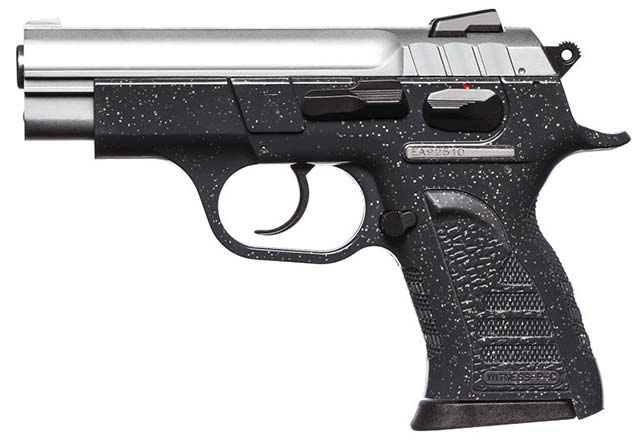 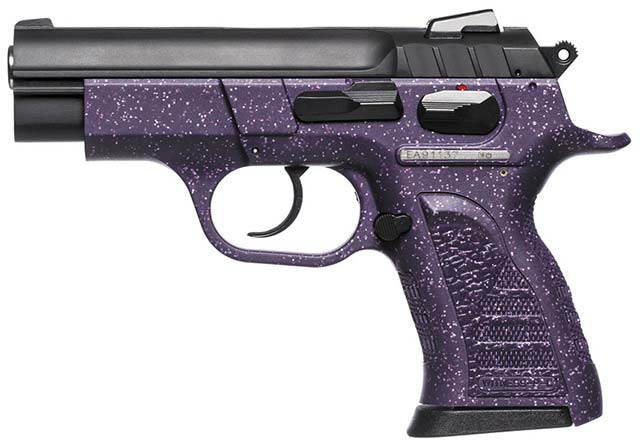 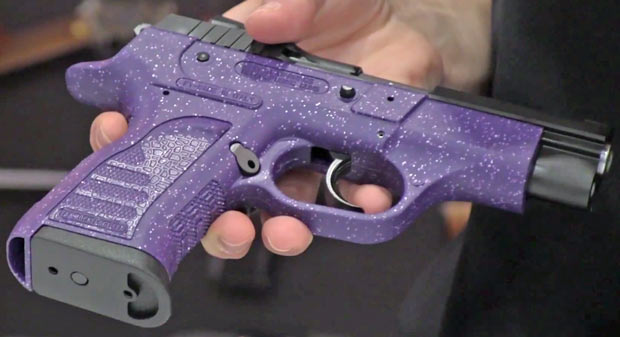 European American Armory Corporation, or EAA, showed off a new line of pistols at the NASGW Expo geared for the female market. Â While part of the marketing for these new handguns is the availability of non-traditional colors, the company is going a step farther and is addressing the issues that some people have with running a pistol.

The new EAA guns willÂ have lighter-than-normal recoil springs and trigger springs combined with a heavier-than-normal firing pin. Â The idea is to have a gun that is easier to operate, yet retain reliable functioning. Â I have talked with a number of women who have expressed frustration when trying to operate slides with strong recoil springs. Â While technique can help almost anyone overcome this problem, having a gun that is easier to work from the outset is likely to be quite popular. Â These new guns are built specifically to give the shooter an easier slide to operate.

The handguns are still under development, butÂ they appear to be Tanfoglio Witness Polymer Compact pistols minus the accessory rail. Â After getting feedback at the NASGW Expo, I expect the company will take distributors comments back to the engineers to develop the final product. Â At the SHOT Show we will probably see the finished article.

While a purple handgun is not my thing, I do appreciate that EAA is bringing unique styling to market with these handguns. Â Colors such as blue, purple and gray were shown, but the sparkles that are built into the polymer give these guns a unique look. Â Some might consider colors and sparkle as frivolous, but DuraCoat has made a business out of turning guns into something resembling a hot rod out of a ZZ Top video. Â I’m all for giving customers options.

Gallery of Guns interviewed Sharon Lacy of EAA about the new guns and more at the 2014 NASGW Expo (see the video below.)

Although the new color options are attractive, I am happy to see the company is addressing more than just styling issues with these new handguns. Â Lacy said EAA is going to “…bling it out for the ladies.” Â If they make these in flat dark earth or OD, they might bring in the men as well.

It looks like an EEA SARB6P with a glitter frame