Photos and information about the SIG MCX line first started showing up in May at the 2013 Special Operations Forces Industry Conference (SOFIC) in Tampa, FL. Â Since that time, a little more information has leaked about the guns, but relatively little.

The MCX rifle started as a project for the US Department of Defense. Â The intention was to build a modular rifle platform that would be accurate and reliable, while keeping field cleaning and upkeep easy.

While we know that the SIG MCX can be configured in multiple calibers, we do not know if it is possible to quickly change calibers as is done on several other rifle platforms like the Desert Tech rifle (formerly Desert Tactical Arms) or the MGI Hydra. Â Current information suggests the guns will be available in 5.56 NATO, 7.62×39 and .300 BLK.

SIG Sauer will be giving a 90 minute presentation for law enforcement at the 2014 SHOT Show featuring the MCX. Â The seminar is called the “Enhanced Carbine of the Future,” and it will show off the benefits of having a modular carbine for police work. Â One of the examples given by SIG in the seminar description is being able to configure the MCX into a small enough package to store in a motorcycle’s saddlebags.

The term “striker-fired” has never been associated with SIG Sauer…until now. Â While not announced by the company, nor seen outside of a very select group of people, the P320 was first revealed in the SHOT Business magazine. 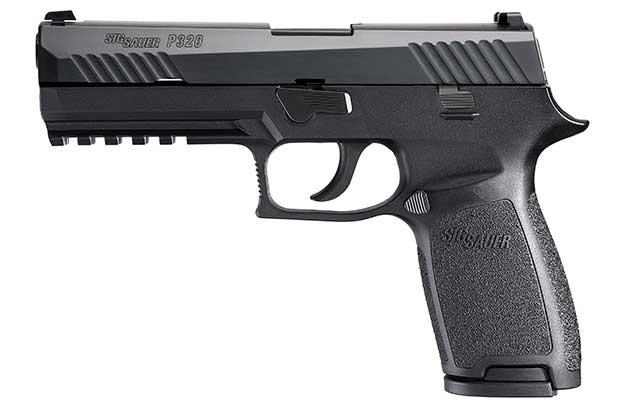 Keeping with the modular theme, the SIG P320 will be a polymer-framed gun that will allow the user to swap frame sizes, grip sizes and even calibers very quickly and easily. Â SIG Sauer has a good amount of experience with this technology after they developed it for the hammer-fired P250 in 2007. Â Beretta uses a similar technology in the Nano and Pico lines of handguns.

It is my understanding that the P320 will be heavily marketed to the law enforcement community. Â SIG Sauer has been in the top three of handgun providers for law enforcement, but may have been slipping in recent years due, in part, to the success of the Smith & Wesson M&P platform. Â Numerous agencies have dropped SIG Sauer products in favor of the M&P, including most recently, the Texas Department of Public Safety. Â An erosion of market share in police work is not likely to have been the sole factor in the P320 development, but it was likely a consideration.

With the SIG MCX platform, the company can offer a single source solution to agencies who equip their officers with both handguns and rifles. Â Based on what I have seen, this has been an advantage that Smith & Wesson has used to its benefit. Â The largest US law enforcement sidearm provider, Glock, is single-dimensional.

While SIG will grab the attention of the public with the MCX and P320 offerings, the company is also introducing other guns in the existing product categories. Â Among the new gun introductions are a pair of stainless steel framed 1911’s (one full size, one commander) that are finished in nickel PVD. Â Also, the company will release a .380 ACP version of the P290RS pistol.

SIG Sauer will not attend the annual Media Day at the Range, instead stepping out on their own with a private event showing off the new guns to a select few invitees. Â This is a departure for the company that has attended the Media Day in past years. Â It would seem to be a clear indicator that the new product lines are large enough to warrant more space than the Media Day could offer. Â The downside is that fewer members of the media will be able to talk about the guns with any actual experience. Â It is clearly a double-edged sword: more space, but less coverage.

There is little doubt in my mind that this will be a big year for SIG Sauer. Â Either the P320 or the MCX would keep people talking for a while. Â Introducing both together will make a significant splash in the market. Â Perhaps even more importantly, the guns will give SIG a chance to hit the law enforcement market with a one-two punch that will wrest some of the market share dominance away from Glock.

[…] pretty clear that SIG Sauer is aiming for the law enforcement market with this new gun platform. Â Take a look at my prior article on what the company is doing in 2014 to go after government […]

[…] pretty clear that SIG Sauer is aiming for the law enforcement market with this new gun platform. Â Take a look at my prior article on what the company is doing in 2014 to go after government […]