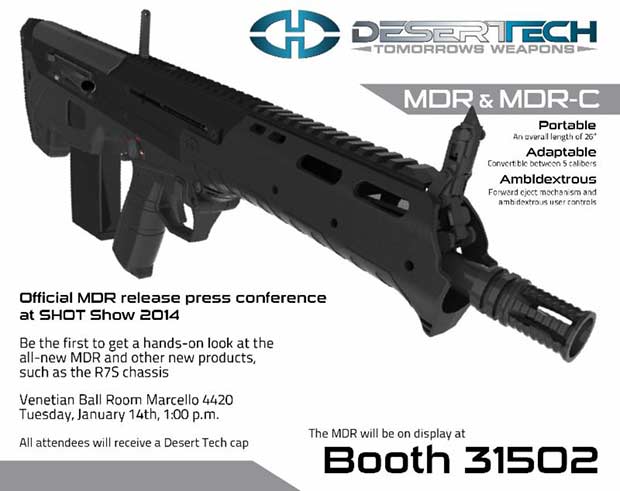 Desert Tech, formerly Desert Tactical Arms, announced a new rifle: the Micro Dynamic Rifle (MDR). The Desert Tech MDR is a compact rifle in a bullpup-configuration. With a 16.5â€ barrel, the overall length of the gun is only 26â€. This makes it an 1/8â€ shorter than the IWI TAVOR that was introduced to the US market last year.

The rifle will be available in five different calibers, and will be able to quickly convert between them without the need of tools. I would expect that 5.56 NATO and .300 BLK will be two of the calibers available.

The MDR uses ambidextrous controls and has a forward ejection system. This makes the rifle very easy to shoot and use from either shoulder.

A second MDR, the MDR-C, will also be available. This model uses a 10.5â€ barrel and will have an overall length of only 20â€. This could make for an exceptional entry gun for a military unit or tactical team.

Forward ejection is not a new concept and is used by both FN and Kel-Tec in currently manufactured rifles. Â The Desert Tech MDR appears to have a modified ejection port that pushes the brass forward, dropping it behind the trigger control group. Â This would keep brass from hitting the shooter in the face, but might drop it off the wrist/forearm. Â If it has enough velocity, the brass should shoot over the forearm. 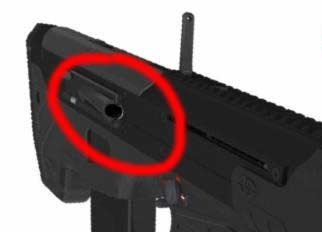 I’ve had the chance to shoot the company’s bolt-action gun and found it to be exceptionally accurate. Â With medium-priced, .308 Win ammo, Paul Carlson and I were shooting very nice groups at 100 yards. Â A look at the Desert Tech Stealth Recon Sniper in action: 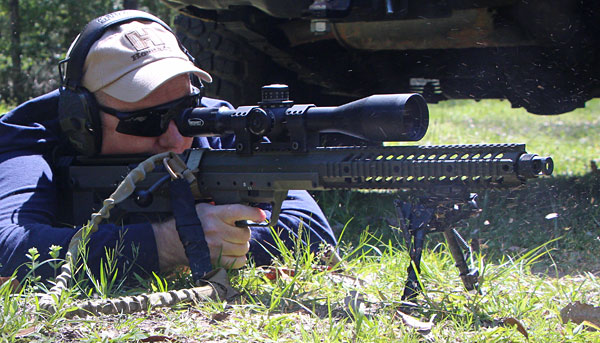 You know, some days it irritates me when companies just flat out steal ideas from other companies. But at least I’ve seen Desert Tech rifles on the shelf at my dealer. Can’t say that for the RFB.

I’m not sure what Desert Tech is stealing. Bullpup designs have been around for decades and Kel-Tec isn’t the first to come up with a forward ejecting gun. The FN F2000 outdates the RFB with forward ejection by about 6 or 7 years. Plus it appears the above design ejects forward, but is still behind the trigger group as opposed to the Kel-Tec ejecting at the end of the handguard.

Yep, you’re right. I wasn’t paying close enough attention. I should keep my pre-coffee comments to myself. Thanks!

I just wish some company would read all the studies on the ideal assault rifle, & …then build it. Considering all the new technologies, polymer construction, or magnesium alloys, newer carbon fiber wrapped barrels, increased ergonomics(ARX160), or bullpup configuration. There’s real opportunity here. This MDR is pretty darn close…potentially! Genius the ability to switch from AR10 & AR15 calibers. Genius! I know new capability adds cost, but the only reason you don’t see Ferrari’s all the time is cost. All that’s missing is real ideal calibers, 6.5 Grendel, Creedmoor, 7mm-08, 7mm UIAC! C’mon Chris, tell’ em!

[…] We will try to get more information for you on the TAVOR from the SHOT Show. I’m also looking forward to seeing another bullpup at the show: the Desert Tech MDR. […]