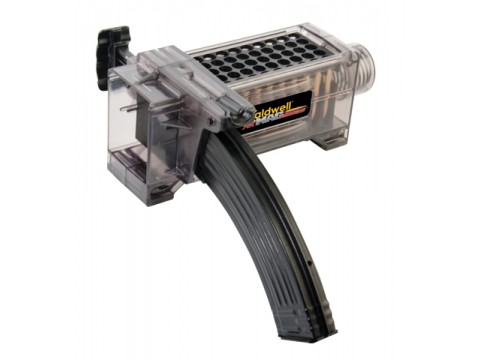 Caldwell will introduce a new Mag Charger designed for the AK-47 magazine. This will complement the existing AR-15 charging unit.

The new Caldwell AK-47 Mag Charger takes up to 50 rounds of 7.62×39 ammo at a time and lets you quickly load the magazine. The user strokes a piston on the unit to quickly load up to 10 rows of 5Â rounds into the magazine. According to Caldwell, the charger is compatible with any and all AK-47 magazines including former Soviet Bloc surplus and modern Magpul mags.

The unit is made of heavy duty polycarbonate. The material is translucent, so it is easy to see how many rounds are in the charger. If the AR-15 version is a good guide, the AK-47 Mag Charger should be a durable, reliable performer.

At the 2014 SHOT Show, the company introduced the original Mag Charger that was designed to quickly load 5.56 NATO ammo into AR-15 magazines. These have been wildly popular, and I expect that this one will be just as good a seller. See our look at the original product here. This is a video that Aaron got of the Mag Charger in action:

The S&W deal is set to be finalized in December, so it will be interesting to see what kind of cross-over might be seen at the SHOT Show. I do not think Smith & Wesson currently makes any 7.62×39 products. However, if they were to introduce an M&P15 that uses AK magazines (like CMMG did here,) I could see the company selling an AK-47 Mag Charger as part of a package with the gun.

If you are interested in reading about an AR that runs AK magazines, click here for my review of the CMMG Mk47.

You know, I was about to ridicule this thing, then I realized that AK-47 mags don’t have robust stripper clip support. So I’m kinda-sorta seeing a market for it, versus the AR-15 variant (where I vastly prefer stripper clips and a StripLULA).