In an effort to assist shooters with limited upper body strength and/or poor technique, Taurus now offers “wings” on the TCP pistol. The TCP with Wings as it is being called is an intriguing idea, but one that may be flawed in its current form.

I had a chance to handle one on the SHOT Show floor, and I spoke with a company rep. Here is what I learned…

The new Taurus TCP with Wings functions the same as a regular TCP. However, Taurus added a pair of metal flaps attached to the rear of the slide by hinges. Â The wings are retractable so that they are not constantly sticking out. 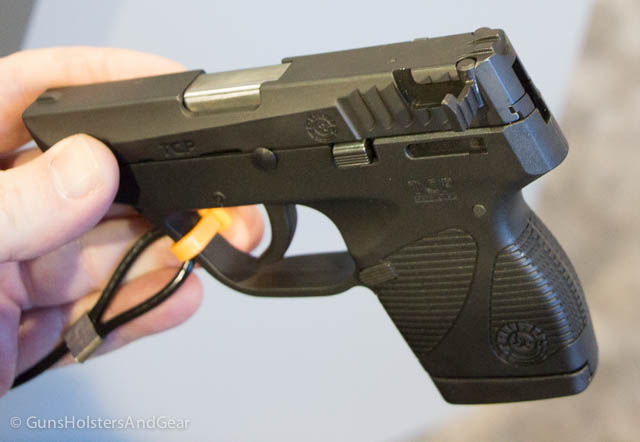 According to Taurus, these wings are specifically designed “…for shooters who may require assistance chambering a round or locking back the slide.”

I spent some time handling a sample model at the Taurus booth. The wings do offer a flat point to help with retracting the slide. However, I found a few potential problems with the configuration.

The wings are fairly difficult to deploy. There doesn’t seem to be an easy way to pull either of the wings out. Digging a fingernail behind the top of the flap works, but is a very fine motor skill that could not be done by anyone under pressure. In fact, the Taurus rep showing me the gun had difficulty in quickly pulling it out. 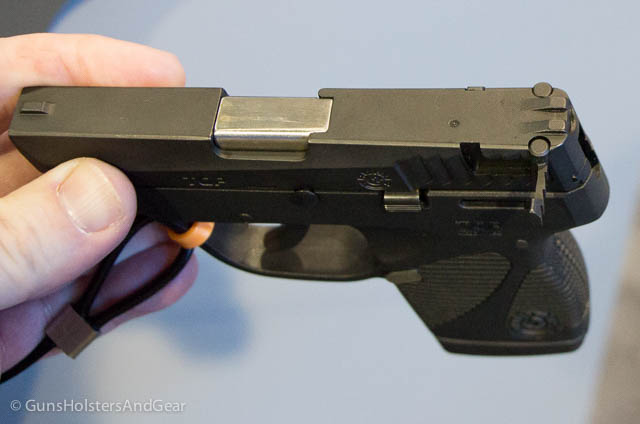 I am concerned that even if the flap never needed to be deployed in a stressful situation, someone with even minor hand trembles would have a very difficult time in getting the wings out.

Quite frankly, the wings are thin and do not feel like they would handle regular use. Both the hinge and the thin metal are potential failure points. 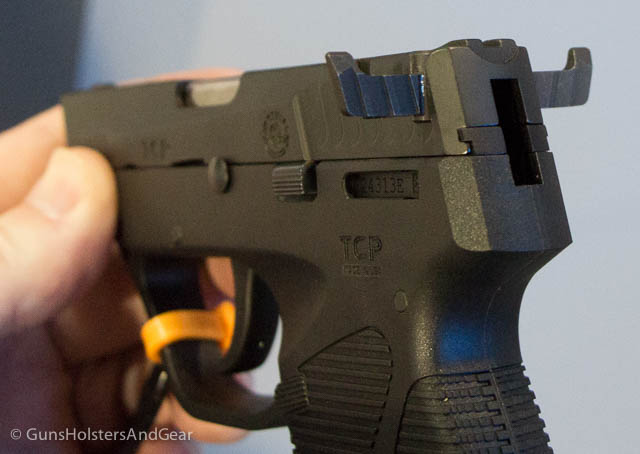 I asked the Taurus rep about the durability of the wings. He replied that the guns had more than 1,000 rounds through them. However, he was a bit vague about how many times the TCP wings had been tested.

There was also no clear statement from the Taurus rep that the wings would be able to handle the forces associated with using them for a one-handed reload. While this maneuver would likely beÂ uncommon, it is something I would hope it could accomplish – especially for a gun that could be used as a backup by law enforcement officers or others.

The finish on the hinges was pretty worn when I got to the gun on the first day of the SHOT Show. I don’t know how many times the gun had been handled prior to my arrival. However, I mention it as it might be important to some readers.

Taurus is expecting to ship the new TCP pistols by the end of the Q2. A MSRP has not yet been set, though the rep stated it should be close to the existing TCP models. 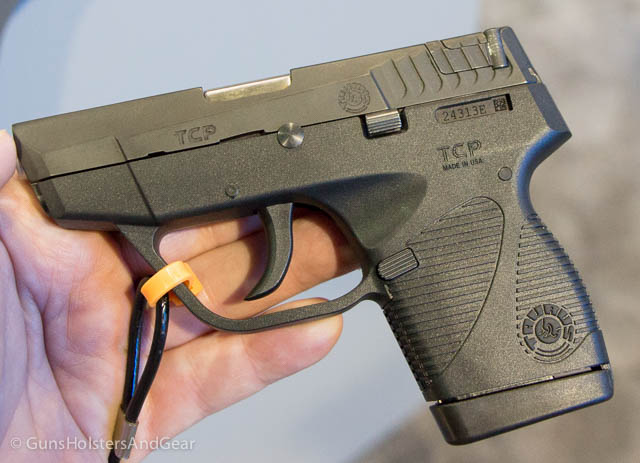 It is possible that the gun will be changed prior to release. While the first Taurus rep I spoke with stated the gun would ship “as is,” the second rep said he would take my suggestions back to the design team. The second rep stated the gun was still under development, so we might see a beefed up version when it hits the shelves.

In an apparent effort to create controversy, a person posted on his blog that these photos demonstrated poor gun handling safety on my part.Â Beyond that, this person made some unfortunateÂ remarks about me as an individual.

I understand that my regular readers are adults who exercise good judgment when handling firearms and are capable of being able to rationally think. Therefore, I do not expect that I have to explain the context of each and every photo taken on the site because my readers are not stupid.

However, for the benefit of any new readers that have made their way here from this individual’s blog, let me put these photos into context:

Gun safety rules are a good thing, but like most things they can be carried to the extreme and defeat common sense if applied with dogmatic zeal. The minute common sense is made to suffer for anyone’s “rule,” the rules should immediately be re-evaluated. History is rife with dogma trampling common sense at the detriment to all.

Should anyone have any questions about anything on this site, feel free to do what the unprofessional critic chose not to do – contact me.

Taurus returned to the drawing board and is trying again. At the 2016 SHOT Show, the company had a new version of the TCP with Wings on display. The new version has larger wings and a scalloped area on the slide for easier wing deployment.

I’m still not convinced the gun could handle the rigors of wing use on any regular bases. However, at least the company recognized the original design was not optimal and is trying to improve it.

19 replies on “Taurus TCP with Wings”

Evidently there is no one on this page that suffers from arthritis. I have it in my hands so bad I can’t pull the action back more then 3/4″ at best. This is just what someone like myself needs to be able to enjoy shooting a semi again. Revolvers are not for me, first one I fired burned badly, two of my fingers from the side blast.

Last year I sold two of my semi’s because I hated just using them to fill space in my gun locker.

It would be nice if all the haters out there would think about who needs these specially oriented models and why. Who know, maybe one of your young daughters who doesn’t quite have the hand strength to chamber a round without the wings may just need it to save a life.