At the recent SHOT Show, Savage Arms announced a new semi-automatic rifle chambered for the .17 HMR round. The new Savage A17 rifle was specifically designed for the .17 HMR, so it is expected to avoid the problems that Remington experienced with the 597 rifles.

Let’s take a look at the new A17 rifles…

According to Savage, the company designed a unique delayed-blowback system to properly control and use the pressures and bolt velocity generated by the .17 HMR round. The 17 HMR has been particularly troublesome for some manufacturers to get right in an auto loader. See the “semi-auto problems” section below for more information.

These rifles use a polymer stock – black being the only color initially. I would expect some of the standard hunting camo patterns would be available later if the guns sell well.

The A17 uses a 10 round rotary magazine. The adjustableÂ AccuTrigger is standard on these rifles. Take a look at the following video from IraqVeteran8888 about the A17 rifle:

Savage states the A17 rifle will safely and reliably work with any standard 17 HMR loads. However, Savage Arms worked with sister company CCI to develop a special load for this rifle. The new CCI A17 ammunition is said to be 100 fps faster at the muzzle than loads from other ammo companies. 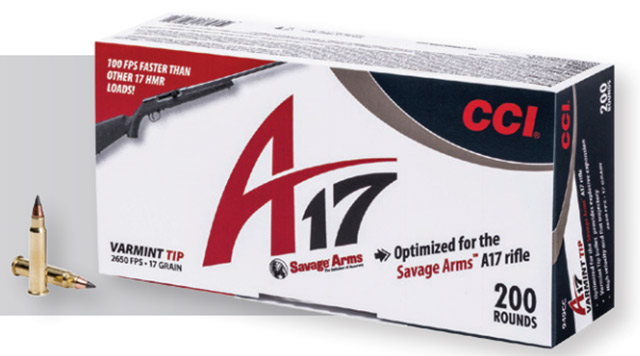 Using a Varmint Tip bullet – a 17 grain polymer-tipped hollow point – this round generates 2,650 fps at the muzzle. Although it is still a bit out of reach, this does put the 17 HMR closer to the 3,000 fps generated by the 17 Winchester Super Magnum that uses a 20 grain polymer-tipped bullet.

Savage is not the first to bring a semi-automatic 17 HMR rifle to the market. Previously, Remington sold the semi-auto Model 597 in .17 HMR. Unfortunately, there were problems with this gun, and Remington recalled all of the rifles without any repair options. Likewise, rifles made by Magnum Research and others were pulled from the market.

The higher pressure and nature of the pressure curve generated by the 17 HMR is such that simply modifying existing .22 LR rifle designs have failed. Savage engineers redesigned the operation of the rifle to account for the pressure differences. This video explains the problem and how the company addressed it:

Currently,Â Volquartsen sells the semi-auto TF rifle in 17 HMR. According to theÂ Volquartsen website, the rifle uses a counterweight system to handle the pressure and bolt velocity.

Alexander Arms also builds a semi-auto 17 HMR gun. The AAR-17 is an AR-style rifle that was built from the ground up around the cartridge.

The problem with both theÂ Volquartsen and the Alexander Arms rifles is the price. TheÂ Volquartsen carries a retail price of $1,200Â while AA is asking $1,210 for theirs. While both of these guns are exceptional rifles, most consumers will find the Savage Arms A17’s street price much more palatable: around $400.

Just weeks before the 2016 SHOT Show, information about two new A17 rifles have leaked from Savage Arms. Both rifles have wood laminate stocks that are gray in color. One of the two is a thumbhole type stock, while the other is more traditional. As more details come out, I will make sure to update this page.

I found the remington ammo to extremely accurate with these guns. Mine at 70yds are is is touching bullet holes and I actually have a target that I put two bullets in 2 bullet holes. I hit 4 bulleyes in 1/2 circles on same target. This ammo is a little slower than cci but so much more accurate. This was a new gun, I shot 2 groups, first with cci,2nd with remington, cci was all spread out and remington made a hole in the paper…no doubt what I am staying with…