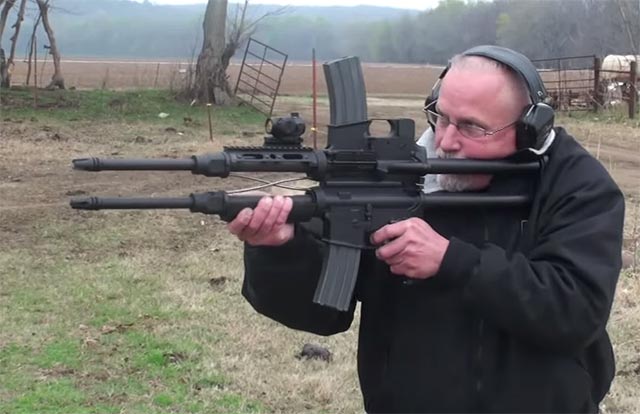 Looking for a good time? Tromix Lead Delivery Systems can usually deliver. The company is often experimenting with gun projects that just plain look fun. The latest creation is called the Siamese M16.

Make sure you check out the videos further down in this article.

Self-described as the “most insane creation by Tromix,” the rifle has the appearance of two AR15/M16 rifles attached via Picatinny rails on top of the upper receivers. However, there appears to be much more to this rifle system than a mounting adapter and some monofilament line. 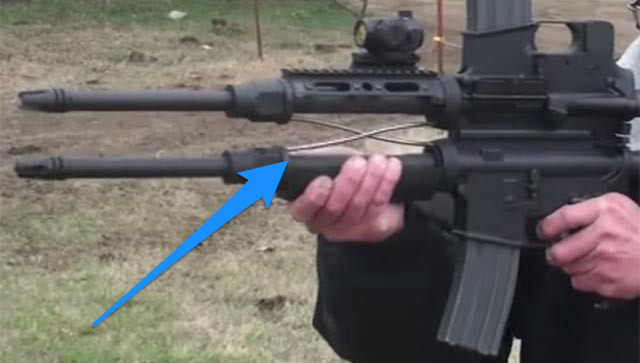 If you look closely at the area between the barrels, you will see the gas tubes criss-crossing between the guns. According to the Tromix web site, when the trigger is pulled on the lower portion of the gun, the round fires and the gas follows the tube to operate the top half of the gun.

When the top bolt cycles, the round is fired when the bolt closes. The gasses from that round then route down to the lower half of the rifle and cycles the bolt. So, at a very fast rate, the gun fires from alternate barrels: first theÂ lower barrel, then the upper. This repeats as long as the trigger is pulled and ammunition is available.

The short video below shows the gun being fired. There appears to be little muzzle rise suggesting that the two halves may be tuned in such a way as to cancel most of the rise.

In case anyone is wondering, the optic in the video is offset mounted – the upper mag is not obstructing its view. You can get a better view of the optic (and gun) in this video:

Tromix has made a variety of interesting guns like a bolt action AR pistol, a necked-up AK round (.338×39) and an AR15 chambered in .32 ACP. However, Tromix is probably most known for their work on the .458 SOCOM round. Check out their guns by clicking here to get to their website.

can you stop it once you started shooting or does it run to the end of the mag?

Just let off the trigger to stop firing. It runs the same as any full auto gun – just with two shots per cycle instead of the one.

But if either fails they both fail.

This one looks like it’s oiled with liberal tears! I love it!