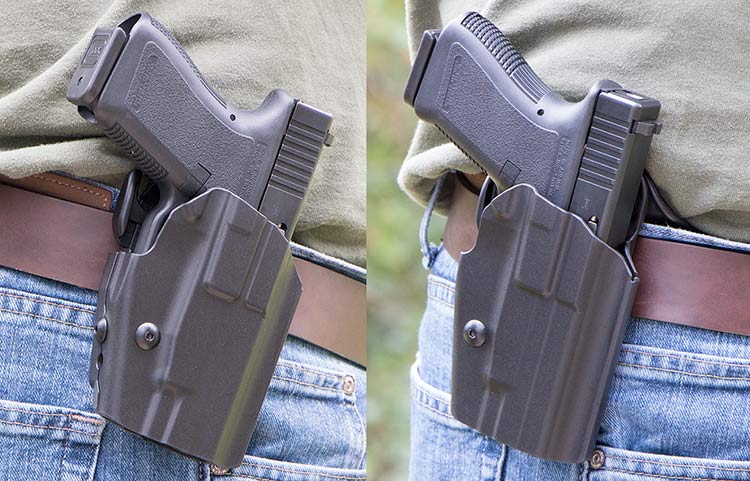 A giant box of unused holsters. That’s what a lot of people have in their garage or basement. Rigs in leather, Kydex and soft nylon that didn’t quite fit or maybe did not hold the gun well enough to be used. Some of them were tossed aside because they simply were not comfortable.

What if there was a holster that was lightweight, affordable and comfortable plus had the benefit of a retention system that automatically disengaged when you drew the gun? What if you could also make that rig custom fit more than 100 different pistols?

Safariland thinks they have just the ticket. It is called the Model 578 GLS Pro-Fit holster.

I had a chance to see the 578 for the first time at the 2015 SHOT Show. Safariland had a special event to introduce the new holsters and was kind enough to extend me an invitation. As an attendee, I got a chance to work with the rigs, talk to the designer and bring one home for testing.

In the most general terms, the 578 Pro-Fit is an open top holster that uses an active retention system to secure the handgun in the rig. Probably its biggest feature is the ability to use many different pistols in one holster. This holster comes in four different lengths, and between them they fit nearly 200 different guns. 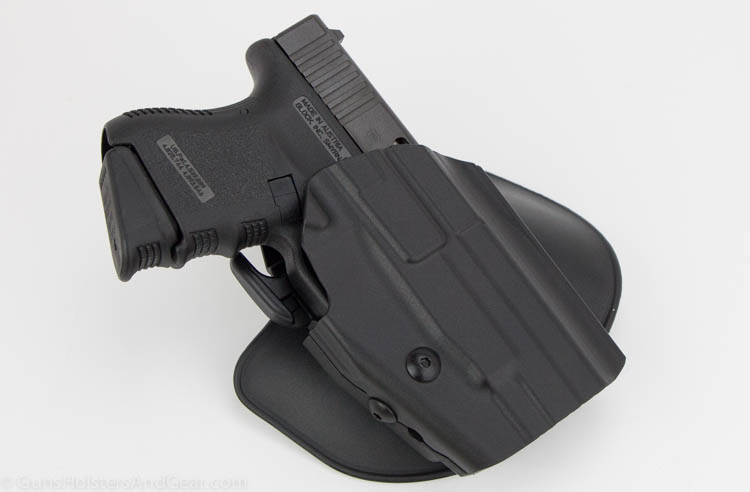 Bill Rogers is the designer of this holster, and he was on hand at the introduction. If you don’t know who Rogers is, he is a long-time trainer and holster designer. He created his own holster shop in the 70’s and was the first to make Kydex holsters.

After developing a number of great designs and creating a leather/Kydex laminating process, he was bought out by Safariland. He’s been designing holsters for them ever since. A former FBI agent, the Rogers designed 070 SSIII duty holster has probably saved as many cop lives as DuPont’s Kevlar.

According to Rogers, the 578 is not designed to be a security holster and it is not rated according to the Safariland retention level system. However, he stated that the system is very secure and was designed with the plainclothes officer and concealed carry practitionerÂ in mind.

Using something called GLS, or the Grip Lock System, Safariland is able to offer exceptional weapon retention without requiring any fancy moves, levers or snaps. Just obtaining a good shooting grip will naturally disengage the locking device. More of this is covered in the retention section below. 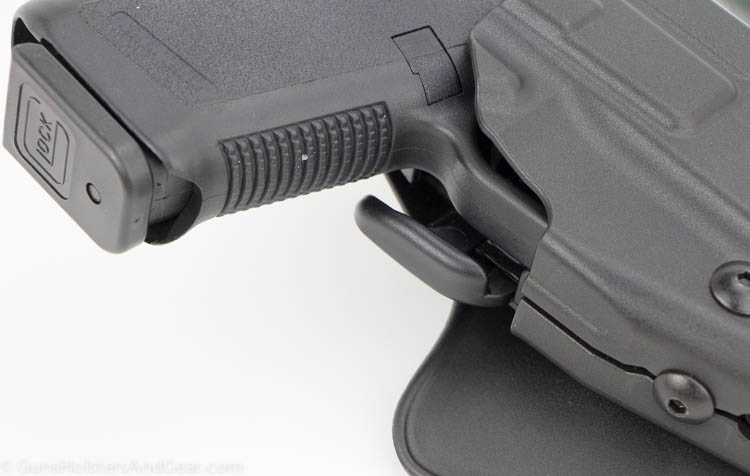 Safariland uses the same polymer to make this holster as they use in the popular 7TS line of rigs. This polymer is a proprietary DuPont blend of nylon called SafariSeven. One of the key features about SafariSeven is that it does not need aÂ glass fill to give it durability and rigidity. The result is a rig that will not mar the finish of your gun.

Don’t worry about the strength of the SafariSeven. The 7TS line that also uses this polymer hasÂ already proved reliable for use in duty holsters, tactical rigs and concealment holsters. It was clear from listening to Rogers that he is a real fan of this material for holster use.

Two attachment systems are included with these holsters: paddle and belt loop. The Safariland paddle system is extremely secure and works much better than any other paddle system I have tried. Rogers is a very strong proponent of the paddle and states it is a very secure way for anyone to carry a pistol. 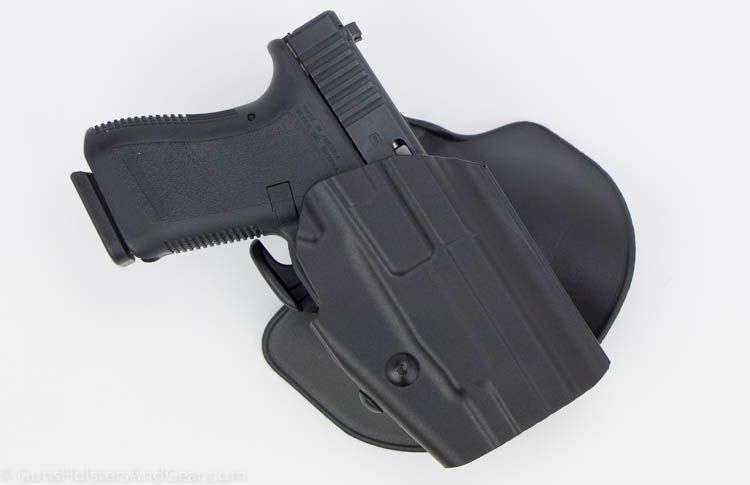 However, if you prefer belt loops to attach your holster to your body, Safariland includes the mount to do that. A couple of minutes with a screwdriver is all that’s needed to make the swap. The belt loop attachment is adjustable for cant and can be configured for cross draw carry.

The suggested retail price of these holsters is $55. I expect the street price to be less than $50, which will make them very price competitive with other rigs on the market. Right now, the holsters are listed on the Safariland site, but they have not yet appeared on some of the major sales sites like Amazon. They should be there in the next few weeks.

If the Holster Fits…

As mentioned above, one of the key features of the 578 is that each holster can accommodate a wide variety of handgun models. There are only four different versions of this Safariland holster that are based on barrel length. Among the four ofÂ them, more than 100 different pistols will fit perfectly. At the time of this writing, Safariland lists 177 different guns that will fit in these holsters. Here’s how it works… 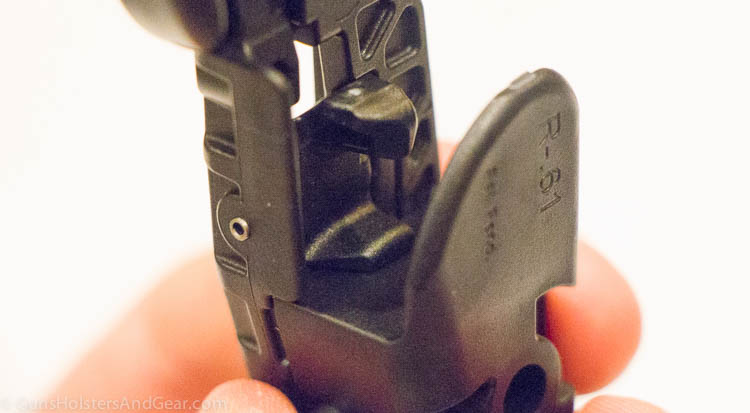 The holster is essentially a shell with two halves. Inside is a simple – yet very strong – rocking hook that latches onto the trigger guard. When a gun is inserted, part of this hook latches onto the pistol. When drawn, the hook rotates out of the way. 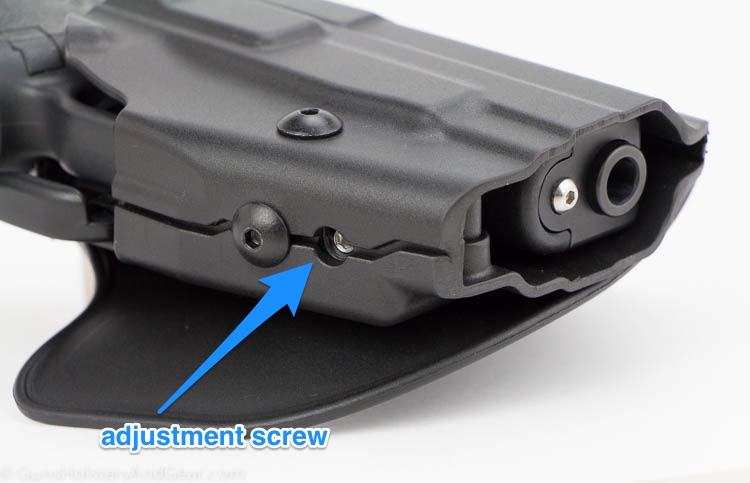 You can finely adjust the tension screw to find the perfect spot for your needs. However, I found that gross adjustments were all I needed to make the rig work with my guns.

In this video, Rogers talks about the holster and how it works:

Note that in the above video, Rogers describes the holsters as third generation designs. The third gen does not have exposed button head screws. My holster does have the exposed screws and is considered a second generation design. Other than a cosmetic difference, I do not know of any functional difference between the two designs.

I’m pretty fortunate and have a few different pistols to try in the holster. Grabbing some common pistols, I was able to fit the holster to a: 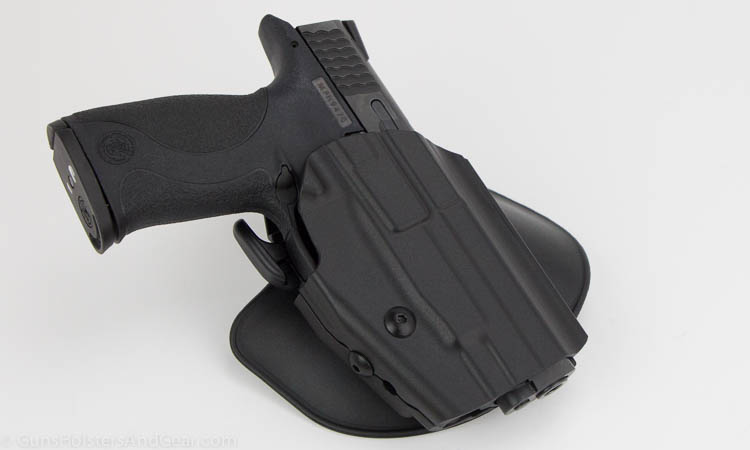 One gun that I could not get to work was the Smith & Wesson SD40. I was slightly surprised by this as most polymer pistols seem to work with this holster. Make sure you double check Safariland’s updated holster list before buying to ensure it will work with the guns you own.

As I mentioned before, this is not considered a retention-type duty holster. The retaining device should only be relied upon asÂ a way to keep the gun locked in the holster during regular wear.

The Grip Lock System does provide a measure of security against a gun grab. As long as the the device is not activated, the gun will not come out of the holster.Â With a Glock 19 secured in the holster, I had someone pull and tug at the gun. I was literally pulled around, but the gun remained in the holster.

However, if the GLS was activated by the person pulling on the gun, it would come right out. Keep in mind that this is the way it is designed. The 578 is a concealment holster – not a duty holster. Your primary defense against an unexpected weapon grab is concealment.

What I discovered is that a one hand grab from the front was not likely to pull the gun free. Because of the natural hand positioning, it seemed that the GLS was not activated in this way. However, if a two-hand grab was made, the GLS was activated and the gun slipped free.

I strongly suggest that you train with whatever holster you carry. All holsters can have the guns snatched out of them, including this one. Knowing how they can be defeated is the first step to preventing a successful gun grab.

Typically, I prefer to use a holster that attaches to my belt with loops of some nature. However, with Safariland products, I am comfortable using their paddle system. The paddle is very wide and really pulls the gun in tight to the body. Also, the back of the holster has a big tooth that digs in under the belt to secure it.

When doing the pull tests I outline above, the paddle held the rig without coming loose. It will move, but how much it moves is largely dependent on the kind of belt you use. A stiff belt designed for holster wear will rigidly hold the rig in place, while an inexpensive belt from Walmart will not.

As I said earlier, Rogers is a strong supporter of the paddle system. Combined with my own tests, I am comfortable in recommending it as a viable choice for anyone considering it.Â In this video, Rogers shows how to put on and take off a Safariland paddle holster:

I really like the 578 Pro-Fit holster. It is comfortable to wear and fits a wide range of popular handguns. The retention is excellent and serves as a degree of resistance to a gun grab.

The fact that this holster is so inexpensive makes it a really great value. I easily gave this rig a four star rating. If it offered level II retention at the same or similar price point, it would be a clear five star winner.

If you are looking for an outside the waistband holster, I recommend you check this one out. I enjoyed reviewing it, and it will be my new OWB rig for many situations.

If you are still needing a holster, but this one isn’t doing it for you, check out my list of Glock 19 concealed carry rigs here.

As with all of my reviews, I feel it is important to let you know of any possible biases and influences in the article. This way you have the best information possible to help you make a buying decision.

First, no monies or other compensation was given or offered for me to write this review.

Second, this is the second article I’ve written about the 578. The first was for Guns & Weapons for Law Enforcement magazine. That article was a short introduction to the holster and not a full review. Regardless, the information and conclusions are the same though the writing and audience are different.

Third, Safariland did provide the sample holster free of charge. As mentioned in the article, I attended a special media introduction to the holster while at the SHOT Show. Bill Rogers demonstrated the rigs and everyone was given a bag with the holsters and informational materials on them.

Fourth, Safarliand is not an advertiser, nor am I in any talks with them to be one on this or any publication I own. Their ads may appear in the Google ads that run on this site, but those are independently served by Google and I do not control them. I do not know if Safariland uses Google for advertising.

If you’ve got any questions about any of this, leave a comment in the section below.

Thanks for the list. I hope I didn’t miss it, I was looking for a holster that will fit the HK vp40 with a light mounted. Thanks in advance for any help finding one.

I have an HK VP9 with a barrel weight from HK Parts. Do you suspect that one of the larger versions of this holster will work for that setup?