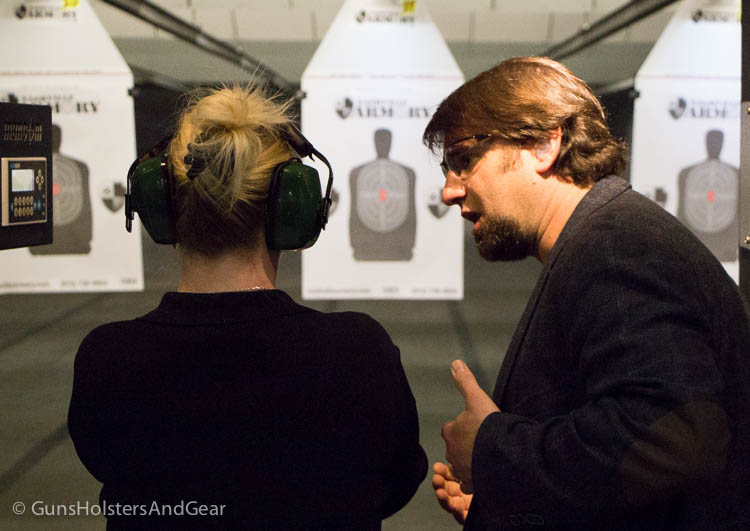 You probably donâ€™t know Donna, but you should. She is the reason behind the new Glock 43. Donna, and millions like her.

The latest micro-9 was not developed for Donna because she is a woman, though the gun works perfectly well for her as a woman.

You see, Donna is a caterer based in Nashville. She did not grow up with a father teaching her how to shoot guns, nor has anyone else in her life taken her to the range. Yet, one of her clients is Nashville Armory, the host of the official launch party of the Glock 43 pistol. Thatâ€™s where I met Donna. 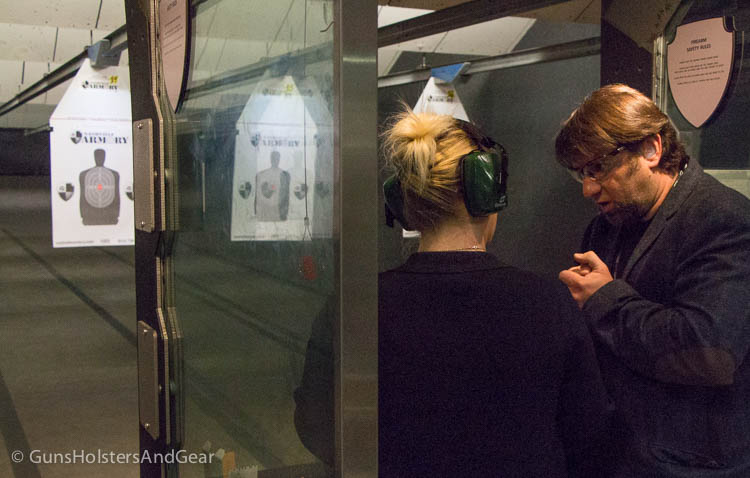 At the launch party, gun writers scrambled for a chance to shoot the new pistol and jostled one another for space around the buffet table. Firearms trainer Paul Carlson instead struck up a conversation with Donna about the new pistol. 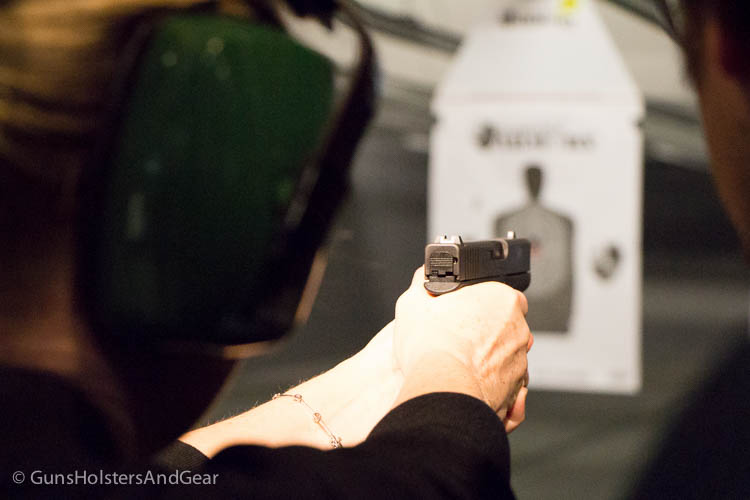 After discovering that Donna had never shot a gun before, Paul sought and received permission from Glock to pull her from her culinary duties and take her on the range. The experience and feedback Donna provided illustrated the exact reason why the Austrian pistol maker created the G43.

After taking care of some administrative issues, Paul walked Donna through the basic handling of the pistol. According to Donna, Paul established a level of comfort with shooting that no one else had ever done. Under Paulâ€™s close watch, Donna began pulling the trigger and fired her first shots. 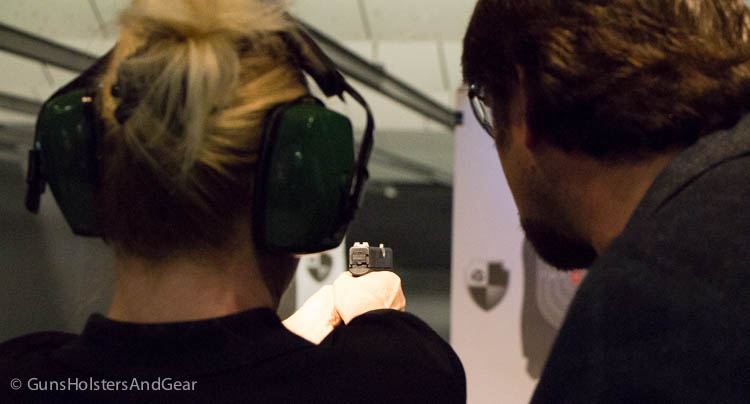 Donnaâ€™s grin was as wide as it was infectious. Seeing Donnaâ€™s fears about shooting wash away while a sense of accomplishment and empowerment swept in like an unstoppable tide was truly inspiring.

After we were off the range and the adrenaline rush had subsided, Donna made a number of observations about the gun and her first shooting experience. 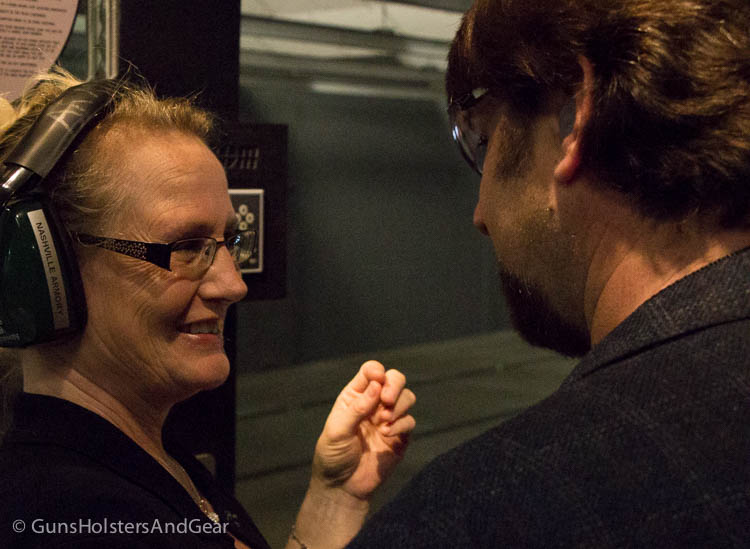 Donna credited Paulâ€™s ability to build rapport with her and put her at ease with her willingness to try shooting. While it was apparent that Donna had previous opportunities to shoot with otherwise qualified instructors, it was only because Paul made her comfortable that she was willing to give it a go. This should be a critical lesson to both instructors and gun manufacturers who want to put pistols in the hands of new shooters.

About the pistol itself, Donna thought the fit of the gun was nearly perfect. Though she said she might like the gun slightly thinner, Donna stated the gun fit her hand better than any other pistol she had ever handled. She said she had enough room for both of her hands on the gun, and â€œit wasnâ€™t too fat.â€

Gunwriters often talk about the recoil associated with compact pistols. As a new shooter, Donna felt that the recoil â€œwasnâ€™t a lot.â€

When all was said and done, Donna said â€œ[I] loved it.â€ She went on to say that because she was comfortable, and because the gun was comfortable to shoot, she would definitely buy the Glock 43. 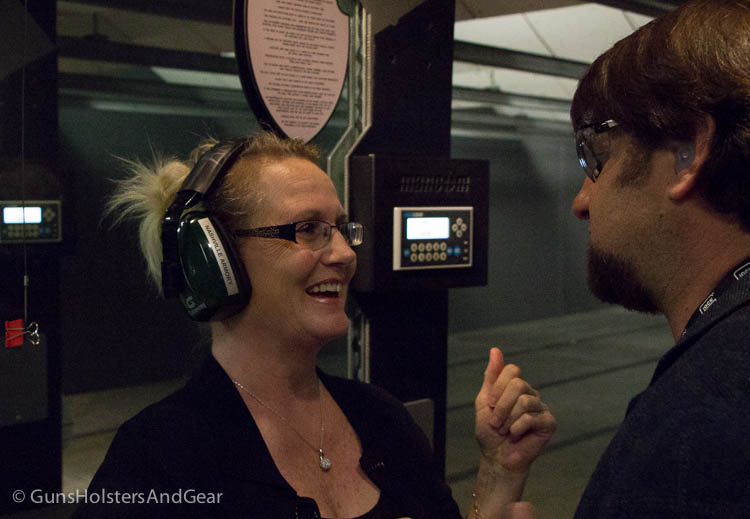 Gun companies have realized that women make a significant portion of the shooting market. In the scramble to cater to this classically underserved market segment, many companies have turned to paint schemes to make guns that appeal to the female shooter.

Speaking with Kie Wagner of Glock, it became clear that Donna makes the perfect avatar for the creation of the new 9mm pistol. Instead of focusing on gender and superficial characteristics, Glockâ€™s design team is more interested in how the gun fits into a shooterâ€™s hand.

If the shooter is a woman or a man is not a question that Glock considers important. The critical question, and the one the company is focused on, is making a pistol that will properly fit the hands of the shooting public. The Glock 43 satisfies that too-often overlooked question for those with small hands. 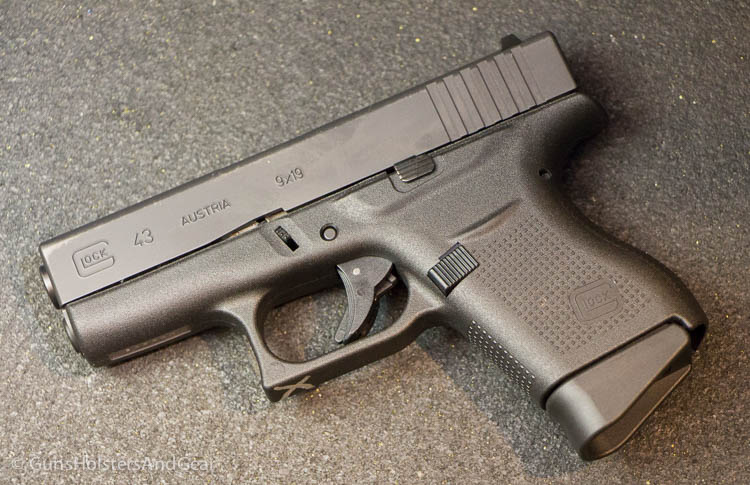 I do know that the gun fits Donna, and perhaps millions of others just like her. She said the gun fit her hand very well, and as a novice shooter, Donna was not intimidated by the gunâ€™s recoil. In fact, after shooting the G43, Donna stated it was the gun she would likely buy.

If Donna is representative of many potential customers, Glock will sell as many Glock 43 pistols as they can possibly make.

Good for Paul Carlson! This is the kind of thing that all of us in the “gun culture” should be doing!

I should have added: Donna should be in a Glock ad! This is the kind of person we need to be attracting to our side!

I think the story is great. But it’s amazing that Glock is getting credit for listening to customers when they are the company that had ignored requests for a single stack .380 and 9mm for MANY years now. Don’t get me wrong, they make great products. But their innovation made them famous 20 years ago. They used to lead, now they follow.

There’s just no pleasing some people. When other manufacturers came out with single stack nines, people bashed Glock for not having one.
When Glock does bring one to market, they get bashed for not doing it sooner.

Some people just love to complain.

Don’t love to complain. Reread my comment. I said “don’t get me wrong, they make GREAT products.” The new single stacks are well made, I give them credit. But why is honesty so bad? They ignored their customers for a long time. Not an attack on them, just a fact. I was only pointing out how some people IGNORED all the single stacks just because Glock didn’t have one. That religious cultlike devotion to only one brand is scary.

I didn’t think you were complaining and agree 100% with what you said. So much so it’s as if I said it myself. Are we related? 😉

Yeah I didn’t read his comments as complaining.

To add… it’s as if you are complaining about what you thought was his “complaining”. 😉

I’m confused… This portrays Donna as a person that has never fired a gun before and is new to the “gun world”. Then it says “fit her hand better than any other pistol she had ever handled”. So what is it?

I think this will be a great seller for Glock, and I want all gun manufacturer to succeed. There are plenty of gun makers that are bringing well thought out products that are more than just flashy colors. Springfield, S&W, Taurus, etc… but just like one of the other comments here from Adam R, Glock is a bit late to the party.

I have never liked Glocks mainly due to all the “fan boys” and the Holy grail status they have always placed on Glocks. It’s the anti-establishment in me I guess. Another reason is due to the DAO triggers, I’m just not a fan of them. On any gun.

However when the .380 Glock came out, it perked my interest as a back up gun. This single stack 9mm looks kinda interesting as well… Maybe I’ll have to put aside my prejudices and take another look. Does that make me an fan boy now?

Sorry for the confusion. Donna’s first time firing any gun was recounted in this article. However, she has picked up and handled guns previously.

That’s what I thought, just wasn’t sure. Thank you.

As a male with small hands. I have never liked the Glocks. With a proper grip, my finger barely reaches the side of the trigger. I may like the 43 when I get to handle one, but my M&P 9c will hold twice as many rounds, and fits me perfectly. I will wait and see if it is worth the price and “maybe” is a little more concealable.