Trijicon announced the introduction of the MRO: Miniature Rifle Optic. The new Trijicon MRO is a non-magnifying red dot-type optic that is lightweight and compact. (Ed. note: Read my MRO review here.)

According to the company, the MRO significantly reduces the tube effect sometimes found with other optics. Trijicon states they managed to overcome this by using a large objective lens (25mm) and keeping the optic length to a minimum. Trijicon advises the sight is parallax free and has an infinite eye relief.

The MRO uses a 2 MOA red dot with eight brightness settings. Two of the settings are compatible with night vision gear. A third setting is designed to be exceptionally bright for full sunlight conditions. I’d imagine this will be easy to pick up when wearing dark sunglasses or goggles.

On top of the MRO is a click knob that controls the brightness levels. It can be operated with either hand, and can be manipulated without losing your grip on the gun. Illumination is handled by a single 2032 battery that gives five years of continuous use.

Trijicon built in 70 MOA of adjustments in 0.5 MOA increments. Adjustments can be dialed in with the rim of a 5.56 NATO case if a screwdriver or other tool is not handy. 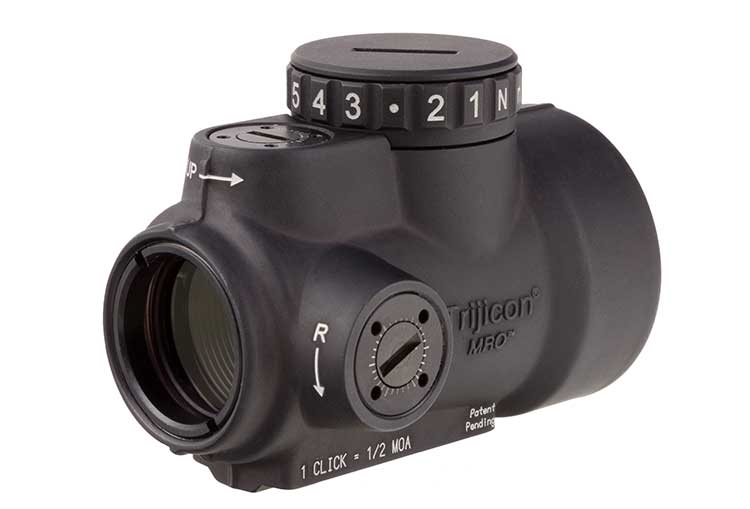 The size of the unit looks to be slightly smaller than the Bushnell TRS-25, though I would expect that the Trijicon is a much more rugged design. While the Bushnell works great for a range toy or even home defense gun, for a police officer or combat soldier, I’d spend my money on the MRO without thinking twice.

This optic should compare well to the Aimpoint Micro T-2, which is also a rugged 2 MOA red dot. However, the pricing on the Trijicon unit looks to be several hundred dollars cheaper than the Aimpoint option.

According to the company, the Trijicon MRO has been tested to some fairly exacting standards. The optic body is made of 7075-T6 aluminum, and the optic has the following specs:

Many people are familiar with the Trijicon name due to the company’s success with night sights and the ACOG rifle sight. Recently, the company has seen a lot of success with its RMR sight that is suitable for both pistols and rifles.