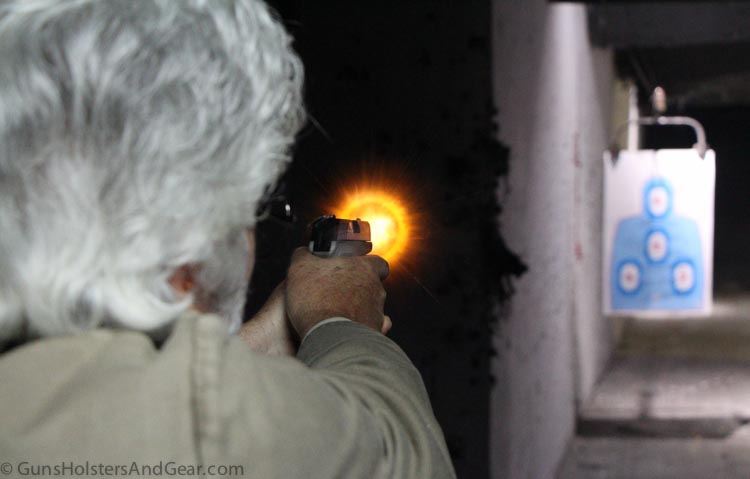 SCCY will officially announce a new .380 ACP pistol at the 2015 NASGW Expo & Annual Meeting. Called the CPX-3, the new handgun will be slightly smaller than the existing CPX-1 and -2 pistols with some upgrades that make it the best shooting gun in the company’s current line-up.

As many of you know, I am a regular contributor to several of the gun magazines produced by Harris Publications. SCCY invited several Harris Publications writers to the company’s factory in Daytona Beach, FL for a tour and early look at a new pistol. I was one of those writers.

While at the factory, I had a chance to meet and spend time with Wayne Holt, the president of SCCY, and Joe Roebuck, the company’s founder and CEO.

The CPX-3 is a new gun that looks similar to the existing pistols from the company but incorporates things like a lighter trigger and a new action. These are hammer-fired pistols, with the hammer concealed in the slide so that it will not snag on clothing, etc. 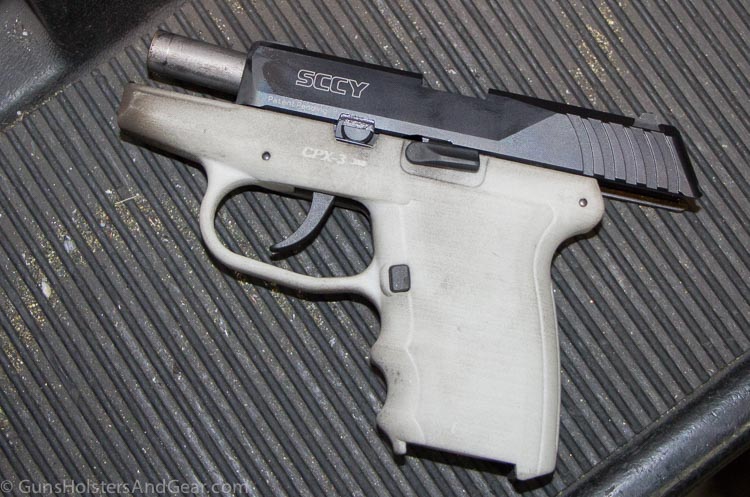 As stated above, the gun is slightly smaller than the existing 9mm pistols, but it is not what I would call a subcompact pistol.Â According to SCCY, the company did not want to release a handgun so small that it would be abusive to the shooter or difficult to operate. As a guy who’s shot a lot of handguns over the years, I can attest to the fact that tiny .380 pistols can be a pain to shoot. Sure, a Ruger LCP can be hidden virtually anywhere, but you sacrifice accuracy, capacity and controllability to get there.

Since the company was not focused on shrinking the CPX-3 to a tiny footprint, the gun has a relatively high capacity for a .380 ACP handgun: 10+1 rounds. This is the same capacity as the 9mm CPX-1 and -2.

These new handguns will not have the external safety lever found on the CPX-1 pistols. While market demands can certainly convince the company otherwise, there are no immediate plans to introduce a thumb safety version of the gun.

Other guns in the company’s line are offered in a range of colors. However, the initial models of CPX-3 will be offered with a black frame only. As time goes on, I would expect these pistols will have the same frame color choices that the other guns currently have.

Sights are a 3-dot pattern similar to what the existing SCCY guns use.

Roebuck designed a new system called the Roebuck Quad Lock System. A simplified explanationÂ is the system uses the tension on the rear of the barrel to press the front of the barrel into a V-channel. This eliminates virtually all barrel wiggle that is common on most, non-fixed barrel pistols. The theoreticalÂ result is a gunÂ that is more accurate, but still operates for the user like a typical locked breech pistol. 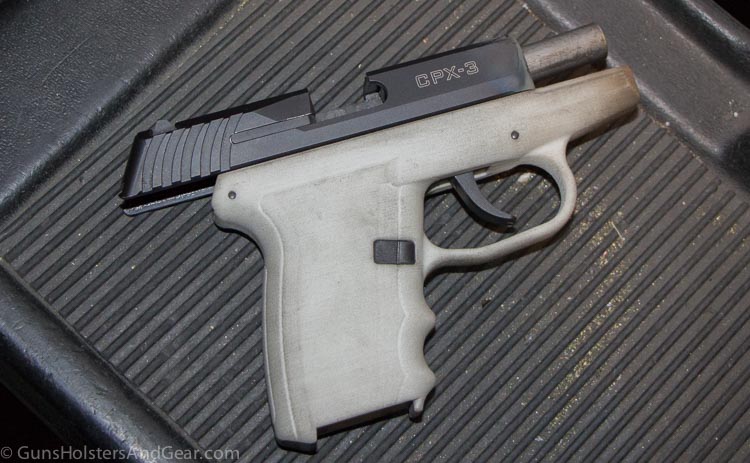 Due to the way the system works, the slide is very easy to manipulate. The prior SCCY pistols use a heavy recoil spring that can be difficult for novice and weak shooters to manipulate. The CPX-3 is completely different. Gone is the heavy pull, and it is replaced by a smooth, light ride on the rails. For this reason alone, the CPX-3 is a significant improvement over prior models.

I went with the SCCY crew to the nearby Hotshot Indoor Range for a chance to shoot the new pistol. SCCY brought two of the CPX-3 prototype pistols that they had been running for several months to test the design’s reliability and endurance.

SCCY employees encouraged us to shoot the guns as much as possible, and they were not stingy with the ammunition. When the other shooters and I seemed done, they nearly begged us to shoot more.Â They were certainly not afraid of us running the guns hard.

I found the CPX-3 to be very easy shooting. The grip was large enough that I could wrap both hands around the pistol and easily control recoil. For me, the gun pointed well with the sights in nearly perfect alignment the first time I brought the pistol up into my line of vision. 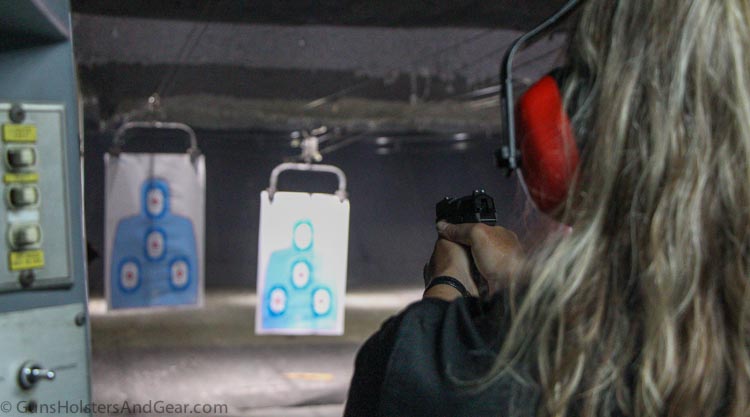 The CPX-3 had a long, smooth trigger pull. While the pull was longer than I liked, I could feel no stacking and the pull seemed to be very consistent. Compared to a CPX-1 or -2 pistol, the trigger on this gun was noticeably lighter. I was told by a SCCY employee that the CPX-3 trigger pull ran about 6-7 pounds while the pull of the original guns was several pounds heavier.

One of the things I did not like about the trigger is that you have to let the trigger ride all the way forward before you can shoot again. As the gun does not have a strong trigger return spring to forcibly push the trigger back to the forward position, it is possible to short-stroke the trigger during rapid fire.

This did happen to me once during the shooting. In fairness, I’ve experienced the same thing with other handguns such as the Ruger LCR. I prefer the harder push, like that on Smith & Wesson revolvers, to return the trigger to the fully extended position if itÂ requires a full ride before the gun will fire again.

Excluding the short stroke, which is a shooter error, I only observed one malfunction with the guns. Another writer had a stovepipe malfunction on the last round in a string of shots. I can’t say what caused the error, but the shooter was very experienced and I don’t think it was a limp wrist induced error.

Accuracy seemed very good. All of my shots went where I aimed, and none of the writers seemed to have any problems placing rounds on target.Â Several of us made impressively small groups with the guns in the 7-15 yard range. It will be interesting to get a production gun and see exactly how accurate these pistols can be.

I want to be very clear: the guns we shot were pre-production pistols. I am not going to give the new SCCY CPX-3 a recommendation until I shoot a production gun and am convinced of its reliability. However, I did like the guns and suggest that you shoot one once they hit the market.

The new pistol promisesÂ a number of advantages that you may not find in other concealed carry guns. Considering how affordable the SCCY pistols are, the new CPX-3 may be one of the best buys on the market when it starts shipping.

As with my product reviews, I am disclosing all potential biases related to the preview of the CPX-3. This allows you to critically evaluate my statements and determine what information is most helpful to you.

SCCY invited me as a writer for Harris Publications to visit the company’s factory as described above. SCCY paid for a room at a hotel for a single night, plus bought me lunch. I paid for my own transportation costs. The company also gave me an embroidered SCCY polo shirt and some other nice knick-knacks with an estimated total value of $50 or less.

All of the SCCY officers and staff were friendly and seemed to be very honest and candid about the company’s products and development. No one requested or suggested I write about the company, much less do so in a positive light. No monies or other items of value (not described above) were exchanged or offered.

I do not have any investment or other interest in SCCY or any other product mentioned in this article. If you are interested in other SCCY pistols, check out my article SCCY DVG-1: Striker-Fired 9mm Pistol.

This is a hoax. I’ve yet to see this gun at a single gun shop or show.

Simply want to know the msrp price of the CPX-3 please.

I hope this helps!

What kind of ammo were you using? Good review btw, and I like how you handle man babies.

There was a mix of brands and types. I failed to take accurate notes on what kinds though. Sorry about that!