According to the company, the gun was designed for “those demanding a high-performance, short barrel rifle chambered in the versatile 300 Blackout cartridge.” As with all of the company’s rifles, the new 300S looks good and sounds like it will be a solid performer.

At the heart of the build is the 10.3″ barrel with a Strength-to-Weight (S2W) profile barrel. The S2W barrel is essentially a heavy barrel with a different taper than frequently seen with other AR-style barrels (Gov’t profile, etc.) The photo below is of the Daniel Defense 10.3″ 300 BLK barrel that is sold on the company’s website. I would expect that this is the same barrel used on the 300S.

Much of the rifle is pretty standard fare for a Daniel Defense rifle. That is to say it is well built and uses mostlyÂ the company’s own parts to finish out the package.

Both the upper and lower are machined 7075-T6 aluminum with a Type III hard coat anodized finish. The lower has a rear QD attachment point for a sling. The upper is equipped with M4 feed ramps.

For a hand guard, Daniel Defense uses a 9″ quad rail. The rail is machined 6061-T6 aluminum and has a Type III hard coat anodized finish like the receivers. Santoprene rail covers also ship with the rifle. These offer a soft surface for the hand that improves grip on the rifle and are heat resistant. 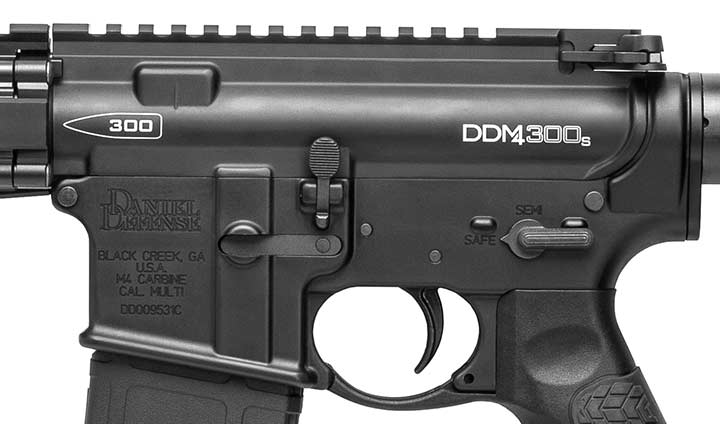 While the quad Picatinny rail system is fairly ubiquitous, I am now at a point where I would much prefer a KeyMod or M-LOK hand guard to further reduce both weight and bulk. I suppose if I had any complaints about this gun, this would be it.

A Daniel Defense adjustable buttstock is standard on the rifle. So is the company’s own pistol grip and flash hider.

No sights ship with the rifle. Since many shooters have strong preferences in this regard, I don’t see this as an issue. I’d likely mount a Trijicon MRO on the gun with some type of lightweight folding sights as a backup. The Picatinny rail makes mounting easy for pretty much anything you would want to use.

Daniel Defense is taking orders on these guns now. Keep in mind that with the short barrel, NFA rules/paperwork has to be followed.Â The retail price is listed as $1,749. Additional gear or options will have an associated cost increase.

If you grab one of these, please leave a note in the comments section and let us know how it runs.