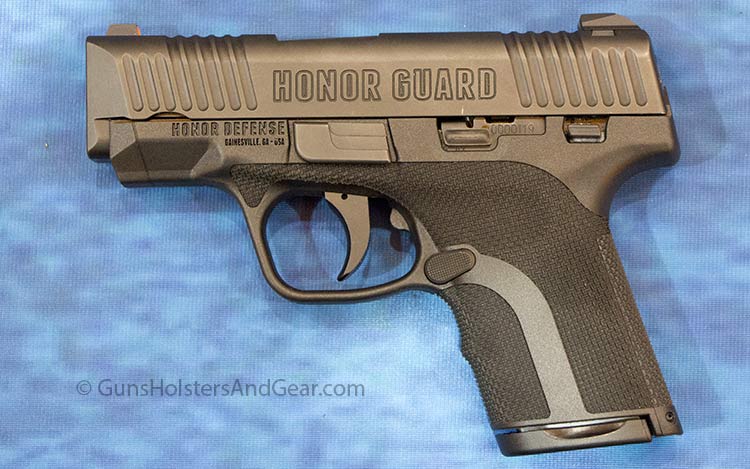 After discovering Honor Defense would be showing the new Honor Guard pistols at the NASGW Expo, I was eager to to arrive and check out the new guns. I have a great deal of appreciation for thin 9mm pistols designed for self defense. A brand new design like the Honor Guard will always catch my attention.

At the Honor Defense booth, I got the chance to spend some time with Adam Walker, the Director of Engineering for the company. Walker was very generous with his time and gave me a lot of insight into the pistols.

I’ll start with the basics. The Honor Defense pistols are 9mm striker-fired handguns with a polymer frame. The model many people are familiar with is the 3.2″ compact version. However, the company is also making a 3.8″ version of the gun that was on hand at the show. 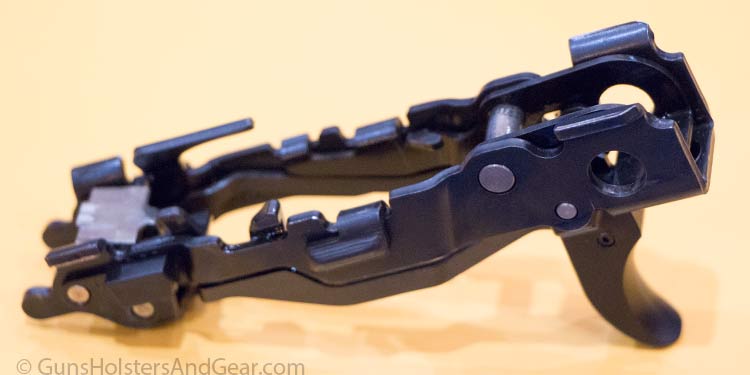 The pistols use a removable chassis system that is similar to the SIG P320 and Beretta Pico. Walker, in a very polite way, suggested that the Honor Guard design was less complicated than the SIG type chassis, and much stronger than the Beretta.

Walker stated the development of the chassis system was a function of manufacturing convenience, but the company may sell accessory frames for owners in the future if it makes business sense.

Regarding the frames, the Honor Guard pistols have a swappable backstrap to fit small and large hands. The texture on the frame is aggressive, but not uncomfortable at all.

The magazine release is ambidextrous. Versions of the gun will be sold with and without manual safeties.

Honor Defense elected to take the slide serrations over the top of the gun, giving the pistol a semi-custom look. The sights used on the gun are designed specifically for the pistol, but use Glock 42/43 type bases. So, if you dislike the factory sights, just grab any for one of the single stack Glock pistols and get them installed. 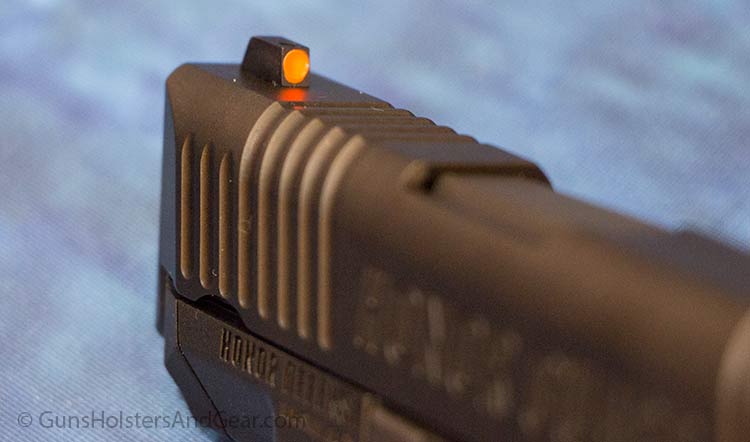 On the Honor Guard, the standard sights are actually pretty good. The front sight is a bright orange – something that is easy to see and contrasts with the natural environment. For fast sight acquisition, this can help a lot. 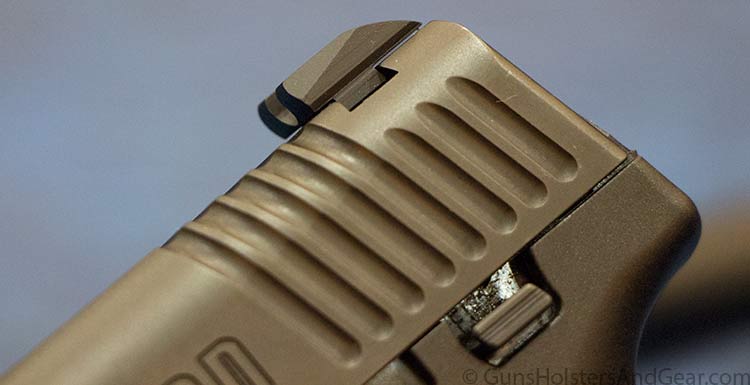 The rear sight is sloped on the side that faces the shooter. However, the leading edge has a slight hook to help run the slide with only one hand. I wish all rear sights on defensive handguns did this.

Take down of the pistol is quick and easy. The internal components – excluding the removable chassis – all look similar to what you might find in another modern handgun. 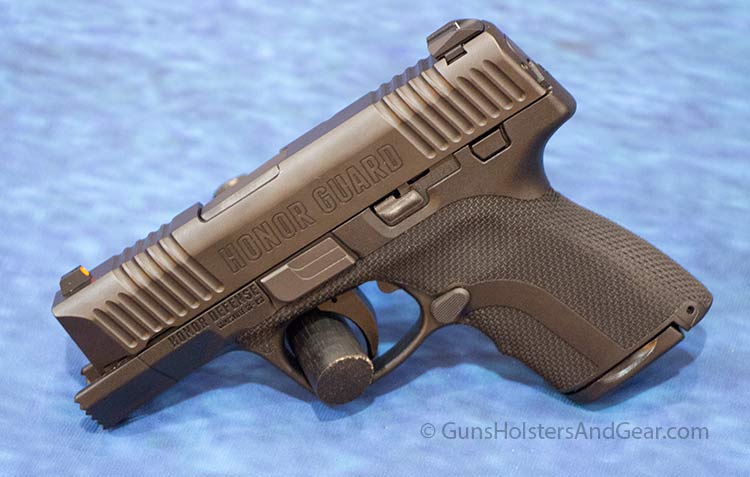 One version of the pistol has a standoff frame. This is intended to prevent the gun being pushed out of battery (and not firing) when in a situation where a contact shot is required.

If you take a standard pistol and jam it in an attacker’s ribs, there is a fair chance that the gun will not fire as the slide is slightly pushed back. The stand off prevents this. 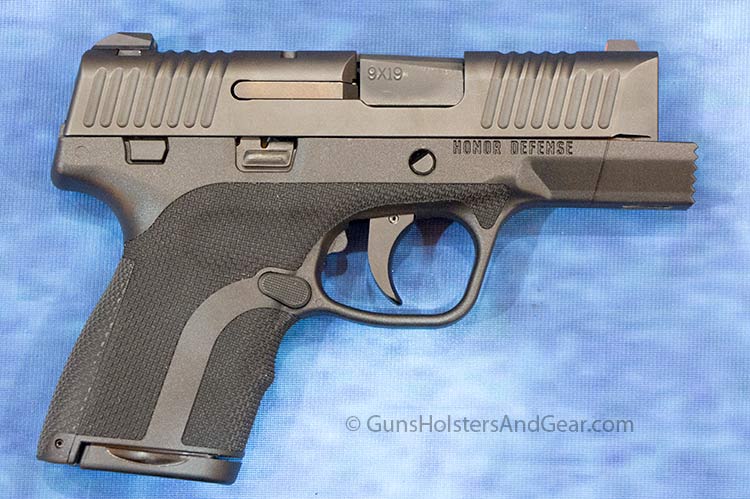 Honor Defense had the long slide version of the gun on hand. This version sports a 3.8″ barrel but retains the same compact frame. This allows a shooter to maintain a high degree of concealability while adding the benefits of increased bullet velocity and a longer sight radius. In a way, this is like the XD-S 4.0 pistol.

I am slated to receive one of the production pistols once they begin shipping. Make sure you watch for that review coming soon.

I’m not sure, but if I were a betting man, I’d put money on Honor Defense having a few interesting announcements at the 2016 SHOT Show. Maybe something about frames in various colors or other options like a frame with a built in light.

Honor Guard pistols are now shipping to distributors and dealers. You should be able to find them in some gun shops. If your local dealer is not carrying them, he or she should still be able to order one for you. If not, try GunBroker.

Getting a new pistol on the “approved” list at a law enforcement agency can be extremely difficult. Most departments have a rigorous process that guns have to be put through before being added to the roster.

Honor Defense announced in early May 2016 that the Santa Cruz County (CA) District Attorney’s Office has approved the guns for backup duties. The D.A.’s Office employees sworn investigators that require the carrying of arms. The agency’s Firearms Training Unit (FTU) put the guns through a series of reliability and accuracy tests and determined the guns were ready for duty carry.

Among the positive aspects of the gunÂ cited by the FTU were:

It will be interesting to see if additional departments test these guns as well.

The gun looks amazing, Many stores do not have it as a rental, you as an introductory price match the Shield though it seems much better, I think this will help generate additional interest.