O.F. Mossberg & Sons is the latest manufacturer to jump into the deep end of the pool with NFA weapons. We’ve seen other major companies like Ruger start selling suppressors, and now Mossberg is offering 12 gauge AOWs.

There are two AOWs being offered by Mossberg: the 590A1 Compact Cruiser AOW and the 500 Compact Cruiser AOW. As the names suggest these two weapons are based on the very popular 500 and 590A1 actions, and they are both chambered to run 12 gauge shells, but they are not shotguns. These are AOWs.

The AOW, or Any Other Weapon, is an odd classification in the National Firearms Act that acts in some ways as a “catch all” category. Whereas a short barrel rifle or a sound suppressor will set you back $200 for a tax stamp from the BATFE, the AOW category only requires an investment of $5 to the federal government. Yep, you still need to do the paperwork, and the tax is bogus anyway, but it is $195 cheaper than registering a short barrel shotgun.

This model is built on the darn near bulletproof 590A1 action with the same twin action bars and anti-jam elevator as the 590A1 shotguns. It has the ambidextrous safety mounted right on top for easy access.

This model has a 10.25″ long heavy wall barrel and runs 2.75″ and 3″ shells. A bead rests on the end for aiming. It uses a tubular magazine like the shotguns, and holds a total of 3+1 shells.

Overall, this AOW is 19.5″ long and weighs in at 5.3 pounds. Assuming you use full power defensive loads, I am guessing that there will be quite a bit of felt recoil and muzzle jump. However, Mossberg did a couple of things to try and mitigate these. 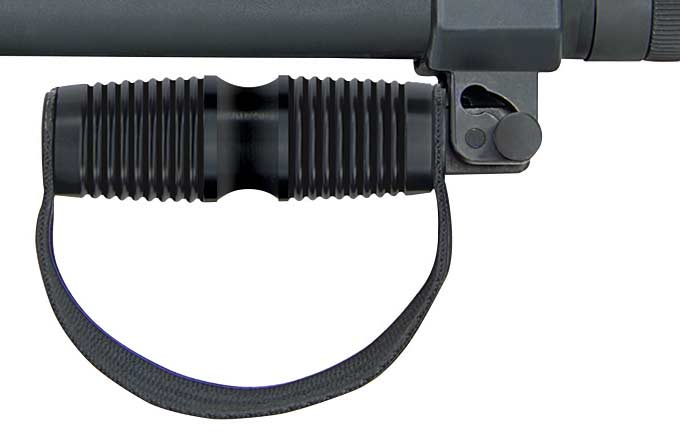 Up front, the company includes a folding vertical grip with a hand strap as a standard piece of equipment. I expect that the strap helps to keep the hand in control of the gun during recoil. For the pistol grip, Mossberg chose the ATI T3. This grip is supposed to help absorb recoil and reduce any sting to the hand. I’m sure these feature help, but I still expect the recoil to be substantial.

If you thought the 590A1 AOW was handy, you might think this version is downright short. Mossberg chopped the barrel down to a mere 7.5″. This puts the OAL at 17″. I don’t know what the recoil in the longer gun feels like, but I bet it is even more exciting in this model.

The tube magazine has a correspondingly shorter length, dropping its capacity to two rounds. You can top it off with a third in the chamber. It also has a 3″ chamber.

As with the 590A1, the 500 Compact Cruiser AOW is Parkerized. Also like its slightly larger brother, the gun has the folding from grip and an ATI shock absorbing pistol grip. Total weight on this model is 4.9 pounds.

I applaud Mossberg for jumping into AOWs. Having a traditional firearms company selling AOWs helps normalize these weapons in the minds of shooters that might otherwise think these kinds of weapons should be restricted.

So what do you guys think? Is this something you would be interested in buying?

This seems perfect for those 2.1″ 12 gauge shells…