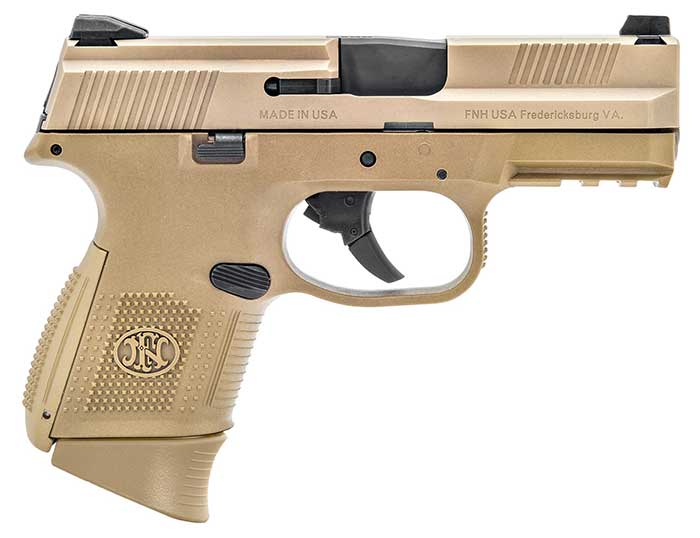 FN America is now selling a flat dark earth version of the FNS-9 Compact pistol. This announcement comes two months ahead of the 2017 SHOT Show, suggesting the company could be reserving a few big announcements for January.

For this pistol, FN America is using a polymer frame with a FDE color. The slide is then finished using a PVD process. The slide is said to be color matched, though in the provided photo (above) it looks more tan than FDE. Of course, in natural lighting, the colors may be much more similar.

Parts like the trigger, sights and controls are all black.

Other than the color, this FNS-9 Compact is identical to the existing models. It is a striker-fired pistol chambered in 9mm. Standard capacity magazines hold 12 rounds, and the guns can also feed from the larger capacity 17 round magazines used in the full size FNS-9 handguns. If you live in a state that doesn’t trust you with that many rounds, 10 round magazines are available as well.

The new guns will ship in a soft sided case. According to the company, the case is more space efficient and is far more discreet for transportation purposes. I do like a hard sided case, but I rarely use them for anything. A soft sided case is actually far more practical for my needs.

As many of you know, FN America is owned by FN Herstal S.A., makers of fine military weapons like the Minimi Mk3 LMG. FN Herstal is based in Belgium, but all of the FNS-9 pistols are made in the United States.

Pricing on the FDE version of the FNS-9 compact is unchanged from the original black gun at $599.00. That’s the suggested retail price; actual prices in a store may be much lower. According to the company, the guns are shipping to the distributors this month and should be on the shelves in December in plenty of time for Christmas.