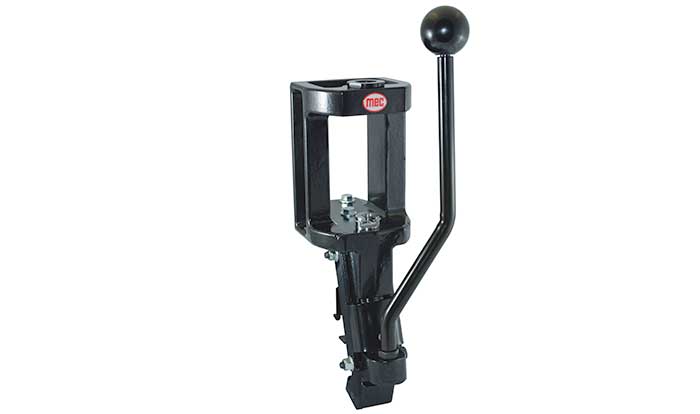 MEC is well known for its high quality shot shell reloading equipment, but has not really attacked the metallic reloading market.Â That seems to have changed.

Standard 7/8-14 threaded dies are used in this press, and it should be compatible withÂ any of the dies currently being made by Lee, Hornady and others.

Right now the pistol and rifle loading market is represented by several quality manufacturers including Hornady, RCBS, Lyman, Dillon and Lee. MEC is already established in the shotshell market, so it will be interesting to see if the company can gain a foot hold with metallic loaders. Competition is good for us consumers, so I hope MEC does well.

2 replies on “MEC Gets Into Metallic Reloading: The Marksman Press”

I’m liking this press. Like the Lee Classic Cast and Redding Big Boss 2, the MEC directs used primers down through the ram. The MEC design has a catch tray for the primers.

I’m looking forward to seeing one in person. I presume these will be at SHOT, so hopefully there if nowhere else.