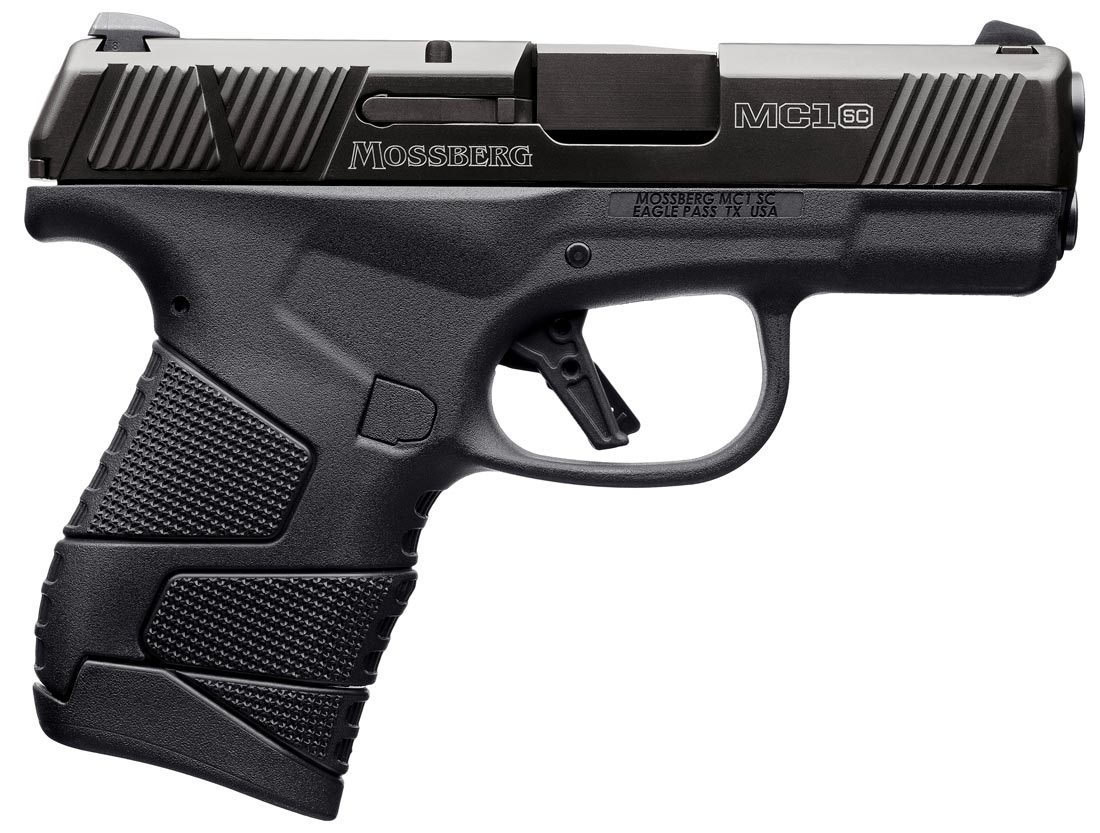 Ahead of the 2019 SHOT Show, Mossberg announced a new pistol: the MC1sc.

The Mossberg MC1sc is a subcompact 9mm handgun that is designed for the concealed carry and self-defense markets. It offers a range of features that make it worth considering.

One hundred years ago, O.F. Mossberg & Sons opened its doors and started selling firearms. The first gun it offered was a handgun called the Brownie – a .22 caliber pistol with four barrels that looked similar to, but operated differently from, some pepperbox pistols of the era.

Fast forward from 1919 to 2019 and Mossberg has become the 6th largest firearm manufacturer in the United States. Even though the company is better known for its shotguns and rifles, it returned to its handgun roots with the new MC1sc pistol.

The MC1sc is a striker-fired, polymer-framed handgun that is an obvious candidate for concealed carry duty. Three years of development and testing suggest the engineers have had ample opportunity to work all of the bugs out of the new design.

Shooters may wonder if the “sc” in the name stand for “subcompact.” It does. Using this naming convention makes one wonder what else may be in the pipeline. Also, this gun is chambered in 9mm only. Other caliber options may also be in the works.

The MC1sc or MC1 subcompact is relatively small and lightweight. It has a 3.4″ barrel, and with an empty magazine, it weighs a little more than one pound.

Today’s shooter has a broad selection of subcompact pistols from which to choose. Mossberg seems to have recognized this as the company attempts to differentiate itself with a number of features such as:

CONFIRMATION: A Mossberg representative confirmed that the MC1sc will feed from Glock 43 magazines.

At launch, there are five different versions of the MC1sc that can be purchased.

A variation of the basic model is a version with a cross bolt safety. This safety is located on the frame and directly behind the trigger. I wonder how well this configuration works as it looks like a shooter’s trigger finger may activate or deactivate the safety simply by grasping the gun. This variation is otherwise identical to the basic MC1sc pistol.

If the standard 3-dot sights aren’t ideal for you, Mossberg offers two other aiming options. The first has a set of Truglo Tritum Pro sights installed.

The second optional sighting system leaves the basic 3-dot sights in place, but adds a Viridian E-Series laser unit. This unit attaches to the front of the trigger guard and uses a red aiming laser.

The final variation is the Centennial Limited Edition MC1sc. Recognizing the company’s 100th anniversary, this is a limited run of 1000 pistols with sequential serial numbers. It features 24k gold accents on the engraved slide and a titanium nitride finish on the barrel and other metal parts.

Mossberg aims to keep this gun affordable. The basic models have a suggested retail price of $421. This beats the wildly popular Smith & Wesson M&P Shield 2.0 by more than $50. It is, however, priced more than $100 above the Ruger EC9s pistols.

Stepping up to the model with the Truglo Tritium Pro sights, the suggested retail price increases to $526. If you opt for the Viridian laser sight with standard 3-dot sights, the price is $514.

As one might expect, the limited edition gold plated pistol is the most expensive at $686.

When the gun launched, several companies announced concealed carry rigs that are made for the guns. Since then, more companies have announced fits. See our full list of Mossberg MC1sc holsters here.

It will be interesting to see what the public’s response to this new gun will be.Â A gun designed for personal protection must be reliable. For it to be a commercial success, however, it has to feel good in the hand and look good enough to catch people’s attention.

The use of “sc” to indicate “subcompact” certainly suggests that a MC1 or MC1c might also be in development. If this gun sells well enough, Mossberg may have an entire line of pistols on the market by this time next year.

In my experience, Mossberg makes quality firearms. So, I have high expectations for how well this gun performs. Time will tell.

My MC1sc went back to Mossberg today for repairs, after waiting three weeks for a mailing label. Right from the beginning it has failed to fully go back into battery after being fired. I have 14 Mossberg magazines (1 6-round; 13 7-round), and the malfunction occurs with all of them. Sometimes the malfunction occurs after every shot; other times perhaps 2 to 4 times per magazine; rarely there are no malfunctions at all. The slide stops 1/4″ to 1/8″ short of going into full battery, and I have to nudge the slide forward. I have fired well over 500 rounds using Sig Sauer Elite Performance, Fiocchi, Browning, Federal American Eagle and Syntec, all with similar results. I like the feel of the gun, the take-down system, the trigger, and the way it shoots (minus the malfunction). Thanks for the review.