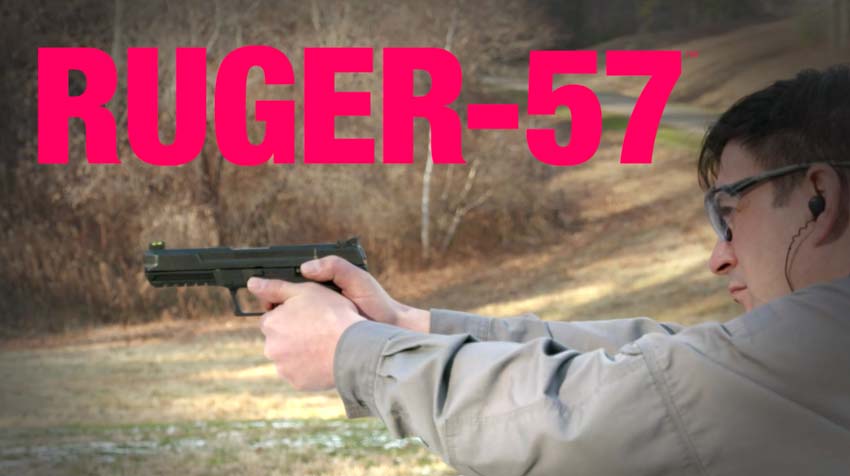 I like it when companies do unexpected things. Sometimes these outside-the-box ideas change the industry while other times they simply become a curiosity. Either way, it keeps things interesting.

The Ruger-57 is one of those unexpected pistols.

In the days leading up to the SHOT Show, Ruger is rolling out its new products for 2020. Yesterday, the company announced the Lite Rack LCP II. Today, the latest is a handgun chambered for the 5.7×28 cartridge.

Let’s take a look at what this new gun offers.

The new Ruger-57 is a full-size pistol with a polymer frame. It has a barrel just short of 5″ and a modest weight of 24.5 ounces. 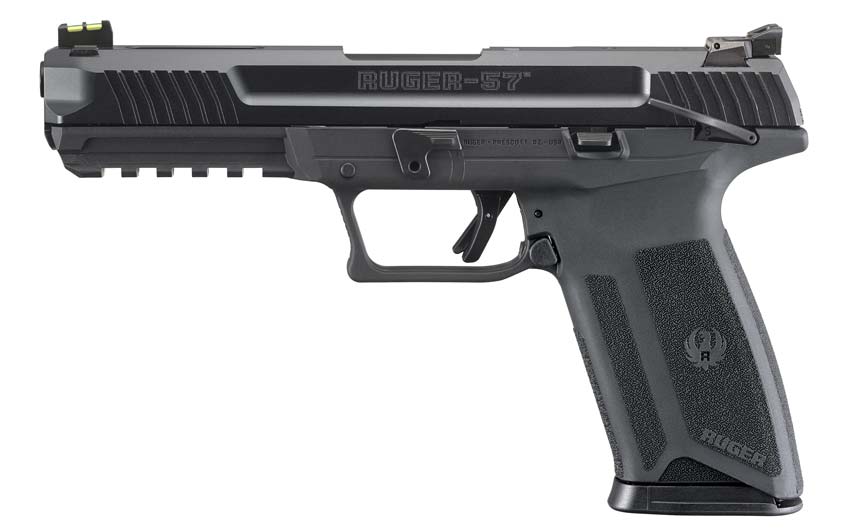 It is a semi-automatic, blowback design. Ruger designed the hammer-fired gun with a 1911-style thumb safety. The safety is ambidextrous for ease of use regardless of which hand grips the pistol.

A front fiber optic sight with a fully adjustable blacked-out rear sight is standard. The gun is red dot ready. Ruger sells multiple mounting plates for the addition of an optic like the Burris FastFire and Vortex Venom.

Standard magazines hold 20 rounds. However, the company also offers limited capacity 10-round magazines for shooters who live in less-free states.

There is a good chance that some of my readers are not familiar with the 5.7×28 cartridge. 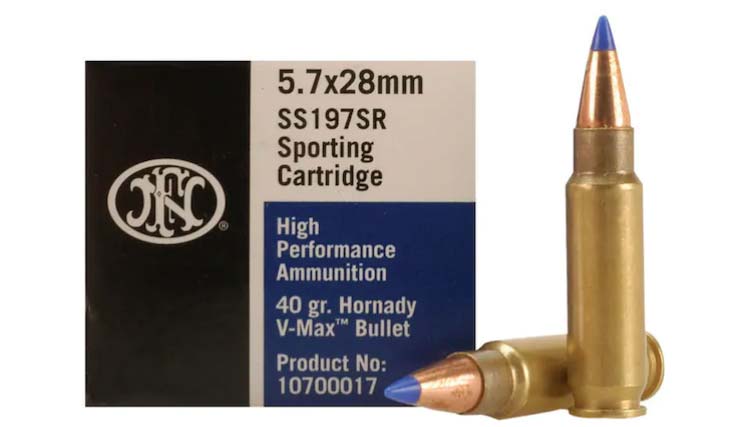 That’s understandable as the cartridge has never secured a large part of the firearms market. Nevertheless, it is a caliber that offers a blend of low recoil, high velocity and the reliability of a centerfire round.

In general terms, it is a cartridge with a bottleneck case and a bullet with a diameter of 0.224″ (5.7mm.) Bullet weights range from about 20 grains to about 50 grains. The cartridge could be thought of like a thinner, shorter .221 Fireball though I have no information that suggests the Fireball directly influenced the 5.7×28 design.

Lightweight projectiles tend to make for less recoil and increased velocities. In my own testing, for example, I found the SS197 load with a 40 grain Hornady V-Max bullet averaged 1,683 fps from a 4.8″ barrel.

FN Herstal developed the round in response to a NATO request for a small arms cartridge that could be fired from a pistol and personal defense weapon (PDW) and could penetrate body armor. Although the cartridge and companion firearms were never adopted in any significant quantity by military units, the cartridge and guns have found use in law enforcement and sporting contexts.

Other than the new Ruger-57, there are few companies manufacturing firearms chambered for this cartridge. FN builds the Five-seveN pistol and PS90 rifle chambered for the 5.7×28. There are also several smaller companies that make or previously made specialty guns for the round including the AR-57 and Masterpiece Arms MPA 57. 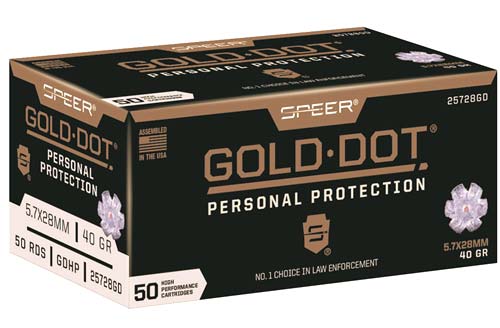 While ammunition selection is fairly limited, Speer introduced a new Gold Dot defensive round for the 5.7×28 at the same time Ruger released this new pistol.

For self-defense, predator control or just plinking on a camping trip, there is a good chance you will need a holster for your new Ruger-57. Fortunately, Ruger had the good sense to work with a number of companies to ensure there would be carry rigs available at launch.

Check out my Ruger-57 Holsters Guide and see what is available.

I have a positive first impression of the new Ruger-57. 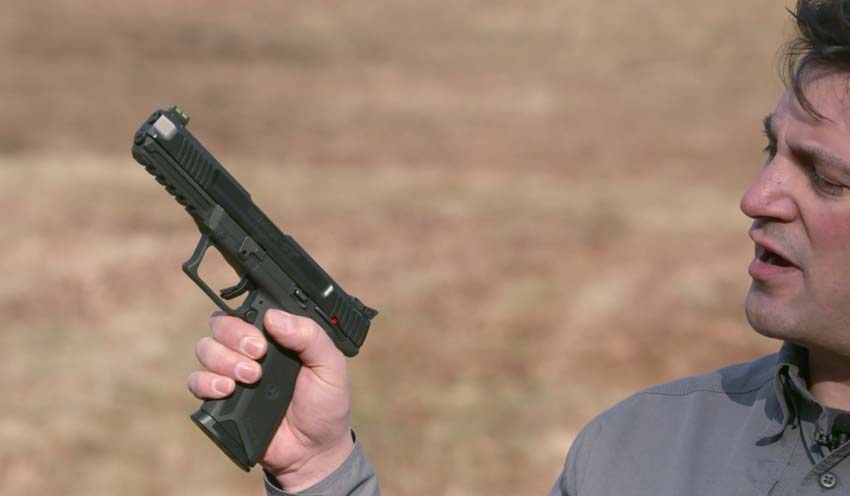 As I always say, the proof will be in the shooting. Even so, I am intrigued by this gun and have high expectations for its performance and the amount of fun it can provide.

The guns are not cheap by Ruger standards, but it is an all-new design and there are costs associated with that. Compared to the FN Five-seveN, the pistol is significantly less expensive – by more than $600. That will definitely bring more shooters to the 5.7×28 niche. I hope that means we will see more ammo made for it as well.

Had one ordered for weeks, still waiting! People giving up and buying other brands! Pre paid for mine so will wait !

The combination of this being a new product, high interest and surge of buying during a national emergency has made it difficult to land one of these guns. Supply will likely catch up to demand shortly.

I lucked out and found one at a local gun store yesterday. Wasn’t listed on line and I had been inquiring about transfer fees and planning to purchase out of state and have it shipped. My jaw dropped when they said one had just arrived. I called and immediately purchased it. I paid FAR less than Ruger’s MSRP and a bit more than the best price I’d seen online (but out of stock). Happy to support the local stores honestly. I’ll have to drive two hours out of town to shoot it given the current situation. Managed to find a few 50 round boxes of ammo as well at about 40 cents a round. I ended up paying almost twice that for .223 recently during an “emergency” run to a local store for ammo.

I purchased a ruger 5.7 and i love it! Man it ejects rounds pretty far.. If ya reload good luck finding rounds in grass ha ha! Flat shooting, no recoil at all and hot rounds… I actually bought some fragmenting rounds and shot at small empty propane tank and it travels so fast still went through both sides. Good luck finding ammo out there but if ya can find it, you are very lucky.. Love this gun, dont like the ammo crisis.. I find ammo from $22/ box to $40/box thats crazy