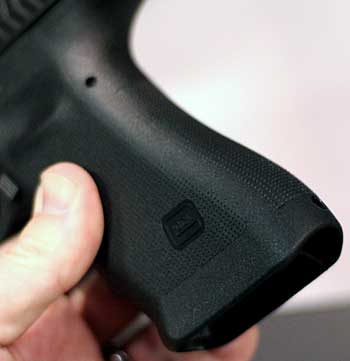 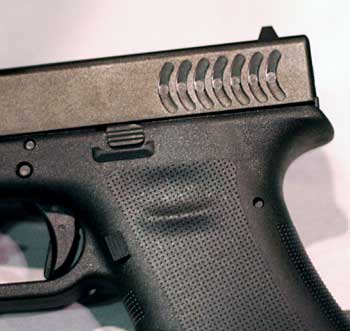 Fortunately, the Glock representative told me that the RTF2 was limited to the Glock 22 at this time.Â  Additionally, the G22 can still be purchased with the normal third-generation frame.Â  If the RTF2 proves to be popular, the Glock 17 will be the next firearm to receive the treatment, followed by others in the line.

I caught a bit of heat after the 2009 SHOT Show when I posted that I was not impressed by the third generation Glock pistols with the RTF2 texture. Â I didn’t much like the texture, nor did I think the groovy design of the crescent moon slide serrations did much for the user.

Shooting standard-pressure practice rounds did not cause my hands to bleed, but after 30 minutes, my hands were pretty well scuffed up. Â I looked like I had gone over the handlebars of my bike and caught asphalt, rather than spending just a few minutes shooting.

Maybe I do have ‘girly’ hands, but I don’t think so. Â I work with my hands (and not just on a keyboard.) Â On my days off, I’m far more likely to be holding a shovel than a TV remote.

Shooting for 30 minutes was fine, but I wouldn’t want to be on the range all day with one. Â And yeah, for me that is a regular happening, thanks.

Although I didn’t think of this potential problem when I first reported on them, the RTF2 pistols are pretty rough on clothes. Â After the pistols hit the market, I started hearing complaints from police officers that the rough texture was prematurely wearing out their uniform shirts. Â Oops.

In the 30 minutes I spent shooting an RTF2 Glock, I managed to ruin a darn nice golf shirt. Â Using an exposed, strong-side belt holster, I really damaged the side of my shirt. Â Serves me right, I suppose, for wearing a nice shirt to the range.

The crescent moon slide serrations are a mystery to me. Â They don’t seem to do anything more than the standard Glock serrations. Â Frankly, they appear to be for looks only. Â To me, they don’t add anything (looks or otherwise) to the design. Â In my mind, it goes back to the old adage, ‘don’t fix what ain’t broken.’

The RTF2 Glocks are good for military guys who are in combat. Â The finish does provide better friction for the hand, and gloved hand, to hold on to.

For law enforcement and everyone else, I don’t see that the RTF2 offers enough positives to overcome the negatives. Â Regular training and carry will wear out exposed skin and clothing. Â In my opinion, the Gen 2 or Gen 3 finish is fine.

The Gen 4 Glock pistols offer a variation of the RTF2 (called, oddly, the RTF) that is more aggressive than the Gen 3 finish, but not as sharp as the RTF2. Â I’ve shot the Gen 4 Glocks, and I really like the finish on those. Â If you are a prior generation Glock owner, skip the RTF2 and take a look at upgrading to the Gen 4.

As much as I love the 1911, (best ergonomics and grip period!) any 45 acp is better than any 40cal! A 45 glock is a great gun and one would not feel underarmed with one! I love everything about glocks except the trigger! I hear great things about the XD but they are really blocky and ugly-so I like the 1911 the best. BTW tuppaware is “ok” on 1911s, Wilsons polymer hi-cap narrow grip is probably the best polymer 1911 around. Still the 1911 deserves al the steel frame and slide!

Perfection, huh? Here’s proof that Glock effs up just like every other gunmaker.