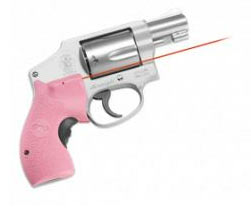 Crimson Trace is making pink versions of their lasers for the Smith & Wesson J-frame and the Ruger LCP. Â According to Crimson Trace, these pink lasers are part of the “…ever-growing number of products aimed squarely at the female market…” Â Crimson Trace stated they had customers asking for their products in colors other than black, and some female customers specifically requested pink.

While I have no doubt that pink was requested by some women, I have to wonder about the stereotypical choice of pink matched to small guns that I have seen many ignorant men push onto women as a self-defense gun. Â I’m sure you’ve heard the “Little gun for the little lady” BS before. Â I know I have seen it more times than I care to recall.

Maybe the marketing research done by Crimson Trace supports the decision to offer pink on just these two pistols.

I’d rather see pink offered as an option on larger pistols, such as what Smith & Wesson did with their “JG” edition of the full size M&PÂ (of course, the color had more meaning than “just for women.”) Â Of course, I think the Walther attempt to go pink was pretty cool.

There is nothing wrong with marketing to women, but I don’t know if “pink for small guns” is the right way to go.

i agree! i like pink guns, but i also dont shoot “girl” guns. Glock 30. I wouldnt consider it a “girl” gun. But i did stumble across this website looking for pink laser to put on my gun. i do not like that they only make pink guns in small guns. i would also love a pink 30 30. 🙂