Fresh off record breaking profits in the first quarter of fiscal 2013, Smith & Wesson is looking to the future, reducing operating costs and gearing up for increased production of the M&P pistol line.

According to a press release from Smith & Wesson, Q1-2013 (ending August 31, 2012) was quite good for the company with record net sales and profits plus a reduction in operating costs.

Smith & Wesson specifically pointed out that the increased sales volume of polymer pistols increased the gross profit margin.Â  While the M&P is the most visible component of the companyâ€™s handgun line, one cannot discount the impact of the SD line of handguns.

I previously reviewed the SD40 pistol and found it to be an exceptional pistol at the price point.Â  Since then, Smith & Wesson updated the line to the SD-VE series (in 9mm and .40 S&W), and dropped the MSRP on the guns below $400.Â  A reliable handgun for less than $350 out the door is a sweet place to be in if you are selling handguns, especially one with an iconic brand. 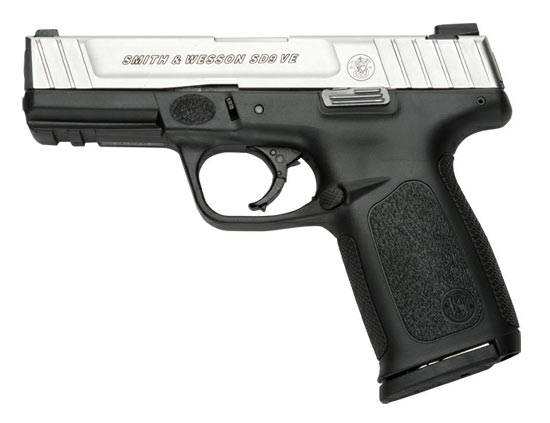 It should be noted that the decreases in operating costs and increases in profit are in spite of, or perhaps because of, increased profit sharing and incentive compensation.Â  Profit motive at the individual level is a strong motivator, just as it is for the company as a whole.

One thing I did find interesting when reading back over the Q1-2012 report, is that two of the guns specifically mentioned as helping sales, the Bodyguard and the Governor, were not mentioned at all in the press release, updated Investor Presentation or ensuing analysts call. Â Another gun mentioned as a good seller last year was the Sigma pistol, which has been officially dropped from the S&W catalog.

I sat in on the analysts call this afternoon, and, not surprisingly, much of the call dealt with the companyâ€™s financial outlook.Â  From my perspective, it sounded like the company was doing well and I was more interested in what guns the company is going to be introducing in the coming months.

About six months ago, the company was hinting at the M&P Shield in that conference call.Â  This time around, there were not any strong hints that I picked up on.Â  However, that doesnâ€™t mean I didnâ€™t pick up any information.

Digging into the Investor Presentation dated September 2012, we can see that Smith & Wesson has a â€œtwo marketâ€ approach on gun salesâ€Â  consumer and professional.Â  On the consumer side, S&W is focusing on concealed carry, personal protection and recreation (listed in that order).

Additionally, Smith & Wesson is aggressively expanding market share in the consumer market for the M&P platform and polymer pistol unit.Â  The two areas were listed separately, suggesting that the SD line of pistols will continue to be an important part of the companyâ€™s line up.Â  Also, donâ€™t forget that the M&P line includes AR-style rifles.Â  More on that in a minute.

A â€œnew product pipelineâ€ is listed as part of the companyâ€™s consumer market strategy.Â  So, I doubt the Shield was the last interesting new gun from Smith & Wesson we will see for a while.Â  In fact, elsewhere in the Investor Presentation is a full slide titled â€œNew Models for the M&P Platform.â€

On the â€œNew Models…â€ slide are the words â€œNew and exciting entries for polymer pistol category.â€Â  New and exciting?Â  The does make one wonder.Â  Concealed carry, personal protection and recreation are listed under that heading.

Also on the â€œNew Models…â€ slide is an entry for the M&P rifles.Â  The M&P rifles are AR-style guns, with the majority of them being chambered in 5.56 NATO.Â  The company introduced a few other calibers in the past, including an AR in 5.45×39 and another in Â 300 Whisper.Â  The slide lists â€œAdditional calibers and models for the M&P Modern Sporting Rifle platform:Â  Hunting.â€

It may be a little late in the year to introduce a new deer hunting gun, so I expect we will see some new hunting M&P rifles at the 2013 SHOT Show.Â  We might get to see something at the 2012 NASGW Expo, but time will tell.

One point S&W made in the presentation is that new guns will only be announced when the firearms are ready to ship to the dealers.Â  If you consider the recent launch of the Shield, you will recall that S&W lined up a number of holster and accessory makers plus had the guns ready to ship to dealers when the official announcement was made.

The final part of Smith & Wessonâ€™s consumer market strategy is to leverage the professional market.Â  In other words, as the M&P continues to expand in the law enforcement market, S&W can use that to help sell guns in the consumer market.Â  That strategy is the one that I believe helped Glock become as popular as it is in the USA.

The information presented in this article is NOT intended as financial advice. Â I am NOT someone you should ever listen to for financial advice. Â I do NOT offer the above information for anything other than entertainment. Â If you use this article to assist you in makingÂ financialÂ decisions, you are a fool. Â If you have interest in making an investment in Smith & Wesson, you should go read the report for yourself, talk to an experience investment advisor and forget you ever were here.

One reply on “Smith & Wesson Posts Another Record Quarter; Looks to Future”

S&W had really suffered during the 1990’s and into the 2000’s with the rapid encroachment of Glock into the law enforcement arena. The demand by all shooters for lighter handguns was a little slow to the “big gun” ears of the S&W leadership. It’s nice to see an All-American gun manufacturer finally respond to the latest advancements in weapons manufacture and customer demands.

The M&P line of firearms has perhaps single-handedly placed S&W back in the race as a premier gun maker. The way that S&W marketed the M&P Shield may set an industry standard for new releases in the future. Having secretly negotiated contracts with many well-known holster and accessory makers before the release of the Shield, S&W avoided what several manufacturers have struggled with in recent years – the ability to field their product with the particular needs and desires of their customers.