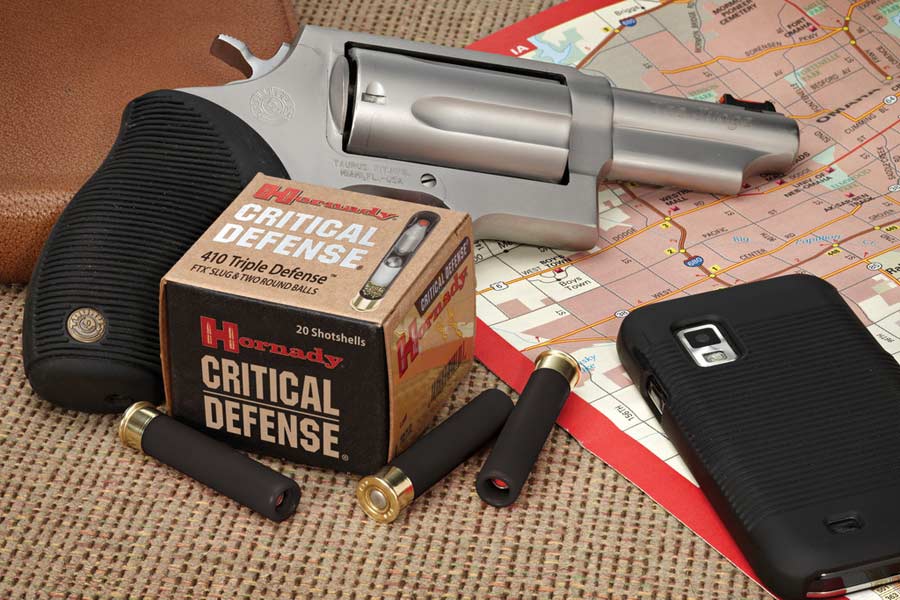 Hornady Triple Defense ammo is a new load specifically designed for the Taurus Judge and other similar .410/.45 Colt revolvers. Â This new load is part of the company’s Critical Defense line of ammunition.

This specific round stacks a non-jacketed (bare lead only) FTX slug on top of two .35 caliber round balls. Â Standard 00-buckshot is .33 caliber and 000-buck is .36 caliber. Â So, the two balls are slightly larger than 00, but not quite 000-buckshot.

The balls are made of a lead alloy that is high in antimony and cold swaged. Â This makes the pellets a harder, which allows for deeper penetration and less deformation. 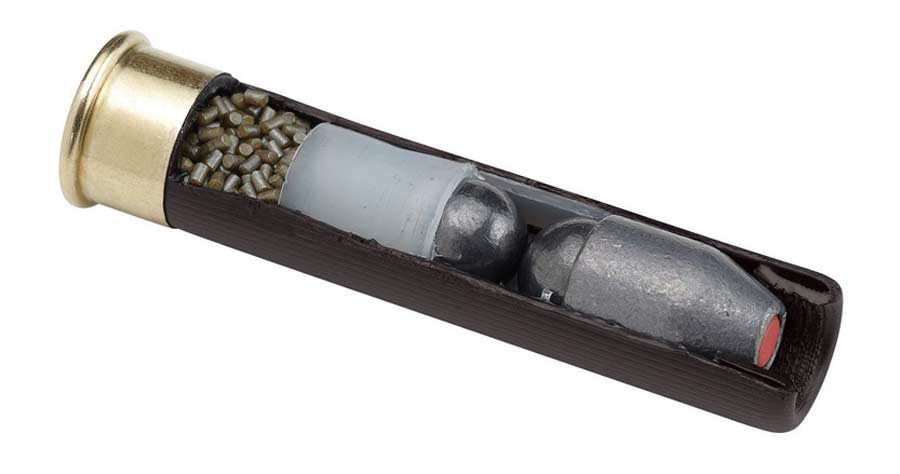 The FTX slug is a new design in the Hornady line up. Â Like other FTX designs, the slug uses a polymer tip that fills the hollow cavity in the bullet. Â This helps prevent foreign matter from clogging the bullet, and helps ensure expansion by compressing and forcing the bullet open.

Unlike other bullets in the FTX line, this slug does not have a jacket. Â Every other FTX bullet uses a copper jacket, but the slug in the .410 Triple Defense has none. Â There are a variety of reasons that might have prompted Hornady to forgo a jacket, but one of the most likely is to ensure rapid expansion of the slug. Â Without a hard jacket, the soft lead can more easily open up when striking the target.

Several manufacturers have introduced .410 shells specifically for the Taurus Judge line of revolvers. Â One of the more talked about is the Winchester PDX1 410 load. Â That load stacked three plated disks on top of 12 BB’s. Â I don’t know that it is any more, or less, effective than a conventional buckshot load. Â However, I am convinced that I would not want to be on the receiving end of such a shot.

The Hornady .410 Triple Defense definitely looks like a fight stopper. Â Shot placement matters far more than bullet design, but the Triple Defense looks formidable. Â If you are using a Judge or S&W Governor, you should definitely consider this ammo load.

2 replies on “Hornady .410 Triple Defense Ammo for the Taurus Judge”

[…] ammo for the JudgeÂ at the 2009 SHOT Show. Â Hornady Manufacturing took a little longer, but has aÂ Judge load called the .410 Triple DefenseÂ that uses a FTX slug plus two .35 caliber […]