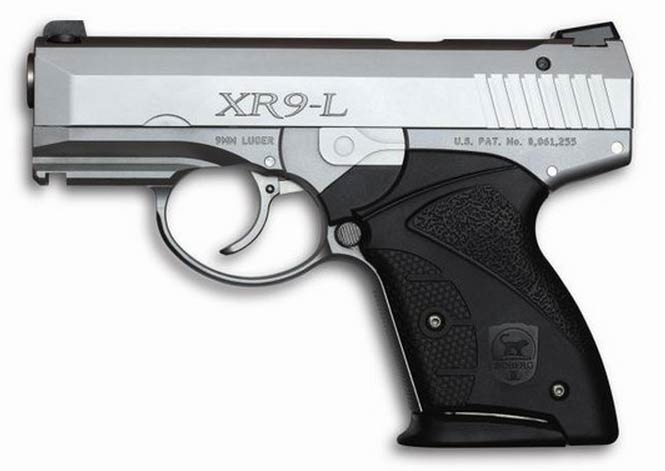 The Boberg XR9-L is a new addition to the company’s ingenious concealed carry line of pistols. Â There are a lot of unique features to this pistol that are explained farther down. Â If you are already familiar with the pistols, I’ll quickly fill you in on the differences in this model.

Essentially, the XR9-L is the same gun as the company’s original XR9-S, but with a little added on to the end of the barrel and slide. Â It has the same length grip and overall height. Â It is the same width. Â The magazines are the same.

Probably the biggest difference in the barrel lengths is seen in the ammunition performance. Â At almost a full inch longer, one could reasonably expect velocities to increase about 50-75 fps depending on the load of ammunition used. Â The good folks at Ballistics by the Inch have put together a great chart showing how ten different 9mm loads perform from different length barrels.

Of course, the longer sight radius can help improve accuracy, and the extra length and weight can help absorb recoil. 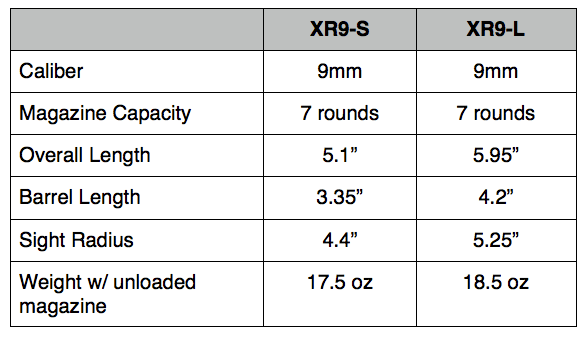 The new XR9-L pistols come in three variations: Â Onyx (self-lubricating, all black finish), Two-Tone and Platinum. Â The Platinum version features a proprietary finish that Boberg describes as “Nickel/Chrome Satin Sheen.” Â Grips can be had in black, red or OD green. Â All pistols ship with two magazines.

Pocket Guns & Gear has a multi-part review of the Boberg XR9-L at their site. Â It is worth the read.

The Boberg Arms Corporation is a relatively new firearm manufacturer with the original XR9-S as their first commercial gun. Â The XR9-S is an amazingly compact 9mm pistol with a significantly different approach. Â The XR9-S uses a ‘pull-back’ feed mechanism that draws a cartridge off of the magazine, to the rear, and into the chamber, which sits (roughly) above the web of the firing hand. Â The trigger on the XR9-S is positioned about halfway down the barrel.

Think of a pistol as almost a bullpup design, but with the magazine forward of the chamber. Â Oh, and the ammo is fed backward into the magazines. Â Confused yet?

According to the Boberg website, only one other pistol has ever attempted this type of mechanism in the past, and it was in the early 20th century. Â That pistol, the Mars, was not terribly successful. Â But, thanks to modern manufacturing techniques, Boberg has been demonstrating some very reliable pistols.

There are some huge benefits from this style of pistol when compared to more traditional designs. Â One of the most obvious is barrel length vs. overall length. Â By moving the chamber father back, you can increase barrel length without increasing overall length. Â Don’t believe me? Â Let’s take a look at a comparison to the Glock 26, a popular 9mm pistol.

The Glock 26 is a 9mm subcompact pistol using a 3.46″ barrel and has a published overall length of 6.29″. Â According to Arne Boberg, the designer of the XR9 pistols, the Glock’s overall length is actually 6.6″ when measured from the rear of the backstrap to the front of the slide.

Based on Boberg testing of 47 loads of 9mm ammunition, the XR9-S nearly duplicated the G26 velocities and bullet energy.

Among the other benefits of the XR9-S as cited by Boberg:

One reply on “Boberg XR9-L: Longslide Version of this Unique Pistol”