Daniel Defense has already established themselves as a first rate rifle and component manufacturer, so it was no surprise to visit their booth at SHOT Show this year and find another great design: Â the Daniel Defense ISR.Â  The ISR, or Integrally Suppressed Rifle, was designed from the ground up to be one complete package, which I explain below.Â  The official model number is DDM4ISR 300.

The Integrated Suppressor (IS)

Matt Mozak of Daniel Defense walked me through the latest, greatest DD rifle.Â  The rifle is designed to be a weapon system, and not just a rifle with accessories added.Â  To accomplish this, Daniel Defense developed and added their all new Integrated Suppressor (IS).Â  The integrated suppressor is threaded, pinned and welded to the rifleâ€™s proprietary lSR gas block, in what Mozak called a monolithic baffel.Â  So the IS becomes a permanent part of the rifle, and not simply an interchangeable accessory.Â  The length of the barrel and Integrated Suppressor together is 16.145â€.

Although the integrated suppressorÂ is permanently mounted to the rifle, the Integrated Suppressor Rifle will still be regulated by the ATF through the National Firearms Act (NFA).Â  That means the extra steps, money, and a Tax Stamp to own one.Â  Daniel Defense also recommends checking with State and Local laws to ensure that it is legal to possess where you live.

Suppressors, like everything else on a firearm, need to be cleaned occasionally.Â  Daniel Defense developed screws on the muzzle end of the integrated suppressorÂ that allow a stainless steel â€œmono coreâ€ baffle to be removed from the can and cleaned.Â  Daniel Defense provides the tool necessary to complete this process.Â  Then the shooter can return the â€œmono coreâ€ to the can, secure the screws, and be ready to fire again.

I really wanted to see that removable core in action, but Mozak said the proprietary features of the Integrated Suppressor were not being shown on the SHOT Show floor.Â  I can understand that completely.Â  Competition often brings out the best, and the worst in people.Â  SHOT Show is the grand bonanza of the shooting industry, where almost everyone shows off all their latest inventions.Â  All that is done right in front of their chief competitors, and wandering eyes.

Prior to completing this article I touched base with Jordan Hunter, the Director of Marketing for Daniel Defense.Â  He graciously responded with some extra meat needed to properly display this new rifle.

Daniel Defense has mated the integrated suppressorÂ with their Modular Float Rail 12.0.Â  This rail provides a continues Picatinny top rail, and then allows the shooter to customize the side and bottom rails to fit their needs.Â  Rail sections come in 3â€ sections.

The Integrally Suppressed Rifle is made of aerospace aluminum, while the integrated suppressor is made from stainless steel and 17-4PH Monolithic Baffle. 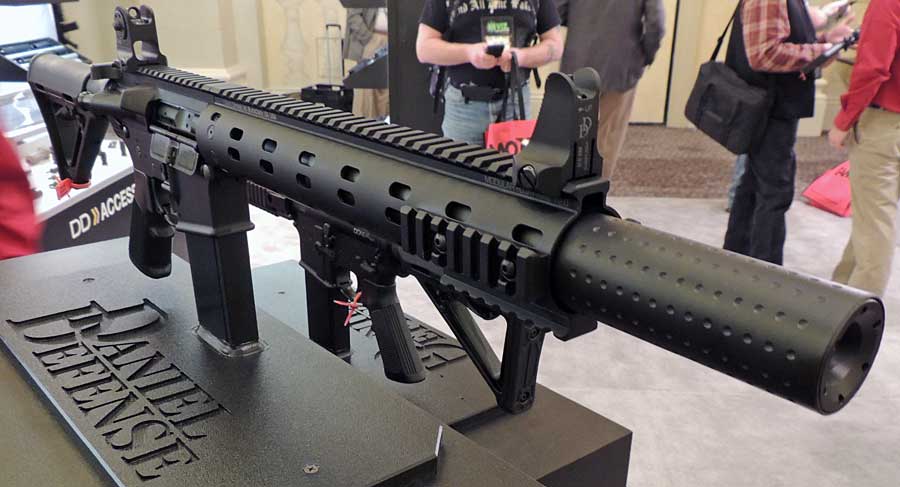 The Daniel Defense ISR is currently only available in .300 BLK.Â  Mozak told me that the new rifle should begin shipping in April 2013, however they have already sold out their 2013 capacity to their distributors – no surprise there in this market.Â  If youâ€™re interested in this rifle donâ€™t contact Daniel Defense to order.Â  Instead track down the dealers that are getting these rifles from the distributors, and hope that you checked before they have sold out their allotment.

Daniel Defense is very proud of their products, and rightly so.Â  Everyone that Iâ€™ve ever talked to who owns or has shot one has given an enthusiastic thumbs up.Â  The reputation of Daniel Defense is well known, and the company offers a 100% warranty from defects on original materials and workmanship.

With the explosion of .300 BLK rifles last year, and the increased potential for firing suppressed sub-sonic rounds through an AR-platform, the rise in popularity for rifle suppressors may be at an all-time high.Â  For sure, suppressors have been around for a long time, but most shooters havenâ€™t considered them practical or affordable for their hunting rifles or pistols.

Indeed, the ATF red tape on suppressors, and some state prohibitions against suppressors, have led many to completely write-off even the idea of using a suppressor.Â  Â  Â  However, over the last several years, many states have lifted restrictions after pro-gun legislators have been educated on the benefits that a suppressor can offer to the shooter and anyone nearby.Â  This fine rifle may have a few more people competing that paperwork.

I know this has nothing to do with the article, but the thought is stuck in my head and I have to pass it off. I was thinking of some old movies where the shooter would mount a silencer on his/her REVOLVER. When he/she fired it the sound was a “fffffft” as though the cylinder/frame gap had vanished. There! Thanks for the therapy!