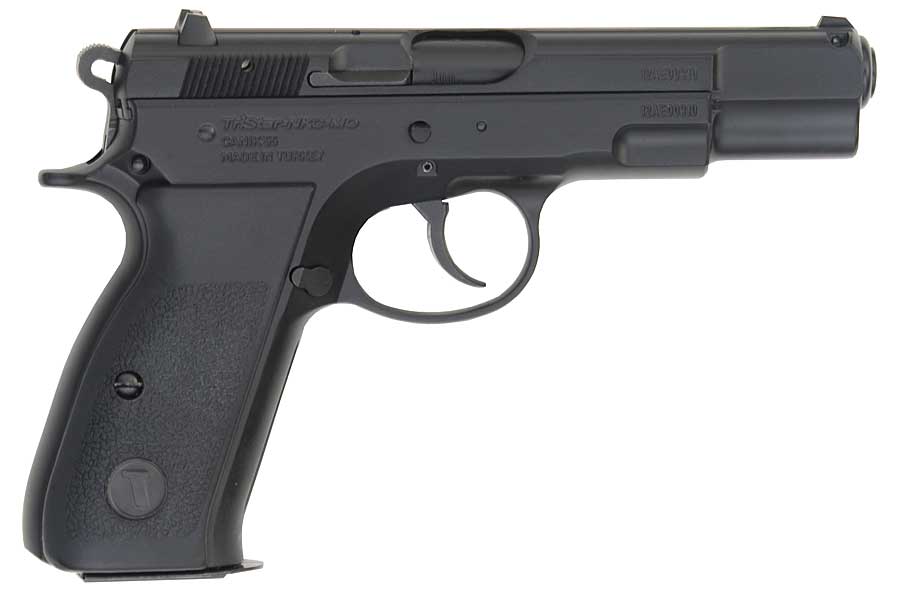 TriStar Arms added a number of new personal defense and target shooting handguns for 2013. Â I am not terribly familiar with the TriStar line of firearms, but according to the company, they only recently got into the handgun market when they introduced their first pistols in 2012.

The new TriStar pistols are chambered in 9mm and .40 S&W and come in a variety of finishes and sizes. Â Two of the pistols, the TP semi-auto handguns, are polymer framed guns. Â The other pistols are traditional metal framed handguns.

MSRP on the TriStar handguns run from $429 to $469. Â Street prices may dip below $400 on some models. Â It will be interesting to see how these guns perform on the range and in sales when compared to other pistols in this price range. Â There are certainly a number of players in this price range, and big names like Ruger and Smith & Wesson certainly have an edge on brand name recognition.

Each of these pistols ships with two magazines, a cleaning kit, a gun lock and hard case. Â The guns come with a one year warranty.

The TriStar C100 is one of two models available in both 9mm and .40 S&W calibers. Â This model appears to be a mid size gun with a 3.9″ barrel. Â It has a traditional double-action/single-action (DA/SA) trigger.

The P120 is a larger gun than the C100, but it is only available in 9mm. Â The barrel is 4.7″ long and the total weight (unloaded) is 1.87 pounds. Â According to TriStar the P120 was developed for military use, but also is a good gun for the shooting sports. Â Magazine capacity is 17 rounds.

The S120 is aÂ heavierÂ version of the L120. Â InsteadÂ of the steel-alloy frame of the L120, the S120 uses a stainless steel frame. Â That increases the total weight of the gun to 2.26 pounds. Â Barrel length and magazine capacity remain the same.

Not to be confused with a Terminator model, the TriStar T100 is a compact pistol with a 3.7″ barrel. Â This gun is only available in 9mm. Â Magazine capacity is 15 rounds. Â Total (unloaded) weight is 1.64 pounds.

The TriStar T120 is a full size handgun that the company describes as being “great for home defense and target shooting.” Â It has a 4.7″ barrel. Â The gun is only available in 9mm and takes a 17-round magazine. Â Weight is 1.88 pounds. Â Like the guns described above, it uses the DA/SA trigger.

In the “one of these things is not like the other” category is the TP series of TriStar pistols. Â These handguns are polymer framed and strangely different from each other. Â The 9mm version is listed as having a 3.5″ barrel, a 1.39 pound weight and a 10-round magazine. Â Meanwhile, the .40 S&W version is supposed to have a 4.1″ barrel, 1.65 pound weight and a 13 round magazine.

I don’t know if the company is planning on two different models: a standard and a compact, but those are the specs they have published, and theÂ differentiatorÂ appears to be the caliber. Â I would think the company would make a 9mm and .40 S&W version of both sizes, and eventually they might.

The C100 in 9mm is advertised as being a “clone” of the CZ 75. Since I own both, it was a simple matter of laying the two side-by-side and field stripping them. I can absolutely attest the C100 is a perfect clone of the CZ … simply a scaled down in size version. I have now put several thousand rounds through the C100 now, and have yet to have a stoppage or a jam of any kind.

Thanks for the feedback. I really appreciate it, and I’m glad to hear how reliable yours is running.

I have put roughly 400 rounds through my T120, and surprise, NOT A SINGLE JAM!!!! I own Glocks, S&Ws, and one H&K, and everyone has jammed or misfed at some point. My T120 is now my primary care weapon, and with my new custom paint job, it looks terrifying. Just wish I could upgrade it somehow. Anyone know of where to get parts?