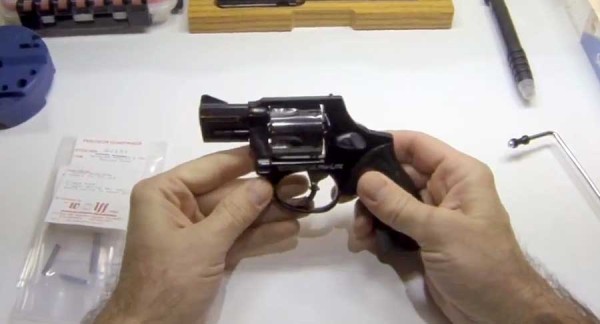 If you are looking to lighten the trigger pull on your Taurus M380 (or Taurus M85 series for that matter) immediately click over to Pocket Guns & Gear and watch Bruce’s video showing you how to swap out the trigger return and hammer springs.

Bruce uses a Wolff spring kit to replace the factory Taurus springs. Â With the factory springs, the M380 had a trigger pull weight of more than 12 pounds (the maximum his gauge could measure.) Â Once he got the new springs installed, the weight was reduced to about 9 pounds 10 ounces. Â He described the the lighter feel as “a huge difference.” Â IÂ don’tÂ doubt it.

I have previously reviewed a Taurus 905 9mm revolver that I thought had an incredibly heavy trigger pull also. Â My trigger pull gauge, the same Lyman that it appears Bruce used for his M380 review, was not able to handle the heavy pull of the 905. Â The gauge goes to 12 pounds, but the Taurus goes well past that. Â Though the 905 was an acceptable revolver, I would have liked it much more with a lighter trigger pull.

Something of a side note, Bruce ran into a few quality control issues with the M380. Â None of them kept the gun from working, but all of them suggested that Taurus isn’t focusing their efforts on quality control on the assembly line. Â Unfortunately, I have had my own problems with a few QC issues and Taurus in the past, so I don’t know if things are improving with the company like I hoped they would when Mark Kresser was named President and CEO.