Caracal has completely revamped their pistol product line, eliminating the original F, C and SC models and replacing them with the CP660, CP661 and CP662 handguns. Â Additionally, the company introduced two completely new pistols: the CP663 and CP664.

According to Caracal, the new pistols offer “enhanced performance, interchangeable features and improved safety units.” Â What this specifically means, remains to be seen. Â But, I am guessing it relates to the complete recall of all Caracal C pistols. Â Here is what we know so far…

The CP660 is a full size pistol chambered in 9mm. Â It is a polymer framed gun and is the updated version of the original F pistol. Â The gun is striker-fired and holds 18 rounds in a standard magazine. Â Physical specification on the pistol are very similar to the original F. Â The new Caracal CP660 is 1mm wider through the grip and it is 1mm taller than the original.

Caracal has not yet released a feature-by-feature comparison of the CP660 and the F. Â However, looking at the pistol, an observer can easily distinguish between the two by the addition of forward serrations on the slide.

The CP661 is a compact pistol that is analogous to the prior C model. Â It is also a striker-fired, polymer-framed gun available only in 9mm. Â The standard magazine capacity is 15 rounds.

Dimensions of the Caracal CP661 are similar to those of the Caracal C, with only two being different. Â The new CP661 is 2mm taller and 1mm wider through the grip as compared to the C.

Caracal’s CP662 handgun is the new version of the old SC handgun. Â It is considered a subcompact model and is also striker-fired. Â This 9mm pistol holds 13 rounds in a standard mag.

The new guns do not appear to have options for the quick sights, as there was no mention of them in the company’s catalog or on the updated website. Â Additionally, the .40 S&W and .357 SIG calibers are not mentioned. Â It is not clear if these high-pressure pistol rounds will be re-introduced at a later time.

The CP633 handgun is very different from the CP660 – CP662 pistols. Â First off, it is hammer-fired, not striker-fired. Â There is an exposed hammer that operates like a traditional double-action, hammer-fired pistol. Â It is not yet clear if this is a double-action only (DAO) or a double-action/single-action (DA/SA) pistol.

A trigger pull weight of 4.4 pounds is listed. Â There is a frame mounted decocker and/or safety. Â This gun is available only in 9mm and a standard magazine holds 18 rounds. 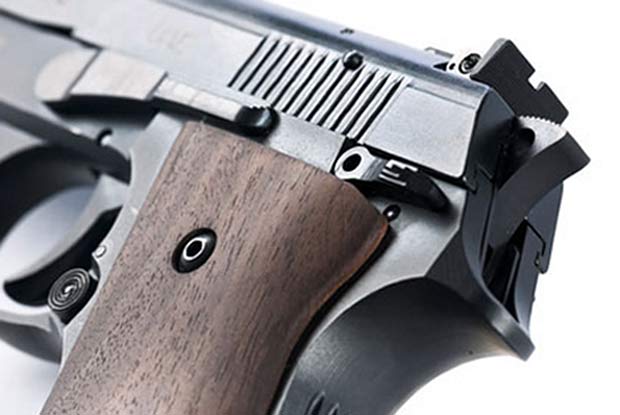 Currently, it is not clear if the frame is polymer or metal. Â It appears to be a metal frame, but appearances can be deceiving. Â One thing is certain: this gun is heavier than a CP660. Â The CP663 weighs in at more than 35 ounces unloaded. Â Compare that to 26.5 ounces for the CP660.

Caracal states this pistol is “designed for Special Forces” or “sports applications.”

The Caracal CP664 is listed as being striker-fired, with a rotating barrel lock action.

The CP664 is heavier than the CP660, weighing a little more than 32 ounces. Â Like the CP663, this gun looks to have a metal frame. Â The CP664 appears to have target sights and an ambidextrous thumb safety. Â The barrel is 3.8″ long.

I expect we will have more information on the new guns in the coming days, and will see these new pistols at the SHOT Show in January.

[…] owners can apply their refund towards the new gats. [gunholstersandgear.com has all the pics and […]

The updates to the originals still look appealing to me. I know the recall of the originals sucks and is a little unnerving, but I still like the look and feel of the guns. The other two new guns…well, I don’t think I like the look of them very much. But, who knows, maybe they will grow on me.

[…] They have just introduced the CP660, CP661, and the CP662 to replace the former line of pistols. Guns, Holsters, and GearÂ did a great write-up on the new pistols and it can be found here. Hopefully they have better luck […]

There’s a whole lotta meh in the new line. Considering the old line was a FAIL, it is hard to get excited about anything they make.